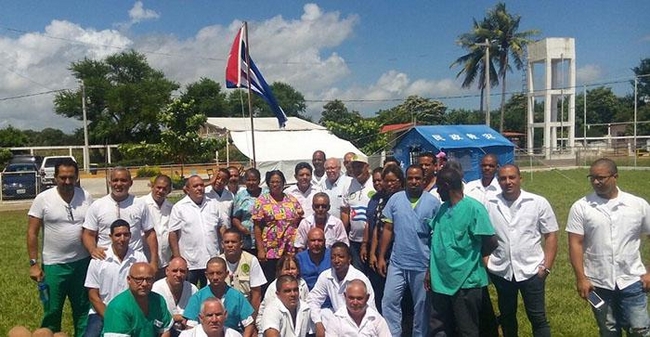 In the wake of a devastating earthquake in the Mexican state of Oaxaca, a brigade of Cuban doctors is offering its services in a field hospital at the Che-Nita Sports Center in the community of Ixtepec

The first days of October in the community of Ixtepec, in the Mexican state of Oaxaca, have been rainy, but this has not prevented older people, adults, children and pregnant women, shielded by umbrellas, waterproof ponchos and coats, for forming a line before 6:00 am every day to see a Cuban doctor.

In a field hospital at the Che-Nita Sports Center, a brigade of the Henry Reeve International Contingent of Doctors Specializing in Disasters and Serious Epidemics, with experience working in 19 countries, is offering its services to the local population.

The Henry Reeve Contingent emerged on the initiative of Comandante en Jefe Fidel Castro Ruz on September 19, 2005, to help the victims of Hurricane Katrina, which ravaged New Orleans, in the United States.

At that time, then U.S. President George W. Bush rejected the offer of assistance from Cuba, which consisted of sending 1,586 doctors, 36 tons of medicines, and elementary means of diagnosis.

However, on this occasion, the 40 members of the Cuban brigade arrived in Mexico accompanied by 10 tons of equipment, medical materials and supplies, and is offering its services in internal medicine, pediatrics, gynecology, orthopedics, traumatology, surgery, and neurosurgery, supported by imaging, psychology, psychiatry, physical rehabilitation, and a clinical laboratory, 24 hours a day.

Granma International contacted Dr. Rolando Piloto Tomé, comprehensive general medicine specialist, Master in Epidemiology, and head of the brigade, who explained that the Cuban personnel are based five hours from the capital of the state of Oaxaca, one of the poorest in Mexico.

He described the situation they found on arrival as very difficult.

“Many homes, markets, institutions, and the Hospital of Juchitan itself collapsed, and are currently being demolished.

“We are substituting the medical care provided by a 30-bed institution in the city of Ixtepec, which was partially damaged and is out of service.”

In what conditions are you providing services?

We set up two large tents. In one we offer medical consultations, the clinical laboratory and ultrasounds, while the other is devoted to the hospitalisation of patients who require admission to control and treat their condition. We have also set up tents for our collaborators to rest, for the pharmacy, and for the kitchen, where we prepare food.

We provide emergency care and carry out consultations from 8:00 am to around 6:00 pm. We have already treated 3,163 patients in a week. When a case that requires surgical treatment is identified, the Cuban specialists travel together with the patient in an ambulance to the Military Hospital and there they carry out the operation.

On Sunday, October 8, neurosurgeons operated on a depressed skull fracture with dura mater damage, which proved to be the first neurosurgical operation in Istmo de Tehuantepec. Likewise, the gynecologists have already carried out eight emergency cesareans and three complicated deliveries. In addition, we have visited the shelters where those who lost their homes are. They have been assessed by a team of specialists in comprehensive general medicine, psychiatry, psychology, and pediatrics.

In the first days we operated on three cases with multiple traumas; since then we have treated patients with chronic decompensated diseases (diabetes, hypertension, osteoarticular pain). We see many people with post-traumatic stress, both adults and children, because after the earthquake measuring 8.2 degrees on the Richter scale of September 7, there have been more than 7,000 aftershocks.

The population’s opinions regarding the medical care received?

The population’s views regarding our work have been exceptionally good, and every time they are treated they thank our country for the help that we are offering free of charge. Cuban professionals are welcomed with statements like “Viva Cuba,” “Thanks for coming to help us,” “God bless you,” and many more.

We have also been visited by government authorities and the Health Secretary of the Federal Government and the State of Oaxaca. Recently, José Narro, Secretary of Health of Mexico, visited the Cuban doctors’ camp. We have been treated very well, he said.

The print media, radio and television, have transmitted live from this hospital with interviews of our professionals and the patients who arrive for consultation.

One notable example is that by 6:00 am there are already a large number of people waiting to be seen by Cuban doctors. For example, on October 10, 407 patients were treated, even though it was raining all morning. They stood in the rain waiting to be seen.”

The mood of the Cubans?

The brigade is in very high spirits and has a very positive attitude toward the work. We feel aftershocks daily, several with magnitudes of more than five degrees, and although this creates fear, we have stayed put, offering our best. We exalt the word Revolution.