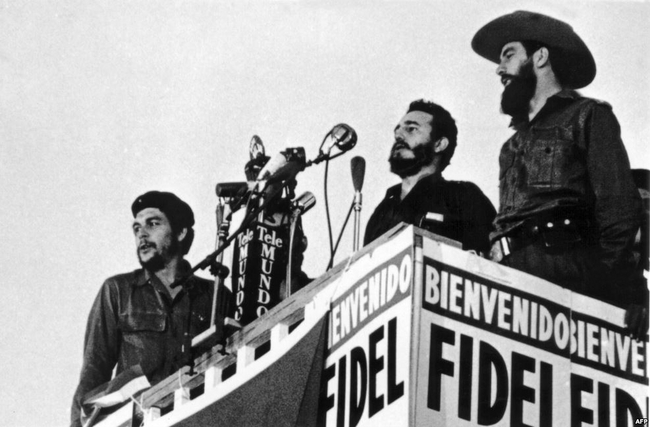 President Trump ordered the release of more than 2,800 records related to the John F. Kennedy assassination on Thursday, but bowed to pressure from the CIA, FBI and other agencies to delay disclosing some of the most sensitive documents for another six months. Even so, the thousands of pages that were published online by the National Archives Thursday evening describe decades of spies and surveillance, informants and assassination plots.

More than a dozen reporters and editors for The Washington Post combed through the documents on Thursday night. Here are some of the wildest things they found, some of which have been reported about before and some new.

Or was Fidel only worth two cents?

Another document describes the well-known CIA scheme called Operation BOUNTY that sought to overthrow Cuba’s government, and established a system of financial rewards for Cubans for “killing or delivering alive known Communists.” The CIA would let Cubans know of the plan by dropping leaflets in the air, but there were rules: A reward would be paid to an individual upon presentation of a leaflet, with “conclusive” proof of death and dead person’s party/revolutionary membership card. Cubans who played along would get a certain dollar amount based on the title of the Communist who they had killed. They’d get up to $100,000 for government officials and $57,500 for “department heads.” Castro, perhaps for symbolic reasons, would earn a Cuban only two cents.— Ian Shapira

In search of a stripper named Kitty

An FBI file contains information on the bureau’s attempt to locate a stripper named “Kitty,” last name unknown. According to the file, another stripper named Candy Cane said Kitty had been an associate of Jack Ruby, the Dallas nightclub owner who killed Oswald on Nov. 24, 1963. Leon Cornman, business agent with the American Guild of Variety Artists in New Orleans, told the FBI that “the only stripper he knew by the name of Kitty who worked in New Orleans was Kitty Raville.”

“He advised (that) Raville committed suicide in New Orleans in August or September 1963,” the report states.— Michael E. Ruane

Assassinating JFK ‘not worth it’ for Cuba

A draft report by the House Select Committee on Assassinations found it unlikely that Cuba would kill Kennedy as retaliation for CIA’s attempts on Castro’s life. “The Committee does not believe Castro would have assassinated President Kennedy, because such an act, if discovered, would have afforded the United States the excuse to destroy Cuba,” the draft states. “The risk would not have been worth it.”— Michael E. Ruane

Lyndon B. Johnson in the KKK?

In an internal FBI report from May 1964, an informant told the FBI that the Ku Klux Klan said it “had documented proof that President Johnson was formerly a member of the Klan in Texas during the early days of his political career.” The “documented proof” was not provided.— Tom Jackman

Fulgencio Batista and the plot to bribe a U.S. congressman

An internal FBI memo dated Jan. 22, 1960 discusses an alleged plot to bribe a U.S. congressman and bring deposed Cuban dictator Fulgencio Batista to the United States. The memo, citing information provided by a Miami arms dealer, says that in exchange for securing entry into the United States for Batista, $150,000 would be split between U.S. Rep. Abraham Multer (NY), a Miami Beach attorney, and two Batista “adherents” in Miami. According to the memo, the FBI took the alleged plot seriously enough to investigate but Batista himself “turned down the proposition.”— Michael E. Miller

Communist Party investigation into JFK killing
Several documents summarize internal discussions within Communist Party meetings after the assassination, discussing whether Oswald was innocent and whether communists would be blamed for Kennedy’s death. Agents ran down rumors from prisoners and poets.— Rachel Weiner

Some of the papers recounted the agency’s well-chronicled schemes to kill Castro. One document, a summary of the CIA’s plans to assassinate foreign leaders, recounted how the CIA tried to use Gen. William Donovan, the former head of the the agency’s precursor, the Office of Strategic Services, for one plot. He would give Castro a contaminated skin-diving suit while the two negotiated for the release of the Bay of Pigs prisoners.

“It was known that Fidel Castro liked to skindive. The CIA plan was to dust the inside of the suit with a fungus producing madera foot, a disabling and chronic skin disease, and also contaminating the suit with tuberculosis bacilli in the breathing apparatus,” the paper said. Donovan didn’t go through it, instead presenting the Cuban leader with “an uncontaminated skindiving suit as a gesture of friendship.”

Another outlandish plot described talks of prepping a “booby-trap spectacular seashell” that would be submerged in an area Castro enjoyed diving. The seashell would be loaded with explosives that would go off once lifted. “After investigation, it was determined that there was no shell in the Caribbean area large enough to hold a sufficient amount of explosive which was spectacular enough to attract the attention of Castro.”

Another scheme to kill Castro involved a CIA employee fluent in Spanish based in Cuba who was recruiting a high-ranking Cuban government official in 1963. The CIA officer and the Cuban actually met in Europe on the day of Kennedy’s assassination. The Cuban wanted the CIA to supply him with “some type of esoteric gadget with which he would be able to defend himself” if he got into a fight with Castro. “He had in mind some sort of pellet pen…” the document read. The agency officer didn’t have a pellet pen, but he did show his asset a ballpoint pen with a hypodermic needle “inside that when you pushed the lever, the needle came out and poison could be injected into someone.”

But the Cuban declined the gadget because it would have required him to get too close to Castro. Instead, the agent asked the CIA operative for weapons. The agency complied, sending down high-powered rifles with scopes to Cuba. The asset was never used. The case officer broke off contact in 1964.— Ian Shapira

An April 1964 memo from J. Edgar Hoover ordered the FBI to check out a report that Jack Ruby and Dallas Police officer J.D. Tippitt — fatally shot by Oswald shortly after Oswald killed Kennedy — had met at Ruby’s strip club, the Carousel Club, sometime prior to the assassination. Hoover seemed skeptical.— Tom Jackman

Many of the files reveal the FBI’s often extraordinary efforts to identify suspected communists in the United States. Dozens of documents amount to brief records on individuals whose names were drawn from the mailing list for a publication called “The Worker.” Other files include reports from associates of Hollywood figures, including screenwriter John Howard Lawson, suspected of being members of the Communist Party in California.

Some of the files predate the Kennedy assassination by nearly two decades. A collection of FBI records from 1945 record the bureau’s struggles to install and maintain a wiretap on Lawson’s Coldwater Canyon. One file describes the bureau’s plan to install a microphone at the house while Lawson was expected to be in San Francisco for a United Nations conference. But the bureau’s plans were thwarted when agents discovered “a person residing at the Lawson home” in his absence.

Lawson was one of the “Hollywood Ten”: the first group of U.S. film professionals to be blacklisted.— Greg Miller

A Communist Party small enough to fit in a car

The documents show that for years, the FBI used informants to monitor the Communist Party in Dallas – a group that consisted of 5 or 6 people — so small they could sometimes hold a meeting inside a car.— Devlin Barrett

Beef between the FBI and CIA

One memo described tensions between CIA and FBI officials that still exist today. It quotes FBI Director J. Edgar Hoover saying, “more and more we are telling CIA about our domestic operations and always to our detriment. I want this stopped.”— Michael S. Rosenwald

Many of the documents center on the activities of Cuban anti-Castro groups — including Orlando Bosch’s Insurrectional Movement of Revolutionary Recovery (MIRR) — as the FBI tried to dissuade or scuttle their plans for armed invasions of the island. One FBI document from June 1959 predicts an uprising against Castro that never came: “… Conditions are getting so bad in Cuba that it can well be that a counterrevolution will occur from within Cuba, rather than waiting for any invasion force from outside… powerful interests, such as bankers, sugar institute, et cetera, are extremely dissatisfied.”

Similarly, another 1959 FBI report relays intelligence on a Cuban exiles jockeying to replace Castro if he were to be overthrown, an outcome seen as all but assured. The same document cites the prediction by an informant that Castro “cannot last more than two months.”— Michael E. Miller and Greg Miller

The records also reveal a deposition given before the presidential Commission on CIA Activities in 1975 by Richard Helms, who had served as the agency’s director. After a discussion of Vietnam, David Belin, an attorney for the commission, turned to whether the CIA was involved in Kennedy’s killing.

“Well, now, the final area of my investigation relates to charges that the CIA was in some way conspiratorially involved with the assassination of President Kennedy. During the time of the Warren Commission, you were Deputy Director of Plans, is that correct?” Belin asked.

After Helms replied that he was, Belin then asked: “Is there any information involved with the assassination of President Kennedy which in any way shows that Lee Harvey Oswald was in some way a CIA agent or agent…”

Then, suddenly, the document cuts off.— Ian Shapira