Under siege Cuba deserves our support 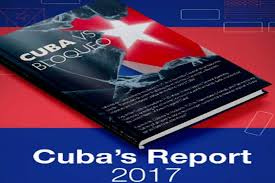 Cuba’s 2017 UN resolution and report, entitled Necessity of Ending the Economic, Commercial and Financial Blockade Imposed by the United States of America against Cuba, summarises the negative impac

On November 1 the United Nations general assembly will vote for the 26th consecutive year on a resolution calling for an immediate and unconditional end to the United States’s blockade of Cuba.

In 1991, when Cuba first presented its case to the UN, no vote was held as many countries succumbed to pressure from the US and forced the resolution to be withdrawn.

The following year it was successfully heard — gaining 59 votes in support, three against (US, Israel, Romania), 71 abstentions and 46 absences.

Since then, Cuba has won increasing support and votes for its position from the international community.

Simultaneously, the US itself, and its policy of aggression and blockade, has become progressively more isolated.

The abstentions and absences have fallen away and in recent years votes have been near unanimous in support of Cuba.

It took the US 24 years to finally admit its policy had been a failure. On October 26 2016, in a historic vote, the then US ambassador to the UN Samantha Power abstained, making the final count 191 in favour to two abstentions — Israel voted with the US as it had for the previous 25 years.

In her speech, Power told the assembled heads of state and international diplomats that her government was abstaining because its policy had failed to achieve its goals and had only served to isolate the US.

If President Donald Trump is to be believed, such acquired wisdom will be undone on November 1 when the US looks set to revert to its old “cold war” ways by voting in favour of the blockade again.

In the last few weeks Trump has called the island “corrupt and destabilising” and has threatened to take “decisive action” against it. He frequently criticises Barack Obama’s policy of rapprochement, and has bragged he would get “a better deal.”

Regrettably it is not all bravado. He is beginning to make good on his words — unpicking Obama’s limited openings and tightening the blockade again.

On June 16 Trump announced a new policy directive which will limit the Cuban state companies that US business can work with; reduce the categories of travel visas available for US citizens; and oppose calls to end the blockade in international forums such as the UN.

On Friday September 8, just as Hurricane Irma hit the island, he quietly signed the Trading with the Enemy Act, extending the blockade for another year.

His actions ignore US public opinion, including Cuban-Americans in Florida, the views of business and many in his own party — the majority of whom believe the blockade an obsolete policy that should be lifted.

Cuba’s 2017 UN resolution and report, entitled Necessity of Ending the Economic, Commercial and Financial Blockade Imposed by the United States of America against Cuba, summarises the negative impact of the policy on the country from April 2016 to June 2017.

Its key message is that the “blockade against Cuba is still in force and is being fully implemented.”

Damages across almost six decades are estimated to have cost the Cuban economy $130 billion in today’s prices. In the last 12 months alone this equates to more than $4.3bn.

The Cuban government estimates that this annual cost is twice the amount the country needs to fully develop its economy. Aside from the obvious economic impact, Cuba denounces the blockade for being “a massive, flagrant and systematic violation of the human rights of all Cubans and qualifies as an act of genocide under the Convention on the Prevention and Punishment of the Crime of Genocide of 1948.”

Every sector of society suffers, but education, health, sports, culture, industrial development, tourism, food and information and communications technology are most afflicted.

Cuba’s report attempts to quantify the cost to all of these sectors from increased freight charges to human resources, extra transport insurance, handling costs, storage, and the use of intermediaries needed to work around the debilitating US policy.

In health alone, $87 million extra blockade costs were incurred in 2016-17 attempting to acquire medicines, spare parts, and specialist equipment. One million of this was used to send patients for treatment abroad because they could not access the US technology which would have enabled them to be treated at home.

There are hundreds of examples, but the report highlights just a few, including European companies that stopped supplying orthopaedic prosthesis which forced Cuban patients to suffer with a lower-quality product; refused to supply equipment to diagnose prostate cancer; and stopped providing injectable antibiotics. All because the blockade prohibits them.

Exports are equally impaired. Many cases are documented — aside from the obvious loss in cigar sales to the US market, estimated at $117m annually. For example, Cuba’s nickel industry, one of the few raw materials the country mines, was prevented from exporting 3,500 tons of the mineral in 2016 because no bank would give credit. Added to this the increased costs of having to import sulphur (essential for nickel production) from the Middle East at 24 per cent higher than readily available in the US.

Less detrimental to the Cuban economy but an illustration of the farcical aspect of the blockade was PayPal’s decision to cancel payments by 100 customers who tried to buy tickets for the premier of the documentary Havana Moon: The Rolling Stones Live in Cuba in European cinemas.

The company claimed that the description of the transaction included the words “Havana” or “Cuba,” which was an infringement of Office of Foreign Assets Control (OFAC) regulations.

The extraterritorial impact on Cuba’s ability to work with other countries and its embassies to function around the world receives special mention. Almost every Cuban embassy has experienced difficulties from having bank accounts closed to mail returned, and being unable to process visa payments or hire embassy cars.

Contrary to appearances, under Obama there was “a rise in fines on foreign companies which has contributed to growing reluctance by international banks and companies to work with Cuba for fear of fines and persecution from the US Treasury Department,” states the report.

This year, the number of banks that have given in to harassment from the US has increased by 40.

Examples include: Cubana Airlines being informed that it couldn’t open an account in Nicaragua; the Pan-American Health Organisation being unable to transfer money owed to Cuba; and a Belgian bank stopping a transfer between the University of Gent and Cuba’s National Agricultural Science Centre intended to help import a vehicle for a joint project.

In the case of Britain the report provides several cases. In August 2016 Amazon refused to process orders for the Cuban embassy in London as it was considered “a violation of the economic regulations it was supposed to observe.”

British citizens are prevented from travelling to Cuba from the United States with the usual tourist card they would buy to travel from Britain.

Instead the US government requires them to buy more expensive visas from US airlines and makes them apply for an authorised travel licence from the US government, something that should only be applicable to US nationals.

The report also makes reference to the closure of the Cuba Solidarity Campaign’s own bank accounts by the Co-operative Bank, and the letter from the bank’s chief executive Niall Booker confirming that this was due to “risk” arising from sanctions imposed by the US government’s OFAC.

The Open University bar on Cuban students falls out of the timeframe of this year’s UN resolution, but is likely to be in included in the report presented before next year’s vote.

Multiply these few examples hundreds of times around the world and you get a small insight into the difficulties the country faces.

Despite suffering the longest-standing economic sanctions ever imposed against any country, Cuba resists. Its response to the US’s aggressive and interventionist foreign policy is to forge a policy built on solidarity and humanitarianism and show that another world is possible.

In the last few weeks Cuba has sent 40 health specialists to help after the Mexican earthquake; in the midst of its own recovery from Irma, a team of 750 medical professionals went to the aid of other affected Caribbean islands; and the Bolivian minister of health has just released figures announcing 688,000 Bolivians have benefited from eye surgery thanks to Cuban doctors as part of the health programme Operation Miracle.

Such acts are a testament to the Cuban people’s defiance in the face of almost 60 years of aggression and blockade by successive US administrations and an inspiration for campaigners to support the Cuban people in their call to end this cruel and archaic policy.

• The blockade of Cuba will be one of the topics discussed at the Latin America Conference 2017 at Congress House on Saturday December 2 2017. Tickets and the full programme are available at www.latinamerica2017.org.uk or telephone (020) 7490-5715.