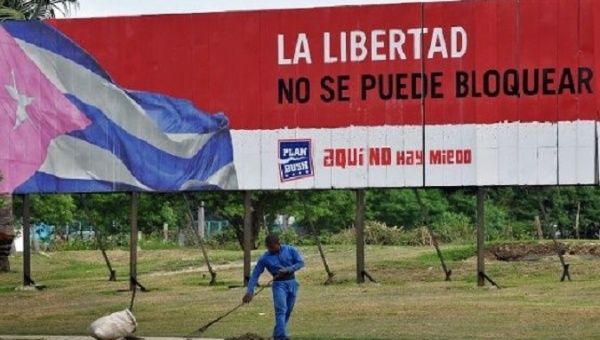 Hashtags such as #NoMasBloqueo, #Niunpasoatras, and #UnblockCuba, are being used to condemn the U.S. blockade against Cuba. | Photo: EFE

Hashtags such as #NoMasBloqueo, #Niunpasoatras, and #UnblockCuba, are being used to condemn the U.S. blockade against Cuba.

“Cuba's only crime is its decision to be a free, sovereign and socialist country just 90 miles from the Empire,” a statement said.

United in an international campaign, people against the U.S. blockade on Cuba are taking part in a Twitter storm a day ahead of the United Nations General Assembly vote on a draft to end the decades-long blockade.

“Along with diplomats, experts in human rights, social movements, religious, trade unionists and activists from all parts of the world, we raise our voices against this obsolete and failed criminal policy that has been applied for more than half a century," said a statement from the International Committee for Peace, Justice and Dignity for the Peoples.

Hashtags such as #NoMasBloqueo, #Niunpasoatras, and #UnblockCuba, have been adopted by organizations and social and human rights activists to condemn the blockade initiated by the United States in 1961.

“The United Nations General Assembly will vote on the resolution presented by Cuba. Once again the entire world will defend the unconditional end of the criminal and inhumane blockade as it has since 1992," the group said.

“The annual vote in the United Nations exposes the great hypocrisy of each U.S. administration while isolating the world's most powerful country from the community of nations around the world,” it added.

“Cuba's only crime is its decision to be a free, sovereign and socialist country just 90 miles from the Empire,” the statement said.

On Monday, China denounced the blockade as spokeswoman Hua Chunying from the Ministry of Foreign Affairs said her government firmly believes the policy only serves to hinder Cuba’s development.

The blockade has caused losses of more than US$130,178 million, according to a report titled, "Cuba vs. Blockade," issued by the Caribbean island.

The U.S. blockade makes it difficult for the Cuban people to access essential items such as food, drugs and medical equipment on the international market.