Che’s Daughter Aleida Calls For Unity Of The Left 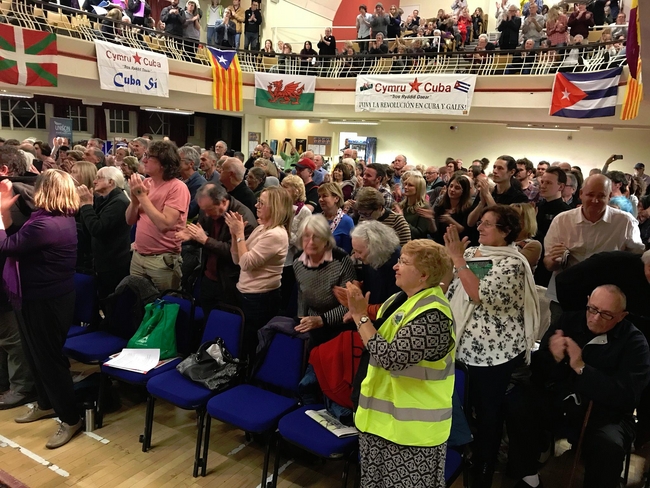 Aleida Guevara 2017 North Wales meeting, Morning Star report: They had travelled to Denbigh Town Hall from as far as the Wirral, Anglesey and Aberystwyth to celebrate the Cuban revolution in music, song and verse and to hear Aleida Guevara talk about her father’s legacy and the current situation in her country. MEIC BIRTWISTLE reports

The banner on the stage of Denbigh Town Hall on Tuesday night was trilingual — Welsh, English and of course Spanish — “Daw Dydd — Our Day Will Come — Venceremos!”

The Cymru-Cuba event being held there was marking three major commemorations. Held on the very day of the 100th anniversary of the Russian Revolution, this year also sees 35 years since the founding of Wales Cuban Solidarity Campaign and it is now 50 years since the CIA-sponsored assassination of revolutionary thinker and leader Che Guevara.

And it was to hear the words of Che’s daughter, Aleida, that brought nearly 400 eager people to the small north Wales town on this November evening. They had travelled from as far as the Wirral, Anglesey and Aberystwyth to celebrate the Cuban revolution in music, song and verse and to hear Aleida Guevara talk about her father’s legacy and the current situation in her country.

Speaking of her work as a Cuban paediatric doctor in many of the world’s most poverty stricken regions — from shanty towns to remote jungle forests — she lamented that “so many people still live in such terrible conditions on this planet.”

She stressed that care and concern — particularly for the most oppressed — was central to the Cuban revolutionary principle, particularly that practised and preached by her father, as both a doctor and socialist.

“The great revolutionary is one who is full of love. It is impossible to think of a real revolution if it does not have that tradition at its heart.”

The hall itself was decked with a myriad of flags — of Catalonia, the Basque Country, Wales, Cuba as well as political and solidarity banners — including that of the Morning Star.

Beneath them Aleida went on to talk of the challenges facing the revolutionary movement.

“US troops are ready to crush any political actions that they regard as being against their own interests and those moves are what we see happening in Venezuela.

“They own great media corporations and many journalists have become repetitive parrots in their service.”

The neoliberal world order was inflicting a new colonialism but one descended from the old version, she declared.

“Who told the First World that they had the divine right to interfere in the problems of the whole world? Who gave them such a right?

“In our struggles for the future we must not forget the past. We need all of your force to accompany us in that struggle. A better world is possible and we will fight for that,” she concluded.

A wide range of cultural talent from the area had been invited to entertain the distinguished guest. The Cor Gobaith choir had travelled up from Aberystwyth to perform a range of songs of solidarity. The Chilean musician Ignacio Rivera sang some of his murdered fellow countryman Victor Jara’s compositions. Nick Blandford and his daughter played new numbers with a classical edge while Eirian Conlan gave a harp recital which included Spanish versions of traditional Welsh folk songs from the Welsh settlement in Patagonia. One of the songs she performed was the classic Welsh hymn Calon Lan — A Pure Heart — echoing that concept of revolutionary love.

Rob Miller, director of the Cuba Solidarity Campaign, spoke of the £60,000 already sent by that organisation to assist Cuba in its reconstruction work after the recent Hurricane Irma. But he also stressed that even in the midst of its own travails the “the Cuban government had dispatched some 770 doctors to help neighbouring islands in the region — a testimony to the people of Cuba. While President Trump had instead extended his blockade of Cuba on the very eve of the hurricane at such a time of need.

Speaking earlier exclusively to the Morning Star, Aleida Guevara explained that although she had visited Britain some five times previously this was her first trip to Wales. Though she was acquainted with the country by reading novels about the perilous lives of the Welsh miners.

She spoke movingly of her work in the health field with young people in Cuba and around the world: “I’m working now particularly with young revolutionaries. There is I feel a massive sense of trust that the successes of the revolution will be renewed. We always have to move on but still remain true to to its principles and so avoid contradictions.”

As to her father Che Guevara’s legacy she stressed: “My dad wrote down everything that he experienced and went through. So he left behind his experiences and records. The big challenge for us is to analyse all of the material left by Che … so we can apply it then to our own situations and life.”

Aleida’s abiding message to this gathering of people of many languages, countries and political parties was: “Without unity we have no strength. It is unacceptable that all these people who call themselves leftists fight among themselves. We are too few for that.”