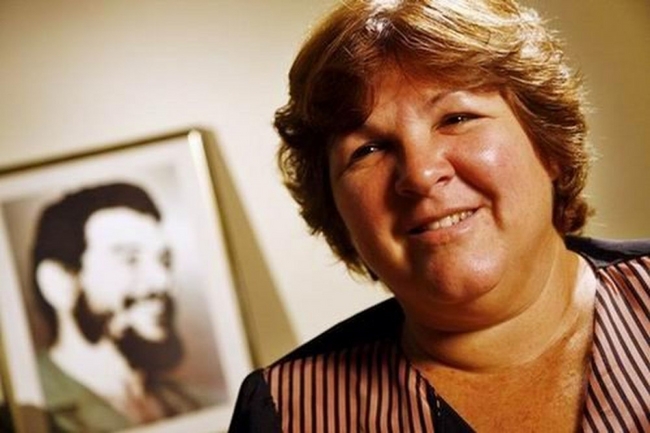 Dr Aleida Guevara March spoke directly to over 3000 people in 7 towns and cities at over 20 different meetings during her 10 day stay in Britain and Ireland.

The tour coincided with the 50th anniversary of the death of her father and revolutionary hero, Ernesto ‘Che’ Guevara, who was executed by the Bolivian army under orders from the CIA in October 1967.

Aleida is a paediatrician working at the William Soler Children’s Hospital in Havana and has spent time working overseas in Cuban medical missions in Nicaragua, Angola, Ecuador and Nicaragua.

“It’s a historic date, very important not only for Cubans but for all of humanity, because it marked the beginning of a new era for the human race. This gave hope to all the other peoples of the world, even of the third world, that we could achieve something.”

She explained how the Soviet Union helped the Cuban Revolution in material terms:

“It was indispensable in the first years to count on that support. Thanks to them we had the first arms to defend our revolution. Cuban students were able to study in Russian universities because of that solidarity, because this revolution existed.”

There was much interest from the media and Aleida was interviewed for the BBC Sunday Politics, the Daily Mirror, Guardian, the Morning Star and numerous Russian and international outlets.

She took the time while in London to visit the Marx memorial library and Karl Marx’s tomb at Highgate cemetery.

The programme in Belfast was packed with meetings and visits including discussions with doctors at the main Royal Victoria Hospital, as well as the Belfast children’s hospital where Aleida was able to see first hand the local provision. Discussions centred around comparisons between the services in Havana and Belfast, although it was clear that the medics had more in common than differences.

The North Wales town of Denbigh has around 6000 inhabitants. Yet over 400 people packed into the town hall to hear Aleida speak. It was the biggest meeting in the area for years.

The banner over the stage was trilingual — Welsh, English and Spanish — “Daw Dydd — Our Day Will Come — Venceremos!” The wonderful evening organised by Cymru-Cuba celebrated the Cuban revolution in music, song and verse. Speaking of her work as a Cuban paediatric doctor in many of the world’s poorest regions, Aleida lamented that “so many people still live in such terrible conditions on this planet.”

She reminded people of one of Che’s most famous sayings:

“The great revolutionary is one who is full of love. It is impossible to think of a real revolution if it does not have that tradition at its heart.”

“US troops are ready to crush any political actions that they regard as being against their own interests and those moves are what we see happening in Venezuela.

“Who told the First World that they had the divine right to interfere in the problems of the whole world? Who gave them such a right?” she said.

Rob Miller, director of the Cuba Solidarity Campaign, spoke of the £60,000 already raised by CSC to assist Cuba in its reconstruction work after the recent Hurricane Irma. But he also stressed that even in the midst of its own travails the “the Cuban government had dispatched some 770 doctors to help neighbouring islands in the region — a testimony to the people of Cuba.”

A wide range of wonderful cultural talent from the area entertained the audience through the evening including the Cor Gobaith choir, the Chilean musician Ignacio Rivera, Nick Blandford and his daughter, while Eirian Conlan gave a beautiful harp recital which included Spanish versions of traditional Welsh folk songs from the Welsh settlement in Patagonia. One of the songs she performed was the classic Welsh hymn Calon Lan — A Pure Heart — echoing that concept of revolutionary love.

In Manchester, Aleida addressed a huge standing-room only crowd at the Mechanics Institute which is known as the birthplace of the British TUC. Dr Guevara said that contrary to what many thought, Barack Obama had done little to change relations between the US and Cuba:

“Yes, embassies have opened in Havana and Washington, but relations are not normalised. How can you normalise relations when the US continues to illegally occupy part of your territory with a military base and prison in Guantanamo? How can relations be normal when the US punishes organisations seeking trade with Cuba?”

Aleida urged her British audience to defend their NHS: “You need to be strong and defend what you have against rampant privatisation.”

Aleida also visited the Working Class Movement Library where she saw many historical artefacts illustrating the long history of solidarity between Britain and Cuba.

In Sheffield Aleida addressed a large number of students at the university many of whom were international students from Latin America, Africa and Asia. She took time to pose for photos and sign numerous posters and books. In the evening Sheffield CSC organised a large public meeting which was full to capacity.

One of the most important meetings was with the Royal College of Paediatricians where Aleida was able to discuss and share experiences with the President and the Executive as well as with around 100 paediatricians from across the country. It was clear that Cuba’s provision of universal and free health care to all its citizens was something that many in the audience were determined to defend here. Aleida spoke to over 200 people at the University College London where she spoke movingly of her father, Cuba’s internationalism and the ongoing struggle against the blockade.

Rob Miller, CSC Director, was able to share the news of the victory over the discriminatory actions of the Open University against Cuban students which was greeted with applause and cheers. In Glasgow Aleida addressed a huge crowd at the Scottish TUC. She also met with the Lord Provost and spoke at a number of events as part of the Havana-Glasgow Film Festival.

At a farewell dinner Aleida was presented with some gifts from the Cuba Solidarity Campaign. She expressed her satisfaction with the visit which had been both exhausting but rewarding.

Throughout her visit Aleida spoke of the bridge of solidarity between our people and countries, reminding us that

“Solidarity is always a two-way process of giving and sharing. The blockade hurts Cuba most, but it also hurts the world.”

The Che Guevara Anniversary Tour will help bring new people to our work of solidarity with this small Caribbean island, whose people deserve our friendship and support in the struggle against the ongoing US Blockade and for dignity and self-determination free from external interference and aggression.

Our huge thanks to everyone who helped coordinate this programme, hosted Aleida’s visits and supported all the events and activities.

Photos from the tour are on the CSC Flickr page here

An audio recording of the UCL meeting is available here