The blockade hurts Cuba most, but it also hurts the world: Aleida Guevara in Manchester 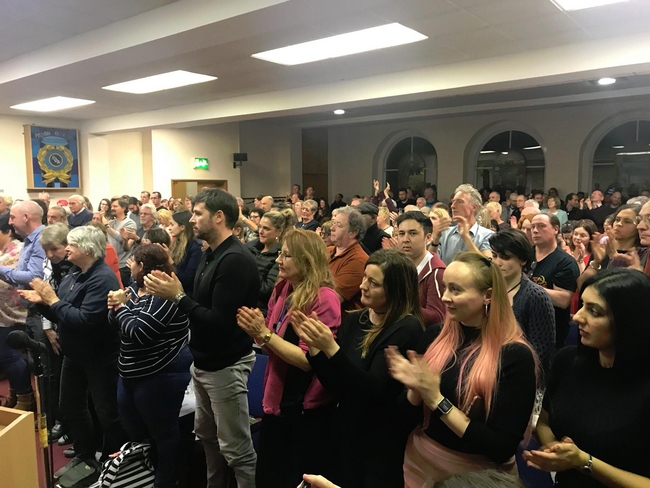 For the woman cradled as a baby in the arms of the inspirational ‘Che’ where could be more fitting for her to speak than in the building where the British TUC was born? As a living and lasting legacy of her father’s belief that a better world is possible, Doctor Aleida Guevara, Cuban paediatrician, daughter of Ernesto ‘Che’ Guevara, held the two hundred-strong audience in the palm of her hand in the Manchester Mechanics Institute, and passionately conveyed in an hour what Cubans have achieved in fifty-five years through commitment and courage.

Tackling first the elephant in the room, the United States Blockade, Doctor Guevara told us that contrary to what many think, Barack Obama did little to change relations between the US and Cuba: ‘Yes, embassies have opened in Havana and Washington, but relations are not normalised. How can you normalise relations when the US continues to illegally occupy part of your territory with a military base and prison in Guantanamo? How can relations be normal when the US punishes organisations seeking trade with Cuba? Or when the US rewards Cubans for leaving Cuba? Or when they have an annual budget of 50 million dollars aimed at causing internal disruption to Cuba?’

Despite the cost to Cuba’s economy caused by the US Blockade, the country spends over half its budget health and education. ‘In Cuba, doctors are the children of workers and farm labourers.’

The inseparable gifts to progress of health and education are shared beyond the tiny Caribbean island. ALBA, (Bolivarian Alliance for the Peoples of Our America), initiated by Hugo Chavez and Fidel Castro in 2004, has given hope, strength and practical support to Cuba, repaid with educational and health programmes. For instance, the Cuban literacy campaign, ‘Yes I can’ (Yo si puedo) which initially gave the skills of reading and writing to thousands of Venezuelans, later extended to other Latin American countries and world-wide. It began with the colonial languages of Spanish, English, French and Portuguese and extended to mother tongues such as Quechua and Mapuche. However, for older people learning to read and write for the first time in their lives, their reluctance to participate, it was noticed, was due to failing eyesight.

‘Cuban doctors carried out operations to remove cataracts. When patients removed the bandages and could see again they said, “It is a miracle!” Thus, Operation Miracle was born. Thousands of people living in countries where health care has to be paid for had regained their sight. Private doctors accused Cubans of taking away their clients,’ Aleida said, ‘but this wasn’t true. Cuban doctors do not have clients; they have patients.’

The generosity of Cuban medical brigades is illustrated by the support given during the Ebola crisis in countries such as Liberia and recognised by the World Health Organisation. ‘If the WHO wants to see examples of best medical practice, they come to Cuba,’ Doctor Guevara said. She also told us that the man who had killed her father had been treated by Cuban doctors to remove cataracts in his eyes. Such is the forgiveness and generosity of Cubans.

On a lighter note, Doctor Guevara joked, ‘Cubans die of the same diseases as people in rich countries,’ reminding us with macabre humour that excellent health care presents new challenges.

Aleida urged her British audience to defend our own health service: ‘The best in the world. You need to be strong and defend what you have against rampant privatisation.’ She spoke of a bridge of solidarity between our people and countries, reminding us that solidarity is always a two-way process of giving and sharing. The Blockade hurts Cuba most, but it also hurts the world; so many of their medical achievements could benefit us too.

Sadly, Operation Miracle cannot remove the scales from the collective eyes of the United States government who fail to see the wasteful futility of the Blockade. Removing the Blockade remains our mission in our continued solidarity with the people of Cuba.