Aleida Guevara on Cuba, Trump and her revolutionary father 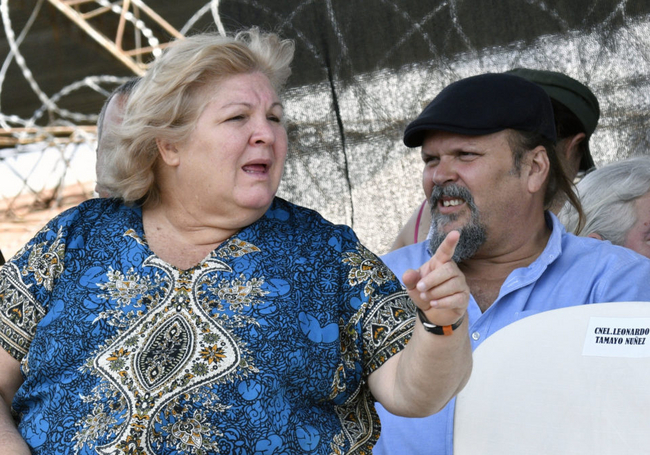 The daughter of Che Guevara is a firm believer in the Cuba her father helped to create, and believes it’s time the US lifted its embargo on the Caribbean nation. She spoke to David Walsh during a UK speaking tour

The spirit of Che Guevara lives on, and is sizing me up from the across the table. His intense gaze is emanating not from a ubiquitous t-shirt or poster, but from the unwavering brown eyes of his daughter, Aleida Guevara March.

Her face is astonishingly like her father’s, and while softly spoken, she summons his revolutionary verve when addressing a crowd. Sitting in the crumbling STUC building in Glasgow’s West End drinking sweet black tea – perhaps to boost her flagging energy – Guevara, 56, looks like she is beginning to feel the strain following a year of events commemorating her father’s assassination 50 years ago.

Second in command to Fidel Castro in the 1959 Cuban revolution, Ernesto “Che” Guevara had fallen out of favour in Havana when he left to try to lead armed revolutions in the Congo and then Bolivia. Failure in the latter resulted in his capture and summary execution by CIA-backed government forces on 10 October, 1967.

Aleida Guevara March was just shy of her seventh birthday when her father was killed.

Now, 50 years on, she has just finished one of the last stops on a UK-wide tour of speaking engagements organised by the Cuba Solidarity Campaign to mark the anniversary.

Her message is simple: end the blockade, for Cuba’s sake as much as ours. “Cubans are a very hospitable people. Very brave. They have been fighting for more than 100 years for their independence, and got it in the end,” she tells me. “For that reason, the independence we have, we’ll defend it with every fibre of our being.”

Conquered first by the Spanish, Cuba passed hands as a colony three times before formally gaining its independence in 1902. Since then, the island has struggled to break free from the orbit of American influence. After the toppling of the US-backed dictator Fulgencio Batista by Castro and Guevara, it was to become one of the most volatile theatres of the Cold War.

This entanglement with the US has been a double-edged sword for post-revolution Cuba, not least because a US-imposed blockade has crippled the island’s economy. It has also steeled the Cubans’ resolve to make their isolated country a success.

“If you compare Cuba to the rest of the so-called first world, you probably couldn’t live there,” she continues.

“But if you look at the third world, and then you look at Cuba, you’ll see we have achieved very many things.”

Despite grinding poverty, the country enjoys exceptionally high levels of literacy through its free education system, including tertiary education for those who want to do further studies, and a universal healthcare system originally inspired by the creation of Britain’s NHS.

The Caribbean island is also at the cutting edge of medical science, something that as a doctor (following in the footsteps of her father) Aleida Guevara March is immensely proud of. Conversely, the UK is missing out on this lifesaving knowledge.

Cuban scientists already have vaccinations in production – and available for export – against cancers of the prostate and lung. They are also in the final stages of human clinical trials for medications for breast and womb cancer.

“In the next 30 years, Cuba could end up becoming one of the most important scientific centres on the planet. We produce a lot of new medicines, including preventative vaccinations.

“Unfortunately, because of the laws surrounding the blockade, you can’t access them.”

The only drug to make it out of Cuba for use worldwide is a vaccine for Meningitis B – because it is one of the only ones that exists. It is one of the many things the islanders are trying to get people to understand about the blockade – that Cuba is waiting to make a contribution to the world.

“The important thing for us is, for the first time, the world respects us as a people. We’re possibly the only country in the world today which says no to the United States government and will keep saying no, whatever the consequences.

“And we’ll never give in. For that reason, I have great respect for my people.”

Despite a much-lauded thaw in US-Cuban relations in the last years of the Obama administration, much of what was achieved then has been hastily diminished by his successor.

Unlike the incumbent who makes foreign policy decisions on the hoof on Twitter, does she think being intelligent enough to be sensitive to the impact of US foreign policy in the Caribbean is the greater sin for Obama?

"I think that Obama never told lies. He is a Capitalist and he thinks like that. But because he was more intelligent, he realised that the politics that the United States employs against Cuba is absurd.

“I’m not saying Trump is stupid, because he’s a multi-millionaire. He must have been able to steal with both hands to have amassed his fortune.

“But in terms of relationships with other people, he is a complete and utter cretin. That’s definitely the case.”

And if Trump wins a second term? She grimaces in exasperation, as she draws a hand up to her cheek and repeats like a prayer: “I hope not!” “Not for us [Cubans],” she clarifies. “For the people of the United States.

“To us, it’s all the same. We’re used to that type of President of the United States. It’s not only Trump but he’s perhaps the most histrionic of them all.”

Aleida’s obvious disdain for Cuba’s northern neighbour appears to only extend as far as the governing political elites of America, particularly the occupant of the White House. There are many Americans, she says, who are sympathetic to Cuba and the devastating impact of the realpolitik imposed on the island since the revolution.

Travelling across the globe to rally solidarity for Cuba in a landmark year like this one, she is perhaps hoping to alert new generations to an old struggle, and moreover, the beliefs of her father that she says still resonate today.

“They are extraordinarily relevant. If you read his writing ‘Create Two, Three, Many Vietnams’, it has a tricontinental message. Every time he talks of Vietnam, substitute the word Vietnam for Iraq or Syria, and it’s exactly what’s happening today.”

To her, he will always be ‘Papi’, first and last. But to the rest of the world, the bedraggled, cigar-toting guerrilla has become an icon; as a potent symbol in popular culture as much for his ideals.

Being the eldest child from his second marriage, does she ever feel a burden of responsibility to perpetuate Che’s legacy? Those piercing eyes fix on me again before answering.

“I am a revolutionary woman. I belong to the Cuban Communist Party and I am convinced of what I do, so when I talk about my father, I do it with great pleasure. “If I can help young people to get to know him and what he stood for, I’m glad to do it.”

A telling smile breaks on her fatigued face and her brown eyes melt. “I share his ideals. They are mine as well.”