This is How Cubans Run, Campaign and Vote in Elections 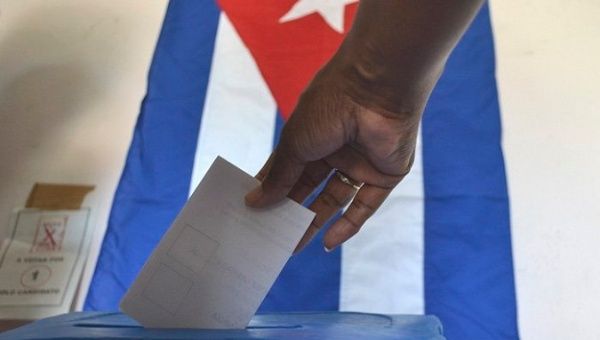 The Cuban electoral process doesn't allow discriminatory, offensive, defamatory and demeaning political campaigning and no political, social or financial organisation can pay for any campaign.

Cuba is holding another election, this one for citizens to choose representatives from municipalities from over 27,000 candidates who will be competing for 605 People's Power Assembly seats.

This will be the first round of votes, the second round is on Nov. 29, and there will be a runoff election if any of the candidates don’t get a majority of votes on Dec. 3.

Over 60,800 candidate nominations were put forward by municipal councils across the country between Sept. 4 and Oct. 30, for the 168 municipal assemblies throughout the country.

The election timeline had to be modified for this year’s municipal assembly elections due to Hurricane Irma, which hit the island in early September.

Who can be a candidate?

The aspiring delegates are nominated freely by people from the municipality and elected by direct vote in each assembly, where people decide who they consider to have the qualities to best represent them.

The island's National Electoral Commission announced that 78 percent of residents participated in the selection process, about 6,746,867 voters.

According to the president of the CEN Alina Balseiro, 27,221 people fulfilled all the requirements to become candidates. Since Nov. 1, their names and biographical information were presented openly for all citizens to see.

Candidates for each municipal assembly, which together make up the National People’s Power Assembly, need to be residents from those particular municipalities.

The CEN local commissions are in charge of carrying out any activity in favor of the candidacies in Cuba. They assure that the process has a deeply ethical, civic and educational content.

They also explain the importance and the right of exercising the vote, the capacity of each person to do so, the merits for candidates, and the ethical, moral and values that must be present.

In addition, the campaign will be free of any preference over one candidate or another.

The Cuban people are in charge of proposing, choosing and promoting the candidates, through public assemblies in a sovereign process.

All the expenses needed to run the elections are provided by the national state budget, and therefore no candidate has the need to raise money or contribute their own money to the campaign.

No political, social or financial organisation can pay for any campaign.

Once the application process ends for each aspiring candidate, the commissions are in charge of publishing names, photos, biographical information and projects for all candidates in the electoral districts in which they were elected, which numbers at least 3,000.

This includes merits, capacities, and personal conditions to occupy the seat and take on the responsibilities as a delegate.

Before voting, they must find which electoral commission they are subscribed in for their polling place, and its location in order to comply with their right to vote.

They must verify if they are enrolled in the voter list since in Cuba they don't need to register in order to vote. It is a universal right for everyone. If they're not on the list they can ask for their names and identity card to be listed immediately, in order to vote.

To vote, they must present their national identification document, be over 16 years old, and a permanent resident on the island for a period no less than two years before the elections

Only judicial or mental health issues, proven by a court, would be a reason to not be able to vote.

If any person is ill or is not physically able to vote, they will be aided by another person chosen by the voter, as long as it's not a candidate on the ballot or a member of the voting centre which will be helping other voters.

The blank card will be given folded and the voter will be helped to reach the cubicles to vote. If the person makes a mistake while voting, he or she has the right to ask for a new ballot after destroying the previous one.

The members of the centres need to show each elector if needed, how to cast a vote in case of they do not know. Voters will sign that they have cast their ballot after voting as a record.

If they are unable to reach the voting centres due to a physical illness, they can vote from home or another convenient place, and a member of the polling station is assigned to take the ballot to the citizen.

Before the vote, the voters and any other person who would like to, including observers, can visually verify that the ballot boxes are empty before being sealed for the opening of the vote, and also once the vote counting is over.

After all ballots are cast, the votes are counted in public.