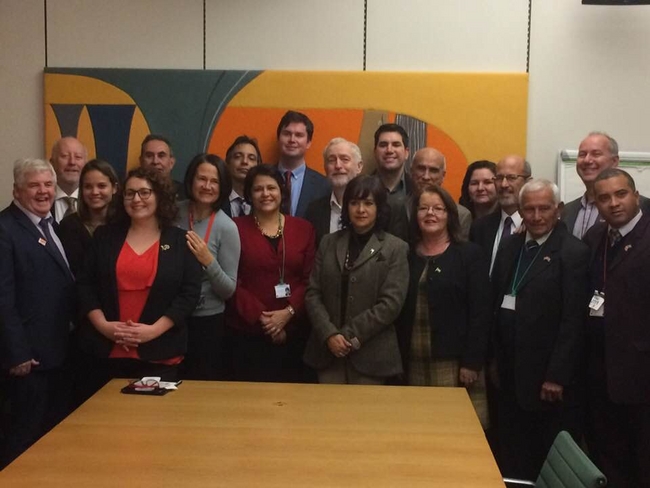 The six visiting MPs came from diverse professional backgrounds, including Maria Rubio, a qualified doctor and specialist in the prevention of breast cancer; Pablo Marichal, a founder of Cuba’s Christian Student Movement; and other delegation members included a marine biologist, a journalist, and a lecturer in international relations.

As part of their official visit at the invitation of the IPU, they met with high level British politicians including Alan Duncan MP, Foreign Office Minister, John McDonnell MP, Shadow Chancellor and Baroness Hooper, Chair of the Latin America APPG. They also met with local government representatives during visits to Reading and Oxford.

Cuba Solidarity Campaign, working closely with Karen Lee MP, chair of the All Party Parliamentary Group (APPG) on Cuba, organised special parliamentary meeting during their visit for them to meet with MPs and Peers.

An unprecedented number of MPs, Peers, academics and trade unionists queued up to meet with the Cuban delegation.

Jeremy Corbyn, Leader of the Labour Party, was among those to attend, alongside other frontbench MPs including Angela Rayner, Shadow Education Minister, Andy McDonald, Shadow Transport Minister and other Shadow Ministers including Barry Gardiner, Dawn Butler, Richard Burgon and Ian Lavery.

Jeremy Corbyn welcomed the Cuban guests and paid tribute to the re-establishment of diplomatic relations with the United States and the normalisation process:

“The resolution of the Cuban people, which eventually led to an agreement with United States on recognition, was a very important thing, as was the freedom of the Miami Five – which helped pave the way for that - and I hope the Trump administration doesn’t go backwards on this,” the Leader of the Labour Party said.

Corbyn also praised Cuba’s “very impressive” hurricane relief efforts and their support for neighbouring countries in the region also affected after “the worst year of hurricanes for a very long time”, he said.

On the evening of 28 November the Cuban MPs took part in a packed public meeting organised by CSC in Portcullis House, with Karen Lee MP chairing and contributions from academic Lauren Collins and Rob Miller, CSC Director.

Santiago Lajes, leader of the delegation said: “Now is a very important time in Cuba, with the general election process well under way – and we will have new president in February next year.

“The next president will be an elected MP, elected to serve their constituents. I have to say this, as the commentary throughout the world often ignores this fact.”

Gretchen Gomez, aged 26, one of the youngest parliamentarians in Cuba, thanked British academic Lauren Collins, who outlined the participatory system that Cuba has at the meeting.

“Why is it important to explain the particular aspects of the Cuban electoral system?” Gomez said, “Because it then becomes clear that participation is the basis of our system”

“Many MPs in Cuba are women; many are young. I began my journey to becoming an MP when I was nominated to represent students - that's how I found myself as 23 year old [three years ago] sitting by some MPs who have fought their whole lives fighting for our revolution”, Gomez added.

Maria Rubio, a Doctor and National Assembly member spoke about how the US blockade impacts the lives of the Cuban people:

“We have many examples where we haven't been able to obtain medicines, food, many basics that our people need.

“It does affect us hugely. But it has also taught us that our people can live without the United States. It's made us stronger.

“This powerful neighbour to our north could save so many Cuban lives by ending the blockade”, she added.

CSC Director Rob Miller thanked the British MPs and the public for their steadfast campaigning work which has recently forced the Open University to overturn its ban on Cuban students:

“The discrimintarory Open University ban of Cuban students should never have happened in the first place,” he said.

“But the blockade continues. It’s the extraterritorial nature of the blockade that also led to CSC having our bank accounts closed by the Co-operative Bank - a British organisation having its account closed by a British bank due to US blockade legislation. It’s an affront on our sovereignty as well as an attack on the Cuban people”, Rob Miller said.

The public meeting was attended by over 70 members of the public and also attended by MPs including Chris Williamson, Clive Lewis and Emma Dent Coad.

Writing on Twitter, Shadow Minister Chris Williamson said: “Inspirational wide-ranging speeches by Cuban MPs tonight speaking on various topics from the outrageous US blockade of Cuba to control and ownership of media in US and UK. Meeting chaired by the excellent Karen Lee”.