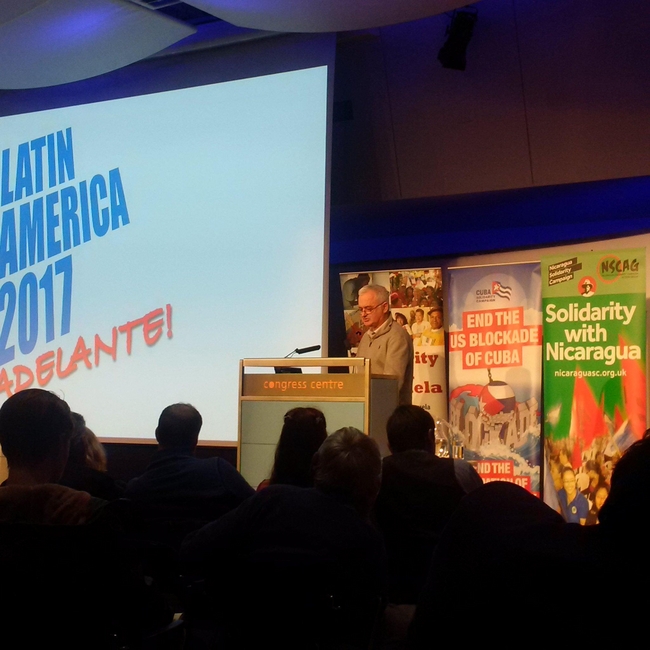 A JEREMY CORBYN government would have an independent foreign policy and “restore Britain’s standing in the world,” those gathered for the Latin America Conference heard yesterday.

The Labour leader addressed the conference by videolink, praising participants for their work for “justice, peace and democracy” across the Atlantic.

Unite chief of staff Andrew Murray said distancing our foreign policy from that of the US was more important than ever in the era of Donald Trump.

Before the US president’s election we knew he was a “vulgar, ignorant and mendacious braggart,” Mr Murray noted, but now it was clear that he also had “the outlook, temperament and prejudices of a fascist.”

He called for a mobilisation to stop the president’s projected visit to our shores, saying that if Mr Trump did show up “our record for holding the biggest ever demonstration [against the Iraq war in 2003] has been held long enough. Let’s get even more people on the streets.”

Former MP George Galloway said US aggression towards Venezuela was because Washington “doesn’t want any Latin American country governed in the interests of its own people.

But he added that Britain’s rulers had “great affection” for Latin America — “after all they keep their money there, as we saw from the Panama and Paradise papers.”

With England drawn to play Panama in Group G at next year’s football World Cup, Mr Galloway wondered “which team will David Cameron be supporting?” to laughter from the crowd.

Labour MP Chris Williamson said that Mr Corbyn by contrast had always “stood up for progressive movements in Latin America — let’s hope it’s not too long before he does that from the steps of Downing Street.”

Mr Murray agreed, saying nations such as Cuba and Venezuela which had defied an unjust world order had always needed solidarity from progressives around the world.

Only when a Corbyn government’s commitment to peace and justice created the need for Hands Off Britain movements abroad will we have “repaid our debt to the heroic people of Latin America,” he declared.