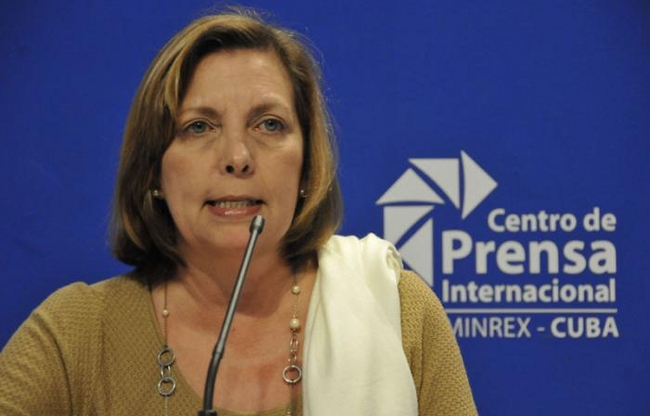 The Cuban delegation to migration talks with the United States, expressed its deep concern over the impact of measures on relations between the two countries

A new round of migration talks between Cuban and U.S. delegations was held December 11, 2017, in Washington, presided by Director General for the United States at the Cuban Foreign Ministry, Josefina Vidal Ferreiro, and U.S. Deputy Assistant Secretary of State for the Western Hemisphere, John Creamer, respectively.

The Cuban delegation expressed its deep concern over the negative impact unilateral, unfounded, and politically motivated measures taken by the U.S. government in September and October, 2017, have had on migration relations between the two countries.

The group reiterated the negative impact of the U.S. government’s decision to suspend visa services at its embassy in Havana, creating serious obstacles for families on both sides of the Florida Straits, and all kinds of exchanges between the two peoples.

The island’s delegation also reaffirmed its condemnation of the arbitrary expulsion of a group of important officials from the Cuban Embassy in Washington, which has severely affected the work of the island’s diplomatic mission, above all the Consulate and the services it provides Cubans residing in the U.S., as well as U.S. citizens wanting to visit the island.

The representation also highlighted the harmful effect canceling visits by official delegations from the U.S. to Cuba is having on migration cooperation, above all pre-arranged visits of mutual interest, noting that if the situation continues it could jeopardize exchanges in this and other sectors.

Regarding present migration agreements, the Cuban delegation urged the U.S. government to fulfill its obligation to issue no less than 20,000 immigration visas a year to Cuban citizens. The group also reiterated its concern over the continued enforcement of the Cuban Adjustment Act, which encourages irregular migration, noting that the elimination of this regulation will be vital to establishing normal migratory relations between the two countries.

Meanwhile, both parties agreed on the positive impact of the Joint Declaration on Migration signed on January 12, 2017, and specifically, the elimination of the “wet-foot-dry-foot” policy and Parole Program for Cuban Medical Professionals, to reducing irregular immigration from Cuba to the U.S.
They also agreed on the usefulness of exchanges between border patrol and coastguard services, held in July this year and the technical meeting on trafficking in persons and migration fraud which took place in September, with another scheduled December 12.