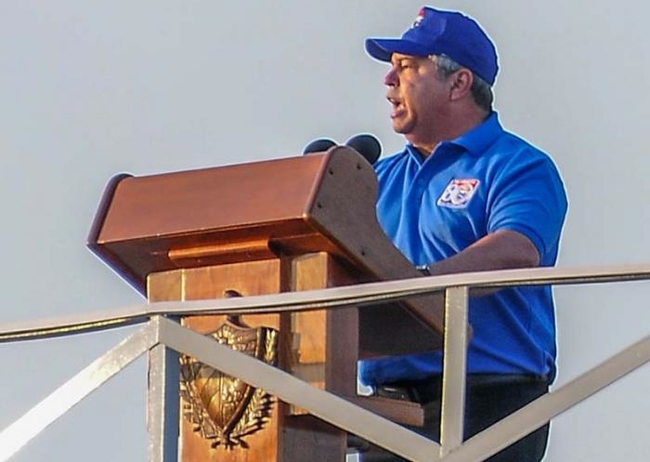 Compañero Miguel Díaz Canel-Bermúdez, president of the Councils of State and Ministers,

At this historic time for the homeland, millions of Cubans across the country are leading another massive and popular national mobilisation to celebrate International workers’ Day, under the maxim: Unity, Commitment and Victory, as an organic process is being undertaken from within trade unions in the lead up to the 21st Congress of the Cuban Workers’ Federation which will concluded next year when we commemorate the 80th anniversary of its founding.

We have many reasons and motives to make this May Day another day to show our support for our Revolution, First Party Secretary compañero Raúl, and his continued leadership within the state and government, presided by compañero Díaz Canel. It is also a place to pay tribute to its (the Revolution’s) historic leader Fidel Castro Ruz and reaffirm our unwavering commitment to the concept of Revolution he left us.

Today, we come together to commemorate transcendental occasions, an expression of the historic legacy of struggle that makes us proud to be Cubans and glorifies the history of our homeland, such as the 165th anniversary of the birth of National Hero José Martí, 150 years since the start of the Independence Wars, the 65th anniversary of the attacks on the Moncada and Carlos Manuel de Céspedes garrisons, and 60 years since the triumph of the Revolution.

At the same time the images of outstanding leaders of our workers’ movement that we carry today in this multitudinous parade - like Lázaro Peña, Jesús Menéndez, José María Pérez, Aracelio Iglesias, as well as others closely linked to trade unions struggles – are testament to our recognition and enteral gratitude for their example of loyalty and commitment.

Similarly, from the compact and colorful parades in squares across the country our demand for an end to the genocidal economic, commercial and financial blockade imposed on Cuba and currently being tightened, will multiply; the people will raise their voice to demand the return of the territory illegally occupied by the Naval Base in Guantánamo, and denounce the aggressive and interventionist actions of the government of the United States.

The strategic battle in the economic-productive sphere, waged by enterprises, subsidised entities and non-state forms of management, in the midst of current difficulties, requires, like never before, the contribution of workers toward continually improving and diversifying physical production, increasing exports, substituting imports, raising the quality of services, as well as the efficient implementation of investment processes linked to national development programs.

In order to achieve these aims we are fully aware of the responsibility of the working class toward generating the wealth our country requires to meet its needs, preserve its social achievements and becoming the key to increasing the real wages of workers and pensioners.

On a day like today, it’s impossible to forget that we live in a world marked by an unjust, unequal and exclusionary international economic order, where the offensive by imperialism and its neo-liberal policies continue to impact the working world.

Labour reforms, recently applied in several countries, have done away with collective negotiation agreements, contribute to the growth of poverty and precarious contracts, while large waves of migrants lack the most basic labor rights, as unemployment continues to rise, above all among the youth and women, and the media wages campaigns to delegitimise the class role of trade unions.

Cuba and its trade union movement reaffirms its unwavering commitment and staunch solidarity with the peoples of the world struggling for their sovereignty and independence, and who make their own, the cause of the humble to build, from within diversity, a great homeland based on cooperation, political consensus and integration.

Undeniable proof of such was the Summit of the Peoples and forums organised by the OAS in Peru, where over 170 legitimate representatives of Cuban civil-society, many of whom were young people, denounced intervention in the internal affairs of all countries and stood out for their arguments and the conviction with which they defended them before mercenaries and stateless persons.

That is why, with the right afforded us by our revolutionary efforts, from this historic square we reaffirm our unconditional support for the Bolivarian Revolution and its President compañero Nicolás Maduro Moros, who is committed to defending the dignity of the homeland of Bolívar and legacy of Hugo Chávez Frías.

We also express the full solidarity of the trade union movement and Cuban people with Nicaragua, the Sandinista National Liberation Front, and government led by Comandante Daniel Ortega Saavedra and Vice President Rosario Murillo Zambrana; as well as our support and eternal solidarity with compañero Luis Ignacio Lula Da Silva and the struggles of the people of Brazil.

It gives us great pleasure to welcome, in this act, compañeros and friends from different trade union organisations, solidarity groups and social movements who are reaffirming, with their presence, their unconditional support for our struggle for a better world.

International Workers’ Day is a resounding demonstration of the solid foundations of our glorious revolution, of the majority support of workers and the people for the updating of our socio-economic model.

Onward compatriots, nothing or no one will stop us.

Long live workers of Cuba and the world!