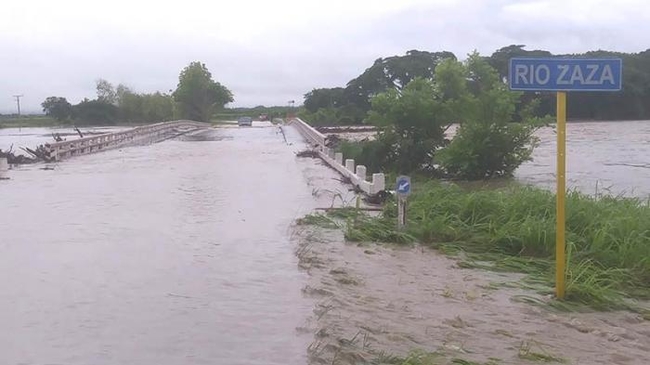 Over the last week, intense rains from subtropical storm Alberto have saturated the soil while dams in the central zone of the country are close to overflowing.

This situation has killed at least four people and more than 51,000 people have been evacuated in the central provinces of Cienfuegos, Villa Clara, Sancti Spiritus and Ciego de Avila.

Official figures also warn of damage to more than 1,000 homes as well as key infrastructure and roads, leading to several towns being cut off.

Damages have been substantial in the agricultural sector, with crops such as rice, beans, tobacco and bananas being particularly affected.

"Hurricane Irma last year left a favourable situation in dams and reservoirs in terms of accumulated water. But these rains have transformed the landscape and the concern is how much damage this will cause," Gloria Perez, a Havana resident, told Xinhua.

The senior citizen said Cuba is undergoing the consequences of climate change with its drastic changes, with the people suffering.

According to local media reports, more than 100 reservoirs throughout the island are saturated and have opened their floodgates, releasing water to the ocean.

The Zaza dam, the largest in Cuba, has accumulated over 1 billion cubic meters of water. It is currently at 103 percent of its full capacity and its six floodgates have been opened.

The floods have also halted operations at Cuba's main oil refinery in the southern province of Cienfuegos and caused a localized oil spill in the local bay.

Jose Marin, a bus driver in Havana, said that while the government is allocating funds to attend to immediate emergencies, the full economic impact will be felt in the coming weeks and months.

"Inevitably, it is going to affect our lives. What worries me the most is the amount of lost crops which will lead to shortages and rising prices for vegetables and fruit," he said.

Lizandra Flores, an elementary school teacher, highlighted that despite an improvement in weather conditions on Wednesday, the heavy rains and floods of the last few days represent "new difficulties" for Cubans.

"Today the sun came out in Havana after almost a week, we are not accustomed to so much rain in Cuba," she said.

On Tuesday, Cuban President Miguel Diaz-Canel met with his cabinet and officials from the affected territories to try and speed up recovery efforts.

Around 58,000 people remain without electricity and dozens of communities are flooded and without communication.

For Ines Chapman, president of the country's hydraulic resources institute, the dams are of particularly pressing concern.

The latest information from the island's weather service indicates that rainfall would decrease on Wednesday, allowing authorities to speed up recovery efforts.

Alberto, which passed through the Gulf of Mexico to hit Florida and beyond, claimed the lives of two journalists on duty in North Carolina on Monday, local media reported.