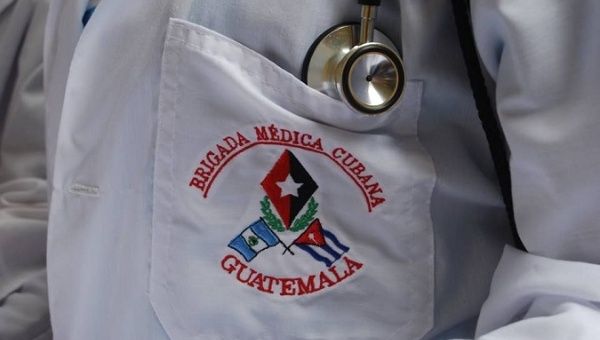 The Cuban Medical Brigade has been working day and night to help Guatemalan medical teams struggling to handle the tragic event.

Since the first moments of the eruption of the Fuego Volcano, the Cuban Medical Brigade (BMC) in Guatemala has been working day and night to help people who are struggling with the tragedy, Cuban and Guatemalan media have reported.

The brigade arrived in the Central American country 20 years ago and have been involved with local communities since then, meeting the people and learning about their different cultures and customs.

Since the tragedy, the Cuban doctors have been visiting the “Jose Marti” school in Escuintla, now turned into a shelter for one of the regions most affected by the eruption, to take over 12-hour night shifts while other local and foreign doctors and volunteers are out resting.

And after their long nights at the shelter, they still go the Escuintla hospital to work their regular shifts.

Several families from El Rodeo, one of the most affected villages by the eruption, are sleeping on mats at the school, adapted to assist about 900 people in need. The doctors visit the rooms, attending to patients and victims of the natural disaster.

The Cuban government put the whole brigade, spread around the country's 22 departments, at Guatemala's disposition during the tragedy to assist the 26-member delegation designated for Escuintla.

Relmar Quintana Martínez, who coordinates the brigade, says that overcrowding and lack of proper ventilation and health services foster respiratory and digestive infections. “We're checking on everyone in order to control the situation and act quickly in case of any emergency,” says Quintana. “As you can see, there's a high population of children and elders, who are always the most vulnerable to respiratory and gastrointestinal diseases.”

“Our doctors are in several centers of the department carrying out active consultations to know how many families there are, what diseases they have, and to take preventive actions,” he added.

Fiama Roxana Dardoy, a Guatemalan social worker, told Prensa Latina that the Cuban doctors have been particularly useful since they had to shelter about 200 families from El Rodeo, La Reyna, La Trinidad and Sabana Grande, some of the most affected communities.

“We are very thankful, they've been taking care of children, women, and elders day and night and always with a very humane, charitable and patient attention,” said Dardoy.

In the Casa Sola gym near the school, also turned into use as a shelter, the brigade and local doctors have been classifying donated medicines and attending to patients and displaced people.

Yuri Batista, the national coordinator of the BMC, says there are 431 brigade members with different specializations working in 16 departments in Guatemala. Among them are 245 doctors, 136 nurses, and other personnel. Some of them are already in their second or third medical mission.

On Sunday, the Guatemalan Health Minister Carlos Soto asked the Cuban State Mission in Guatemala for the possibility of bringing more doctors to take care of the people of Escuintla. The Cuban ambassador Carlos de Cespedes Piedra, on his part, reaffirmed the disposition of the brigade to assist the Guatemalan people.

“The honor of a whole people is in every Cuban health assistant bravely resisting a genocidal blockade from the U.S. The words of Marti are in every Cuban along with the thought that Fidel taught us generously: 'All the glory in the world fits in a corn kernel.' Our glory today is to serve the people of Guatemala and we will be there to the end,” said de Cespedes.

After the eruption, the Cuban ambassador expressed his condolences to Guatemalan President Jimmy Morales and offered the services of the brigade.

The brigade first arrived in Guatemala on Nov. 5, 1998, to assist those affected by Hurricane Mitch. They have carried out 409,166 surgeries and 43,748,222 consultations since then.