Family medicine in Cuba, an achievement of the Revolution 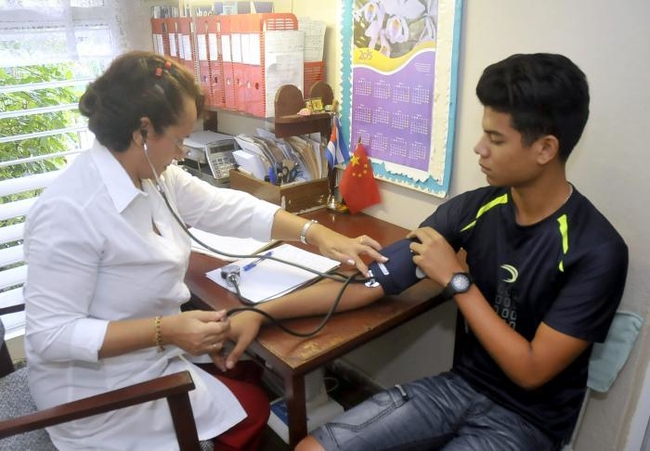 The family medicine program provides healthcare for all age groups

Cuba’s goal to provide medical care to its entire population was the premise that sustained the basic health program established at the community level during the early years of the Revolution. As a result of the continued commitment to this policy, in 2017, a total of 83,534,085 consultations were offered in the 10,851 family doctor’s offices throughout the country.

Although the Cuban National Public Health System was created in 1968, to implement a set of measures to deal with infectious and contagious diseases, malnutrition, parasitism, anemia, and others, the family medicine model emerged in 1984, as part of the necessary transformations in a society facing new challenges.

The emergence of family medicine sought to eliminate the fragmentation and super specialisation of medical care; combat depersonalisation and indiscriminate use of technology; coordinate care within the community; channel the dissatisfaction of the population with services; respond to the demographic transformations that lead to changes in morbidity and mortality; establish the emergence of medical thought based on a clinical, epidemiological, and social approach; and achieve a qualitative increase in the population’s health.

Dr. Sandra Galano Urgellés, head of the Centro Habana Medical Care Department, and speaker on the subject of family medicine at the 2018 Cuba-Health International Convention in Havana, explained that the family doctor and nurse program, also known as the “Physician for 120 Families Plan,” began as a pilot program on January 4, 1984, at a polyclinic in Lawton neighborhood, in the Havana municipality of 10 de Octubre, with ten pairs of doctors and nurses, who formed basic teams to provide care to 600-700 people.

They worked to improve the health of the population through comprehensive actions aimed at individuals and their families, the community and the local environment. Due to the results achieved, the program was extended throughout the country and before the end of 1984, there were already 237 family doctors enrolled in a new medical specialty: Comprehensive General Medicine.

In the first six years, the number of doctors rose to 12,000, to serve a population of more than seven million people, covering rural and difficult to access areas, and insisting on prevention and awareness measures to prevent the emergence of diseases, with a coherent connection between the neighborhood and medical institutions, including research institutes.

“Family doctors stand as the guardians of public health. They are the first point of contact the population has with healthcare services. Our main task is to prevent people from getting sick,” the specialist in Comprehensive General Medicine explained.

Toward this end, doctors continuously assess patients’ risk factors, based on family genetics and social factors, taking into account the initial evaluation to classify them into four groups: healthy patients; those at risk; those who suffer from a chronic disease; and the disabled.

“For each of these groups, consultations are planned according to a schedule based on the condition and the frequency of its evaluation. If the patient is unable to come to the clinic, they are visited at home, in what we call field consultations. We even undertake medical admissions at home to treat some viral, bacterial, or other conditions,” explained the doctor.

Although work is ongoing to digitalise medical records, for the moment the majority consist of patient record cards, including the necessary classification, and the schedule and results of all appointments and consultations, to ensure visibility and control over health measures.

Family doctors follow a treatment protocol applied at a national level, according to the conditions they are dealing with, and therefore are part of medical research through the introduction of new drugs, and the implementation of 16 specific health programs, such as the maternal and child health, oncology, communicable and non-communicable chronic diseases, and HIV-AIDS care programs.

To undertake these efforts, they receive guidance and support in basic working groups which include specialists in pediatrics, gynecology, social workers, sociologists, and vector control workers, and are integrated with the more than 450 polyclinics in the country.

“It is up to doctor’s offices to plan consultations in all other specialties, and through these, more widespread services are offered at the community level. In our offices, adults, children, pregnant women, and the elderly are all treated free of charge and with a comprehensive approach by various specialists. The main aim is to tackle health issues or impact on those that could pose risks with the potential to trigger disease,” the specialist added.

This means coordinating hospital appointments with the arrival of specialists working in second level institutions to the community. These specialised doctors are referred to the patients they will attend. “For example, if a person needs to be evaluated by an angiologist, we communicate with the polyclinic, request the appointment and the patient leaves with the day and time that the specialist will receive them. This facilitates specialised consultations,” explained Dr. Galano.

She noted that this type of experience could be of valid use in other countries. In fact, similar programs have already been implemented in Venezuela with the Barrio Adentro (Inside the Neighbourhood) mission; and Brazil, with the Mais Médicos (More Doctors) program. Dr. Galano also highlighted that it would be much easier to implement such a program in developed countries, with greater economic resources, although it must always be adapted to the social context in which it is put into practice.

Despite its three decades of existence, this is a model that continues to be developed, perfectible and open to change, according to the specific health issues of each community. The main challenge is to constantly innovate, while at the same time maintaining its founding principles.

“Thanks to this type of community program, our country has obtained tangible results in lowering the infant and maternal mortality rates, low birth weight, and other social achievements,” the specialist added, who stated she was a loyal advocate of family medicine, an area that is little explored worldwide.

Results obtained in Cuba with the family medicine model

- Immunisation coverage of 98.7% of all children under one year of age, against nine diseases. Since 2016, the Cuban child population has been protected from 13 preventable conditions with vaccines

Measures taken in Cuba to strengthen the Program

- Sustainability of health coverage and greater accessibility to medical services

- Guaranteeing continuity of care with an appropriate referral system

- Systematisation of research and the introduction of results in medical practice

- Innovation of the family medicine model without renouncing its foundational concepts

- Adaptation of health services to respond to population aging

- Comprehensive care for women, children and the elderly