"We need to show Trump that he is not welcome here": Latin America against Trump rally 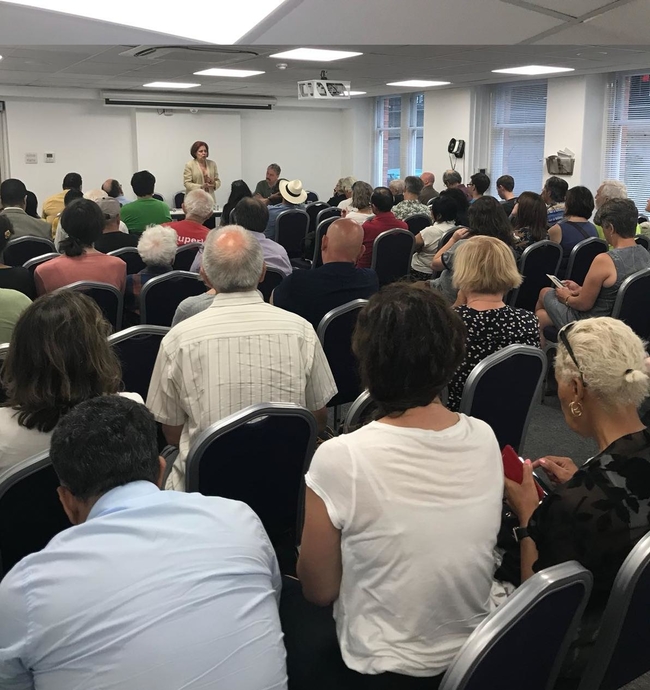 Latin American ambassadors, campaign groups and migrants were amongst the speakers and audience at the Latin America against Trump rally in central London, organised in the run up to Trump’s visit to Britain on 13 July and to build the Together against Trump national demonstrations.

Kiri Tunks, NEU (NUT Section) President welcomed guests to the union’s headquarters and said “We will show Trump on Friday that he is very unwelcome here. The NEU celebrates immigrants and celebrates refugees - refugees are welcome here.”

She highlighted women’s rights in Cuba and criticised President Trump “for attacking women’s reproductive rights” in the US and overseas.

Arturo Rodriguez, general secretary of Cuban Industrial Workers’ trade union said "We never expect anything from the government of the United States."

He reminded the audience that US intervention in Cuba and Latin America was a long history. “The US attempted to kill Fidel over 600 times - but he lived until he was 90 years old!” he joked.

"Over 70 percent of the Cuban population were born after the triumph of the Revolution and have lived under US blockade all their lives since.

“The blockade is still there, and Trump has made stronger”, the general secretary said.

“We've always had a lot of faith in victory- we will continue to construct our socialism. No force on earth can crush the power of truth and ideas”, he said.

Lupita Valdés from Justice Mexico Now gave an update on the huge human rights abuses and tens of thousands of people who have disappeared in the last decade in Mexico. But there is now optimism for change in Mexico, she said, and congratulated ‘AMLO’ - Andrés Manuel López Obrador - on his recent emphatic presidential victory.

H. E. Rocio Maniero, Venezuelan Ambassador noted how "Trump has tightened the US blockade of Cuba and introduced sanctions on Venezuela and Nicaragua" whilst H. E. Guisell Morales-Echaverry, Nicaraguan ambassador noted how the US “has been blockading Cuba for 60 years… they attacked Nicaragua in the 80s and again now, and have been attacking Venezuela for the last fiver years or more”.

Lindsey German, Stop the War convenor said how “This isn’t just about what’s happening with Trump and the United States. It’s also about what is happening here and happening in Europe. It was the British government that sent vans around immigrant communities here saying ‘Go Home’. We have our own hostile environment here that we have seen in the Windrush scandal.

“But the Latin Americans know first-hand about the danger of Trump. He’s threatened invasion of Venezuela. He’s called Latin American migrants animals. We need to respond to say that we don’t want this hate in our politics. We need to show him that he is not welcome here.”

Unite Assistant Chief of Staff Adrian Weir chaired the rally. “Please do make sure you attend the Together against Trump demo on Friday. There will be a Latin America against Trump bloc, meeting at 2pm at the BBC, Portland Place, W1A

“Tonight and Friday are opportunities for Latin American communities and campaigns to come together and send a message that his policies of war, destabilisation, racism, contempt for LGBT+ rights and the environment, and hatred are not welcome”, he said.

An inspirational speech from Chris Williamson MP ended the rally: “The demo on Friday is an opportunity to stand up to a bully and for dignity in Latin America. The demo can show the living form of solidarity, if you will, by turning out in huge numbers”

“The United Kingdom doesn't welcome despots like Trump. We need to give him a visit to remember, in all the wrong ways!” the Labour MP said.

Join the SCSC on the anti-Trump demo in Glasgow