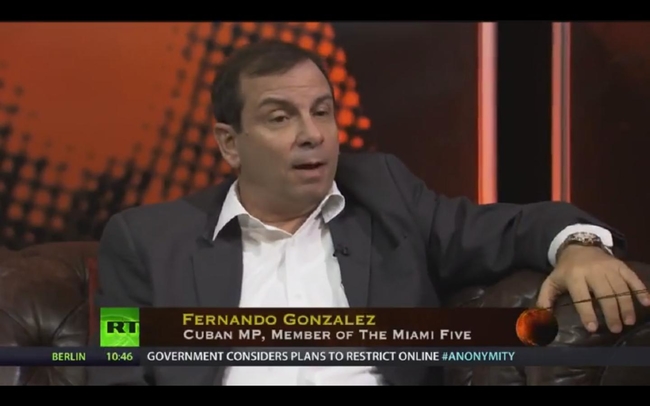 "A hero of the Republic of Cuba, to paraphrase the great John Lennon, is something to be" George Galloway said in his welcome to Fernando Gonzalez.

Fernando Gonzalez Llort, Miami Five Hero, President of ICAP (Cuban Institute of Friendship with the Peoples) and Cuban MP, was invited to Britain by Cuba Solidarity Campaign to attend the CSC AGM, meet with MPs and Lords in the Houses of Parliament and speak at trade union events including the UNISON NDC in Brighton.

During his visit, he was interviewed by George Galloway, former MP, filmmaker and broadcaster, for RT’s Sputnik show. Fernando spoke about his experience as one of the Miami Five, the international solidarity that helped win their release, the future of Cuba under the new President Miguel Diaz-Canel and US-Cuba relations under Donald Trump.

“Of course we were aware of the international campaign to free us. Friends from all over the world wrote to us when we were in prison…. And I can say that it was from this country that we received the most correspondence, since the beginning of the campaign”, Fernando said.

“And that’s because the Cuba Solidarity Campaign here is easily the best solidarity campaign in Britain, on any subject”, Galloway replied.

You can watch the full interview on the video above or on CSC's YouTube channel here.