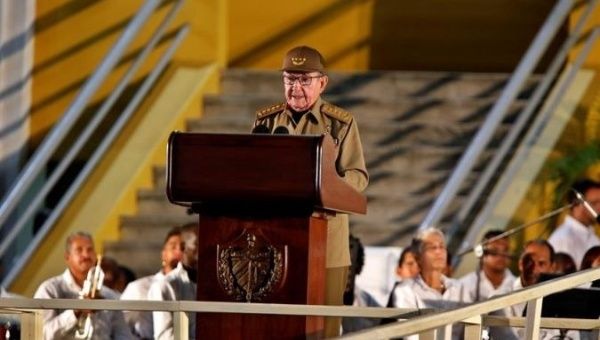 Raul Castro said Cubans "will forever defend its socialist revolution” and remain unified in their defense of Venezuela and Nicaragua.

Former Cuban President and leader of the Communist Party of Cuba, Raul Castro, denounced, on Thursday, that the United States is "narrowing the siege" against his country, Venezuela and Nicaragua, calling on all committed persons to be prepared to "respond to every challenge."

"For us, as for Venezuela and Nicaragua, it is obvious that the siege is narrowing, and our people must be alert and prepared to respond to every challenge with unity, firmness, optimism and unshakable faith in victory," said Castro.

He indicated that the return of right-wing governments to power in Latin America and hostile policy of Washington to the regional left have "shaped an adverse scenario and again euphoria resurges in our enemies and the rush to turn their dream of destroying the example set by Cuba into reality."

Dressed in his army general uniform, Castro was speaking to a crowd on the occasion of the 65th anniversary of the assault on the Moncada barracks, the start of the Cuban Revolution.

He stressed that since August 2017, "bilateral ties have been degraded" between the Caribbean island and the United States with the "pretext" of the so-called "sonic war" against U.S. diplomats in Havana. However, he pointed out that nobody has been "able to explain or prove" that such attacks even took place.

Likewise, Castro said the U.S. blockade against Cuba has been "intensified, particularly the persecution of our financial transactions." Washington's official pronouncements on the island "are characterized by disrespect, aggression, interference and gross manipulation of historical truth," Castro said.

However, Cuba's former head of state warned the U.S. government that the Cuban people have "taken all risks and resisted" for 60 years, and that "however difficult the circumstances, no matter how great the challenges...will forever defend its socialist revolution.”

He expressed “the invariable solidarity of our people, party, and government" with Venezuela and Nicaragua during these difficult times.

Castro also said that Cuba is demanding "the freedom of comrade (Luiz Inacio) Lula da Silva and his right to be the presidential candidate of the Workers' Party," in October and congratulated the President-elect of Mexico, Andres Manuel Lopez Obrador, "for his historic result" at the polls.