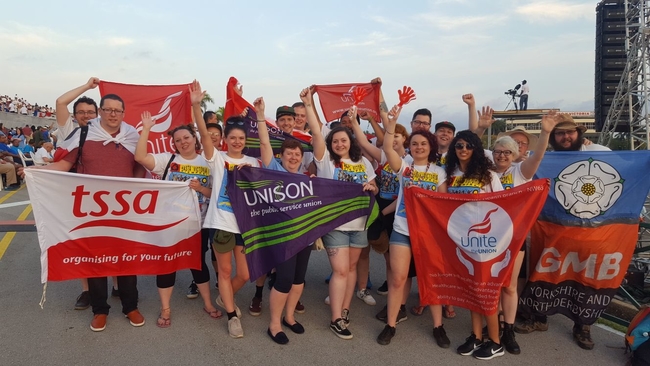 The British solidarity brigade contingent was joined by more than 300 delegates from 35 countries at the Julio Antonio Mella International Camp (CIJAM) in Artemisa province, 40km from Havana. They took part in a full programme of workplace visits, meetings with trade unions and agricultural work.

“We received a fantastic welcome with a Cuban night with live music and salsa dancing. The facilities were basic with makeshift bunks in dorms, however, we soon adapted to camp life,” Gemma Weavis Long, a TSSA delegate said about their arrival on the camp.

The young members carried out agricultural work, where they gained first-hand experience of the difficulties facing Cuban farmers due to lack of machinery caused by the US blockade.

Barry James, a TSSA delegate said: “Although our contribution was only really symbolic and a gesture of solidarity with Cuba, the farm workers and co-operative welcomed us and were genuine in their appreciation. At the end of both stints of agricultural work we were treated to music and fruit produced on the farms.”

The delegates attended the huge May Day rally as special international guests at Havana’s Revolution Square. The 2018 May Day was an historic occasion, the first since the election of President Miguel Díaz-Canel. The new president and former president Raúl Castro were both in attendance and waved at the huge crowds. The general secretary of the CTC (Cuban TUC), Ulises Guilarte, gave an inspiring speech as the Habaneros marched in their workplace and trade union blocs.

Unite North West delegate, Alex Ehrlich said “I have never seen anything like it. Over 800,000 people turned up to march in Havana. The march lasted around three hours through Revolution Square. Six million people participated nationally.”

On 2 May, the delegation participated at the International Solidarity Conference at Havana’s Convention Centre.

The annual conference was attended by over 1,400 international guests and speakers included Ulises Guilarte, CTC general secretary, Fernando González, Miami Five hero and president of the Cuban Institute of Friendship with the Peoples, and myself.

I was asked to speak on behalf of CSC and European solidarity organisations about the impact of neo-liberal policies across Europe. I also addressed the extraterritorial impact of the US blockade of Cuba in Britain and outlined CSC’s campaigning work and victories, including the overturning of the Open University’s ban of Cuban students.

Unite the Union delegates, Muhsin Manir (London and Eastern Region) and Rachel Coyle (Ireland) spoke at the conference on behalf of the delegation and pledged solidarity from the British and Irish trade unions in Cuba’s struggle to end the US blockade and for the illegally occupied Guantánamo Bay to be returned to Cuba.

The brigade included a four day trip to Camagüey in central Cuba, the island’s third largest city and a ten hour bus journey from the camp. Here the delegation visited a local secondary school where they met with students and teachers, a cheese factory where they met with the trade unions and a visit to the Eduardo Agramonte Pina children's hospital, where they saw first hand the achievements of the Cuba’s free and universal healthcare system.

Matthew Morris, RMT delegate said “It was absolutely fantastic to learn more about the Revolution and Cuban politics, and how the US blockade directly affects Cuba and its economy and its people. I learnt a great deal. A country that spends around 52 per cent of its GDP on healthcare and education is a model that the entire world, I feel, needs to embrace.”

Unite North West delegate, Victoria Egerton said “As well as seeing first-hand the impact of the US blockade and the achievements of the Cuban Revolution on the brigade, we also built international solidarity with other trade unionists from across the world. We learned of their struggles, their fights and their victories. From the Miami Five and the independence movement of Puerto Rico, to the Brazilian people’s fight to free Lula, we learned about their cause and joined their fight.”

The group visited the Ché Guevara monument in Santa Clara and also the site of Ché’s victory at the battle of Santa Clara where the revolutionaries derailed a train full of supplies and troops for the dictator Batista’s army. The site known as ‘Tren Blindado’ is a national monument, created in memory of the events of 29 December 1958.

This year’s brigade were a wonderful group who bonded together brilliantly. They have all committed to continuing their solidarity work with Cuba and many have already got their local union and Labour Party branches to affiliate to the Cuba Solidarity Campaign.

Join the 2019 young trade unionists’ May Day brigade to Cuba

If you have any questions or would like any further information about the brigade, please don’t hesitate to contact Ollie Hopkins, Campaigns Officer on campaigns@cuba-solidarity.org.uk or 0207 490 5715.