Standing room only at the Unison NDC Cuba fringe 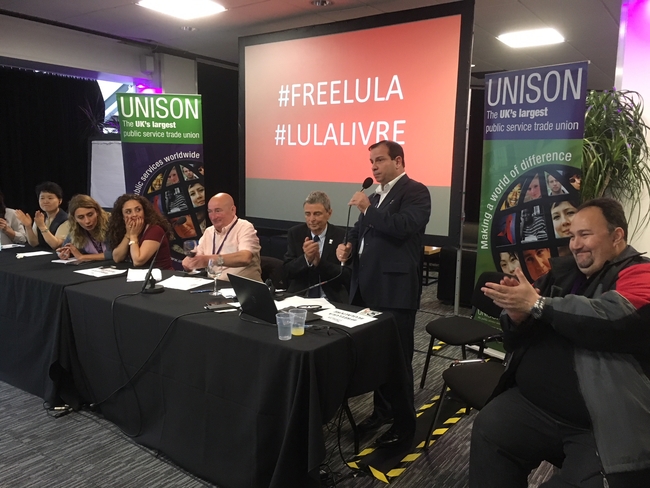 “The Cuban revolution has always been about internationalism and solidarity”, Miami Five hero tells Unison delegates

Here he addressed the union’s Internally Rally on the eve of conference, alongside its general secretary, Dave Prentis, and other international guests from Turkey, Brazil, South Korea and Colombia.

Referencing comrades from Brazil’s social security workers union who were representing the ‘Free Lula’ campaign, Fernando said that his presence at the conference, previously unthinkable, should give hope to other political prisoners.

“When I was in prison I was aware that there were events like this going on tonight around the world for my freedom,” he said, and went on to thank the union for the work they had carried out over sixteen years to free the Miami Five.

At a packed fringe meeting in front of 250 delegates Cuban ambassador, Teresita Vicentre, proudly announced that more than 50 per cent of Cuban National assembly members elected in the last general election were women, making Cuba the country with the second highest number of women MPs in the world.

“It would be selfish of me just to come here and talk about solidarity with Cuba,” Fernando told the crowd: “The Cuban Revolution has always been about internationalism and solidarity. It’s not only the blockade and the return of occupied land at Guantánamo. It’s about US imperialist attacks on Venezuela and Nicaragua”.

“Cuba will continue to be the socialist revolution it as been since 1959. No matter if Trump is there or someone else. He can come, he can go. The Cuban Revolution will remain standing”, he concluded.

Thanks to Roger McKenzie, Assistant General Secretary for Chairing the fringe and to Thompsons Solicitors, North West, West Midlands, Scotland and London regions for sponsoring the event.