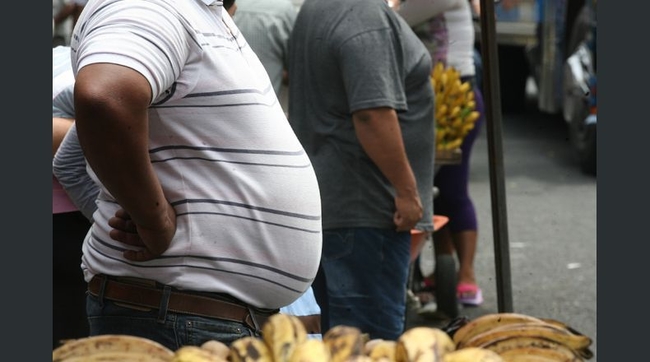 Obesity is also a global phenomenon, which according to United Nations statistics, affects one in every five men and five in every 10 women on the planet, causing low self-esteem, a negative body image, depression, stigmatization, marginalization, and isolation

With an 18.1% increase over recent years in the number of overweight women in Cuba, and an increase of 11.4% in regards to men; the island’s government and health authorities have expressed their concern over the rising rate of obesity across all age groups of both genders.

Obesity is also a global phenomenon, which according to United Nations statistics, affects one in every five men and five in every 10 women on the planet, causing low self-esteem, a negative body image, depression, stigmatization, marginalization, and isolation.

It also impacts public health policies, with individuals more likely to develop type-two diabetes, which is usually asymptomatic in its early stage, but can later cause cardio vascular, renal, respiratory, and joint problems, as well as other chronic non-transmittable diseases, resulting from a poor diet.

In its report entitled “Panorama of Food and Nutritional Security in Latin America and the Caribbean,” the United Nations Food and Agriculture Organization (FAO), highlights the efforts of the Cuban state to ensure food security on the island through the implementation of social policies. However, consuming high levels of fats, sugar, and carbohydrates continues to be the national norm.

Despite undertaking health and social initiatives, combating this chronic disease - marked by an imbalance between caloric intake versus caloric expenditure, resulting in an excess of fat cells which can be harmful to a person’s health - among the Cuban population will continue to be a challenge for future generations.

Actions are taken starting from early childhood, as obesity is one of the most difficult and frustrating illnesses to treat in preschool children in Cuba, where it affects 10.5% of boys and 5.9% of girls, thus the need for early diagnosis and continual monitoring, in order to combat and prevent this illness.

In this sense, health authorities are implementing a multi-sectoral program focused on timely and necessary intervention by the family and school, the promotion of physical exercise, and creation of a healthy environment, with nourishing food options for the population.

The country is following strategies identified by the Pan American Health Organization (PAHO), such as implementing legislative and regulatory frameworks related to processed foods and sugary drinks, which include: labelling frozen and semi-processed foods; nutritional education for children and adolescents; and using traditional and alternative media outlets to provide families with relevant information.

The PAHO also contributed to the development and dissemination of normative proposals contained within Food Guides, including ones on clinical treatment for the prevention and management of overweight and obese children and adolescents; the promotion of physical activity; and healthy food in schools.

Theodor Friedrich, FAO representative in Cuba, has proposed increasing domestic agricultural production, and ensuring that produce arrives fresh to consumers’ tables, thus avoiding the need to add preservatives and chemicals to foodstuffs which are usually canned or frozen.

The UN representative praised Cuba’s National Urban and Suburban Agriculture Program, which was first implemented in the 1990s and continues to date. The initiative has helped to raise awareness among families of the importance of eating fresh fruits and vegetables for a more nutritionally balanced, safe and healthy diet.

In this sense, he spoke about the need for Cubans to make healthier lifestyle changes, through the promotion of national and cultural values, and homegrown ways of living, as opposed to foreign modes of consumption. He ended by noting, “We must expand and diversify agriculture throughout the country in order to produce more food. This will contribute to consumers’ eating healthy meals and to teaching agricultural workers to produce responsibly and conscientiously.”