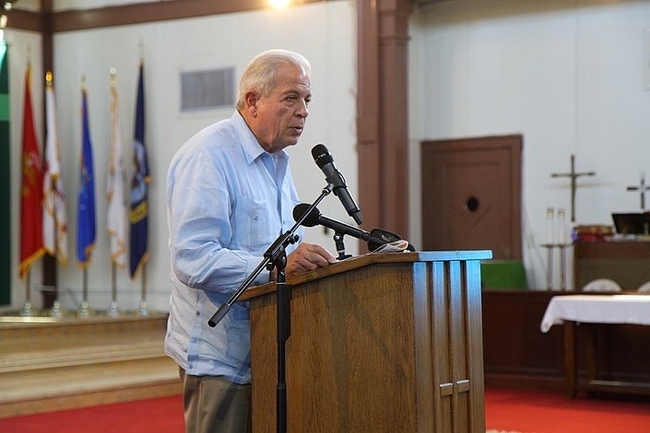 Whether or not Donald Trump colluded with Russian agents, there's no doubt Moscow is running a sophisticated online campaign to sow dissent in America. Robert Mueller has already indicted numerous Russian agents for using Facebook to meddle in the 2016 election, and journalists have clearly spelled out how Vladimir Putin's Internet Research Agency manipulates the web.

The United States has even condemned the Russian government and sanctioned its leaders. But at the same time, the U.S. has put together its own plans to use Facebook to foment dissent clandestinely in Cuba.

At the centre of those plans is the U.S. Office of Cuba Broadcasting, which runs the Miami-based Radio Martí, TV Martí, and Martí Noticias. OCB is led by former Miami Mayor Tomás Regalado.

The plans are spelled out in budget documents for the 2018 and 2019 fiscal years from the U.S. Broadcasting Board of Governors, which runs pro-U.S. networks such as the Voice of America and Radio Free Europe. The agency says the government has plans to use "native" and "non-branded" Cuban Facebook accounts to spread government-created content without informing Cuban Facebook users:

Due to Marti’s web blockage on the island, OCB’s digital strategy has shifted into a social media consistent with the metrics that place YouTube, Google, and Facebook among the most visited sites in Cuba. With the use of AVRA technology, Radio Marti programs evolved into visual radio and streamed via Facebook Live along with the TV Marti programming. This provides OCB with an additional efficient and cost effective distribution outlet both for its radio (visual radio) and TV content.

In FY 2018, OCB is establishing on island digital teams to create non-branded local Facebook accounts to disseminate information. Native pages increase the chances of appearing on Cuban Facebook users' newsfeeds. The same strategy will be replicated on other preferred social media networks [emphasis by New Times].

The documents don't explain what the feds mean by "non-branded" or "native" Facebook pages. But it's clear they would be meant to look like the pages of regular social media users in order to evade censors and persuade Cubans to read Martí propaganda.

Regalado, who is usually accessible, did not respond to multiple messages from New Times seeking comment. But Nasserie Carew, a spokesperson for the Broadcasting Board of Governors, says the Facebook project "never got off the ground." That's an odd response — the plan has been referenced on budget justification documents for the past two years.

Carew says she can't explain what the agency meant by "non-branded" Facebook accounts. She acknowledges the plan was designed to "get around the censors" in Cuba, but since Regalado took over, the project has stalled, she claims.

But the budget documents suggest the OCB planned to spread U.S. propaganda through Facebook channels designed to fool Cuban users into thinking the information was coming from other Cuban users — not Regalado's office in Miami.

Spokespeople for Facebook did not respond to multiple messages from New Times. But the federal government's Facebook plans are just the latest in a long, mostly futile effort by the OCB to reach Cuban audiences. The United States launched Radio Martí during the Reagan administration and added the TV station in the early 1990s under George H.W. Bush. The stations have since created the website Martí Noticias.

But the Castro regime has largely succeeded in blocking TV signals, and internet usage is heavily censored on the island; surveys have shown for decades that less than 10 percent of the Cuban population tunes into the radio broadcasts. Less than 1 percent of Cubans say they watch TV Martí programs despite U.S. taxpayers providing nearly $800 million in public funding for both networks.

The stations are infamous for Wile E. Coyote-esque stunts to evade Cuba's censors, including flying a propaganda-broadcasting TV blimp nicknamed "Fat Albert" 10,000 feet over the Florida Keys that broke loose in 1991. In 2005, the OCB tried to fly a small "AeroMartí" airplane over the island. But as of 2013, American taxpayers were shelling out $80,000 a year to keep the AeroMartí plane grounded in Georgia, because Congress had not killed the program but also had not allocated enough funding for the plane to fly. In 2014, the OCB created the spam-text-message service Piramideo (Pyramid), which also did not succeed in fomenting dissent in Cuba. The OCB for years smuggled in small satellite devices that could provide internet access but stopped in 2015 due to cost overruns and because many users were simply using the devices to watch porn.

(USAID, a different federal agency, also got caught in 2014 running a fake "Cuban Twitter" social-media platform on the island called ZunZuneo. The Associated Press reported that the government planned to push anti-Castro messages through the service.)

Last January, President Trump created the Cuba Internet Task Force, which the State Department said would "examine the technological challenges and opportunities for expanding internet access and independent media in Cuba" and seek ways to spread social media use and uncensored internet access on the island.

If the Facebook-propaganda plan actually took flight under that program, it fit into a long history of trying to use modern technology to shoehorn propaganda into Cuba, says Penn State University professor John S. Nichols.

"There are certainly red flags here," says Nichols, the co-author of the 1987 book Clandestine Radio Broadcasting, about the OCB's efforts. "It's the most recent of a very long line of efforts by Radio and TV Martí and its predecessors to try to overcome the laws of physics... Every time they fail in getting their message into Cuba, they say there has got to be a technological solution."

Instead, he says, Congress "just can’t seem to recognize that the stations are a colossal failure. It's sad because they’re spending taxpayer money. But what it really wastes is our credibility as a great nation by doing these silly, stupid things."

In the meantime, Regalado's office continues to burn through millions of taxpayer dollars. Prominent politicians on both sides of the aisle, including Arizona GOP Sen. Jeff Flake, have called the programs counterproductive and a waste of money. Democratic Rep. Betty McCollum killed the AeroMartí program in 2015 and called the OCB unnecessary.

"Radio and TV Martí­ are outdated Cold War artifacts,” McCollum said in a 2015 release. “Our taxpayers should not be funding propaganda broadcasting."

But the programs continue to exist thanks to a handful of anti-Castro lawmakers, including Miami Rep. Mario Diaz-Balart, who is Fidel Castro's nephew by marriage and a longtime Radio and TV Martí booster.

Earlier this year, Sen. Marco Rubio helped install Regalado, an old friend, as head of the Martí programs. Regalado has since made grandstanding promises about how Radio and TV Martí have new plans to reach as many as "5 million" Cuban citizens in the next few years. He appeared last week on the Spanish-language U.S. network MegaTV to brag about using new, mystery technology that the Cuban government can't jam. He said 200 Cubans had received the alleged receivers.

"It is a technology that did not exist, and since they do not know it, it will be almost impossible to block it," Regalado said in Spanish.

His comments sparked a flame war with Cuba's state-sponsored media. According to WPLG, Cuban outlets such as Cubadebate published op-eds laughing at Regalado and calling out the OCB for its years of ineptitude.

Nichols argues the channels' propaganda efforts are damaging the United States' standing around the world.

"Third-party countries see what they’re doing and say, 'There goes the United States again doing that dumb stuff,'" he says. "It's small, mean, and not worthy of a great power. Other countries say, 'If the U.S. is willing to violate international law, why should we obey our treaty obligations?' I think that has a long-term negative effect. And given what Radio and TV Martí might doing right now, it becomes hard for us to complain about what other countries might be doing to us."