Cuban women of the 21st century 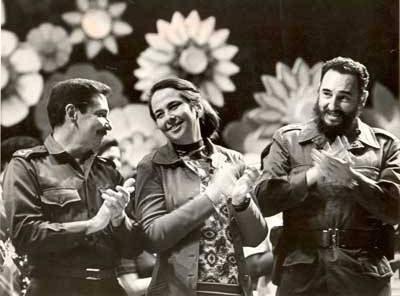 We are Cuban women of the 21st century, as I recently read. We see our dreams on the horizon and are moving forward. We are not very different from the women who came before us. Our characteristics have stood the test of time, allowing us to accomplish so much of what has been achieved in the country.

Since the revolutionary war, underground and in the Sierra Maestra, Cuban women have shown our bravery, intelligence, and above all, the will to accomplish everything we take on. This is why the right to a safe, legal abortion, free of charge, has been in place for almost 60 years. We were the first country in Latin America to promulgate a divorce law, and sex education is provided beginning in elementary school. Gender equality is addressed in all environments, as is ending violence against women and girls.

We have accomplished so much. We could say we are a leading country when it comes to the victories of women, but this does not mean we are done. When we say that we see our dreams on the horizon, we know that as long as we continue dreaming, the horizon recedes and we have farther to go.

Being a revolutionary means more than defending the homeland. It implies changing, breaking barriers, and transforming. Vilma Espín is no doubt one of the most revolutionary women ever in Cuba. She struggled not only for her country’s independence and freedom, but advocated for the rights of women throughout her life, as well.

She did so raising her voice, but also in action. On August 23, 1960, the Federation of Cuban Women (FMC) was founded, an organization she led until her death in 2007, advocating for the full participation of women in society and the workplace, alongside the program of social and economic changes unfolding in the country.

Today on its 58th anniversary, the FMC has close to four million members and carries out activities across the country to support families. In the Guidance Centers for Women and Families created by the FMC, educational and preventative work is done to provide assistance to women, children, older adults, and men in facing conflicts, be they related to violence, legal issues, family dynamics, or others.

Also available at these centers are classes and training that allow homemakers to participate in social life. Activities include community visits to maternity hospitals and schools to address responsible sexuality and teenage pregnancy. Staff is also involved in responding to anti-social behavior, including the detection of illicit drug trafficking and consumption, as well as prostitution.

Another effort of the FMC is the “Educate your child program” for mothers and their preschool children between the ages of two and five, to prepare these boys and girls for the school environment.

To accomplish all this, the FMC has a staff that includes social workers and other professionals to ensure that mothers and families can participate in activities and courses, and work for greater and better incorporation of women in society. There are those who don’t like statistics, but in many cases these provide an added dimension to work carried out anonymously, giving isolated events visibility. In Cuba, women constitute 48% of all workers in the civilian state sector.

According to FMC General Secretary Teresa Amarelle Boué, also a member of the Communist Party of Cuba Political Bureau, Cuban women have excellent opportunities to work, participate, and lead. One example is that eight of every ten attorneys in the country are women.

At the end of 2016, 37% of all workers in the economy were women, constituting 63% of all technicians and professionals. Their participation in the non-state sector has been gradually increasing, Amarelle noted in a recent interview published in Granma.

In the healthcare sector, 78.5% of those practicing medicine are women; almost half of scientific researchers are female; and women occupy 66% of the most highly skilled technical and professional positions in the country – receiving equal pay for equal work.

On another front, legislation affords women special rights to pre and post maternity leave, and working mothers have the right to breastfeed their babies as long as they see fit.

Currently, women constitute 53.2% of deputies in the National Assembly of People’s Power, 33.5% of delegates to Municipal Assemblies and 51% at the provincial level. Of the country’s 168 municipalities, 66 have women leading their governments, as is the case in nine of the nation’s 16 provinces.

Still moving toward that receding horizon, Cuban women of the 21st century have more battles to win. While the results of our efforts have been significant, with women’s presence in Cuba ever more active and authentic, we continue dreaming.

In arenas devoted to achieving gender equality and ending violence against women and girls, being debated are issues related to stereotypes that persist in a society that remains patriarchal and machista. The aging of the population enters into the picture when inequalities in the responsibility for domestic tasks and home care are considered. Likewise, work continues to reduce the rates of teenage pregnancy and maternal mortality, which are low when compared to other countries of the region, but continue to be high given our standards.

Isabel Moya Richard, outstanding journalist and for many years director of the Editorial de la Mujer publishing house, said in one of her last interviews that the challenges facing Cuban women were many: “The first is that it is widely believed that we have already won it all. When we look at statistics and see the number of women in Parliament, the number of female scientists, female communicators, and that more than 70% of attorneys are women, etc, we fabricate an idea that distorts reality.

“We have been able to open the way in professions previously not considered appropriate for women. Now we are in a more complex time, that of confronting subjectivity, culture, value judgments and customs – much more difficult to change, since this is about canons deeply seated in the collective imagination, in social expressions:”

The road has been long, but productive, and it will continue to be so, with the horizon as our goal. The Federation of Cuban Women has reached its 58th birthday, and this new year of life is full of challenges, with much more to be accomplished.

- The Federation of Cuban Women is organised at the national, provincial, municipal and grassroots level.

- Its National Directorate is composed of a National Committee and a Secretariat, in charge of implementing agreements adopted in Congresses held every five years.

- The National Committee includes representative women from all social sectors and those in decision-making positions in key ministries, the Communist Party of Cuba, trade unions, and other social organizations.

- Any Cuban woman upon reaching 14 years of age may join the FMC.

- The President of the FMC is a member Cuba’s Council of State.