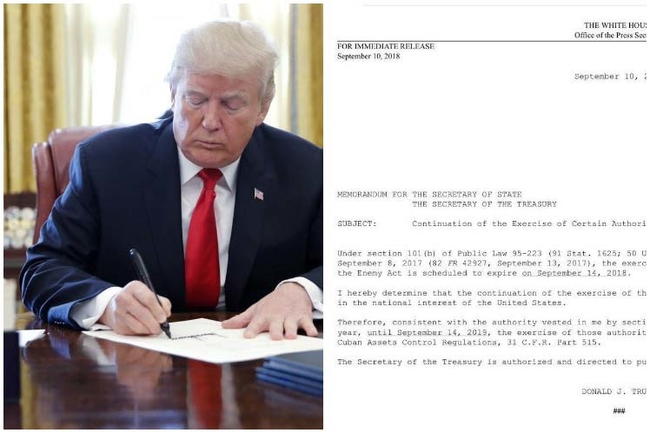 HAVANA, Cuba, Sept 10 (ACN) Trading with the Enemy Act, one of the legal basis of the blockade imposed by the United States against Cuba was extended on Monday by US President Donald Trump through a memorandum sent to the Secretary of State and Treasury.

This is the second time that the current administration extends the validity of the law, approved in 1917, giving the US President the possibility of applying economic sanctions in times of war or any period of national emergency in addition to prohibiting trade with the enemy or its allies during any military conflict.

This act, valid since the First World War, is the oldest legislation of its type and only applied against Cuba, even though the White House has never declared a national emergency regarding the Caribbean island.

President John F. Kennedy resorted to the law in 1962 to impose the blockade against Cuba and Washington has applied other measures destined to economically asphyxiate the Caribbean island among them OFAC Regulations.

These restrictions prohibits any US citizen to carry out financial transactions with Cuba, which in addition to restricting its citizens, imposes an extraterritorial character to the blockade, and damages third countries.

Several chapters of the Trading with the Enemy Act is currently used to grant specific licenses for limited commerce between Cuba and the United States; however, its extension responds to a policy of reinforcing the blockade by the Trump Administration defined in his speech in Miami on June 16th of 2017.

The Commerce, Treasury and State Departments issued new regulations and dispositions in 2017 that restricts travel to Cuba including a travel warning to reconsider possible visits to the Caribbean island.

The US State Department issued last November a "Restricted List of Cuban Entities" which included 179 companies with the objective of obstructing economic and commercial relations with Cuban companies with potential US partners and third countries.

According to the annual report in virtue of Resolution 72/4 of the UN General Assembly recently made public by the Cuban Foreign Ministry, the US economic blockade against Cuba has been "reinforced and continues with its application with rigor" during 2017. Cuba has had economic losses of over $4.321 billion dollars during the period of April 2017 to March 2018.