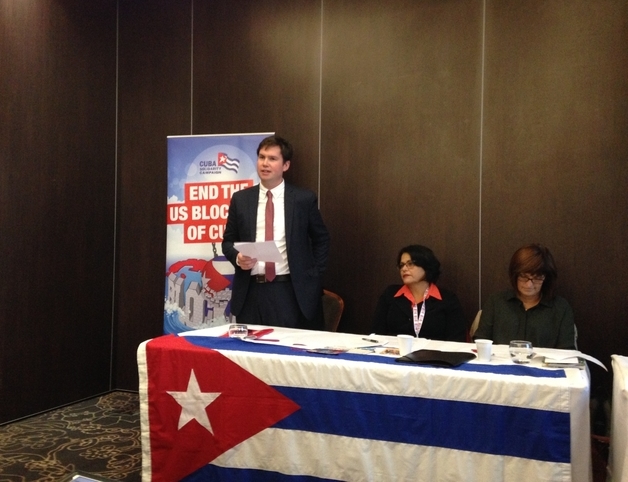 The meeting, entitled Trump: Hands Off Cuba and Venezuela! No to blockade and sanctions! was chaired by Karen Lee MP, Chair of the All-Party Parliamentary Group on Cuba. “Trump is increasingly intervening in Latin America” Lee said. “He should never have been invited to Britain this year – he’s not welcome here!” she said to huge applause.

Her Excellency Teresita Vicente, Cuban Ambassador, said “Trump has further tightened the US blockade - and its extraterritorial effect impacts British businesses here who want to trade with Cuba."

"Solidarity is needed with Cuba” the Ambassador said. “And solidarity is also needed with Nicaragua and Venezuela, as they are both currently under attack from increasing US intervention and regime change activities”.

Dan Carden MP, Shadow Minister for International Development, said “Cuba works to support health care among the most disadvantaged groups, including indigenous peoples, women and persons with disabilities in many developing countries over the world.”

The Shadow Cabinet minister said that the US blockade of Cuba must be lifted: “Every sector of society suffers”, he said, “but education, health, and industrial development are particularly affected.”

“And it impacts on Cuba’s ability to support other countries too. Cuba was the first country that the World Health Organisation called to provide support the Ebola outbreak in West Africa. Cuba sent over 250 doctors, but for several weeks, Cuba had to cover the cost of food and lodging expenses for dozens of its doctors fighting Ebola in Sierra Leone after the US blockade delayed payments from the World Health Organisation.”

“For a small island with limited resources, the Cuban people have made up for what they lack in material and financial wealth with international humanitarianism.

“No one says Cuban society is perfect, but Cubans have a right to self-determination. Trump has no right to promote regime change for Cuba, Venezuela, Nicaragua or anywhere else in Latin America,” Dan Carden MP said.

Adrian Weir, Unite the Union Assistant Chief of Staff, posed the question, “Why is the US blockade in place? Because Cuba is the threat of a good example, 90 miles away from the US - a country that spends over half its budget on health, education and social care", he said.

“The blockade has now cost Cuba over $933 billion US dollars”, Weir said, and he gave an update on the approaching United Nations general assembly 27th consecutive annual vote on Cuba’s resolution to end the blockade.

"Cuba's blockade report to the United Nation general assembly outlines the impact on Cubans with special needs, including Cuba being unable to access US-made Braille machines.

“International solidarity is crucial in the campaign to end the blockade against Cuba. Many thought we would never get the Miami five out. But now they are all free.”

Chris Williamson MP, spoke about the increasing danger of US intervention in Venezuela and Latin America: “We can never ever allow what happened in Chile to happen again”, he said, whilst ended his speech with a rallying call of “No more Pinochets in Latin America!”

CSC also ran a very busy stand at the Labour Party conference, where dozens of new members joined the campaign and hundreds of delegates wore the hot-off-the-press Cuba60 lanyards, celebrating 60 years of the Cuban Revolution in 2019.

Thanks to Unite the Union and Thompsons Solicitors for sponsoring the fringe meeting.