The rhythm of socialism 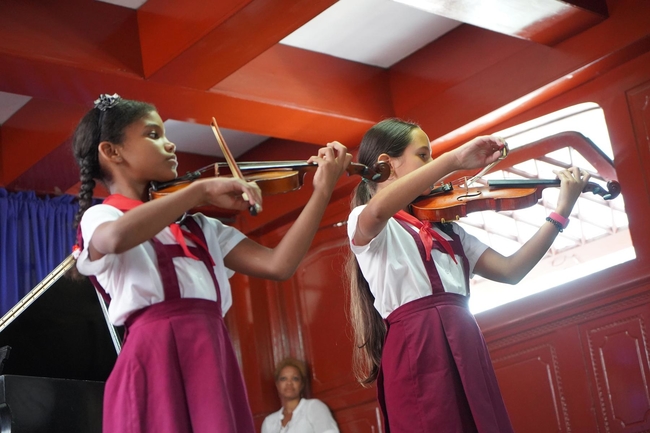 CUBA is well known for its love of dance and music. Children and adults here at home are used to seeing and hearing salsa music on the television and online, but it is still a welcome surprise when you visit Havana to see and hear a live band in most bars and hotels.

On Sundays, the sound systems are out on the streets and people are dancing together, changing partners with each song, young and old together, and the streets are alive with joy, music and movement.

The Cuban education system clearly promotes music and dance at all levels and age groups. Music education is embedded in the general curriculum for all and further activities can be accessed in the “interest clubs” at school. Interest clubs take place in the afternoons in every school, and children can attend a wide variety of extracurricular activities, provided by staff, parents and the community.

These include music, sport, computing, arts and so on. School starts early and finishes with a late lunch, but most children are at school until about 4.30pm.

During the annual NEU delegation to Cuba in October 2018 we visited eight schools in five days. In every school a welcoming party of students, including children as young as four and five sang, danced, spoke or recited to us.

This was in primary and secondary schools, music and arts schools and in the special schools. All the students seemed to relish the opportunity to share their skills and love of Cuba and pride in learning with us.

One secondary girl performed solo, unaccompanied, giving a stunning performance at the school entrance in front of us all. She later told us she had come third in a national televised talent contest — surely an (inter)national star in waiting.

As part of the state education system there are specialist arts and music schools for children who show early promise or talent in a particular field of performance. From Year 3 (Grade 3) children can be selected and invited to join their local arts or music school, where the formal curriculum is the same as everyone else’s, but there is also a lot of music or dance training.

We were privileged and overwhelmed to see children in the music schools as young as Year 4 performing for us. We listened and watched soloists, duets, groups and whole classes playing a wide variety of instruments and singing in harmony. Their training is classical and appears to be highly disciplined and formal.

One young student stuck in my mind because she must have taken at least 30 seconds to compose herself at the piano before starting to play the most stunning piece. Another young pianist performed her own composition, singing as she played.

The choirs were a joy, singing in wonderful unison and harmony about their love and pride for their country, its people and traditions. There is little that can beat a rousing and moving choral performance in my opinion.

We saw a secondary-aged band of percussionists, violins and singers, playing a variety of songs, all under the musical direction of the young bass player. We heard large groups of violinists, and then guitarists, some playing the traditional Cuban guitar, the tres, which has just three strings (or three pairs of strings, each pair tuned to the same note). Some of these musicians were as young as nine.

We also saw an incredible group dance which ended up involving all the adults in the room by the end, including the cooks in the doorway, the caretaker, a friend in another entranceway and other students. A pair of students told a mesmerising love story through dance as well.

At a secondary school, not an arts school, two students introduced the Q&A session with a particularly powerful dance performance.

The schools, teachers and students don’t have much in terms of material resources, mainly due to the impact of the illegal US blockade, but they have opportunity, talent, dedication and enthusiasm — and that’s both the staff and the students.

It is clear from watching and listening to the children and young people of Cuba that they love learning and playing music and that this love is nourished throughout the education system. It is equally clear from the sights and sounds of the streets that music is part of everyday life, culture and tradition for everyone in Cuba.

As with so many areas of life in Cuba, music and dancing removes any barriers and allows happiness, love and equality to flourish.

The NEU is working alongside the Cuba Solidarity Campaign and Music Fund for Cuba to support the Play for Cuba campaign, which was launched at the NUT conference in April 2018. We are calling for donations of new and second-hand instruments for young Cuban musicians, which will be shipped to Cuba at Easter 2019. Collection points for any old or new musical instruments can be found on the website www.playforcuba.org