60th anniversary messages flood in from across the globe 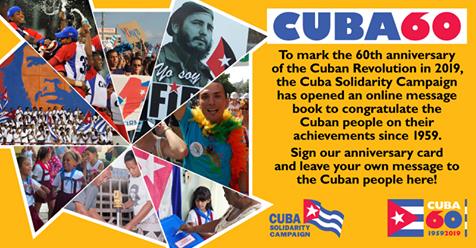 Almost 1,000 people in less than a week have added their 60th anniversary messages to congratulate the Cuban people on their achievements after 60 years of their Revolution.

Hundreds of friends from across the globe, including parliamentarians and trade union leaders have sent messages of solidarity.

To add yours go to https://cuba-solidarity.org.uk/Cuba60

Many MPs and politicians have also added messages and photos.

‘Despite sanctions, an illegal blockade and the enmity of the world's biggest superpower, you have built a society which puts people before profit…’ Chris Williamson MP

'Sending very best wishes to my Cuban friends on the 60th anniversary of the revolution.' Karen Lee MP

People from across Britain have posted heartfelt messages of solidarity and friendship, and there have been hundreds of posts from across the globe including messages from Botswana, Australia, United States, Canada and South Africa.

'Cuba is a shining example to the world of how we all should live.' Marian Wingrove (Britain)

'Congratulations on Cuba achieving the second highest number of women MPs in the world at 53.2%. In Botswana, the figure is just 9.5%' Daisy Bathusi (Botswana)

'Thank you for your contribution to the liberation of the peoples of Southern Africa - it will be forever be etched in our hearts. History speaks for itself with regard to Cuba's internationalist solidarity with the oppressed masses of our people without seeking any gain in return.' Sisa Makabeni (South Africa)

'Against all the odds, under the most challenging circumstances from the US blockade, Cuba has developed a society based on social justice, education, health and internationalism. Congratulations and solidarity greetings!'Emma McInley (Britain)

'To the beautiful people of Cuba: congratulations to you, your spirit, your sense of community and togetherness, and to all of your achievements toward a more just and humane society!' Darlena Luppino Torres (United States of America)

'My everlasting thanks and admiration to the courageous people of Cuba. Since 1959, they have provided an example in action of love with their vast and consistent contribution to the welfare of humanity.' Suzanne Weiss (Canada)

'Cuba remains a beacon to the world for its justice, fairness and care for its people. Australia is a rich country but still has more than a million children living in poverty. We have a lot to learn from you.' Gail Harper (Australia)

To add your message go to https://cuba-solidarity.org.uk/Cuba60