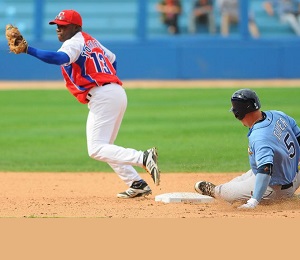 “Today is a happy day for Cuban baseball, for the world, the people of Cuba and the United States,” stated Higinio Vélez Carrión, president of the Cuban Baseball Federation (FCB), at a press conference shortly after the FCB and Major League Baseball (MLB) announced the historic agreement reached, by which Cuban players will be able to sign with any of the 30 MLB teams, without being forced to defect.

The agreement was reached between the two non-governmental organizations and the Major League Baseball Players Association (MLBPA), and guarantees the orderly and non-discriminatory presence of Cuban baseball players in U.S. baseball. That is to say, Cuban players will be able to sign with MLB teams without losing their Cuban residence or their link to the island’s baseball teams, as has been the case until now, which has damaged the national game and participation in international events. At the same time, it provides a safe way for Cuban players to make this move, without having to go through unscrupulous third parties.

Vélez explained that the contracts with Major League teams include a release fee paid to the FCB, just as occurs when the MLB signs players from professional leagues in Japan, Korea and China. “This does not affect the hired player’s salary,” he added.

“This is a victory for Cuban baseball, its quality, the commitment and value of its players. It is also recognition of men like Omar Linares, the best player to have featured in the National Series, and Rodolfo Puentes, one of the most brilliant shortstops of our classics,” the FCB president emphasized. Both sports stars, executive members of the FCB, were present at the press conference.

“It’s a very important day for us. I think baseball and the players are the great architects of this achievement. It didn’t come in time for those of my generation, but we did our bit,” Linares told Granma.

Under the agreement, the FCB will release hired players aged at least 25 years old, and with at least six years experience playing in the National Series. Additionally, it could release players who do not meet these requirements, who would be hired as amateurs in the Major Leagues.

According to the FCB press release, the agreement also applies to Cuban players who have emigrated to third countries to try to reach the Major Leagues and, for various reasons, have not achieved this and have been reinserted into the national competitive system.

“In the current 58th National Series, already coming to a close, a total of 38 players who were in that situation have played with their respective teams, and offered good performances. They are figures of this agreement,” stressed Vélez.

“The agreement will help curb illegal activities such as human trafficking, which for several years has put the lives and physical well-being of many young Cuban baseball talents and their families at risk. It is also part of the effort to continue strengthening the practice, enjoyment and development of the national sport. The agreement will have a positive impact for many athletes in the country, for national teams and the FCB,” he continued.

MLB Commissioner of Baseball Robert D. Manfred, Jr. said: “For years, Major League Baseball has been seeking to end the trafficking of baseball players from Cuba by criminal organizations by creating a safe and legal alternative for those players to sign with Major League Clubs.”

Meanwhile, MLBPA Executive Director Tony Clark noted: “Establishing a safe, legal process for entry to our system is the most important step we can take to ending the exploitation and endangerment of Cuban players who pursue careers in Major League Baseball. The safety and well-being of these young men remains our primary concern.”