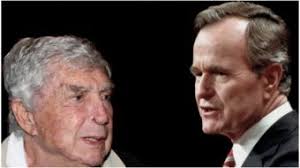 Former president George H.W. Bush recently died. Stories abound as to his civility and easy interaction with political associates and casual contacts alike. In Maine, where his family owns a summer home, the press highlighted such qualities and also his generosity. The assumption prevails that affability softened the hard edges of wielding power. Dark corners in Bush’s political life receive less attention.

The criminal Luis Posada Carriles lived in one of them. President Bush’s dealings with Posada reflected amorality, want of ethical principles, and dedication to preserving a world of privilege. The contrast between a decent-guy image and easy tolerance of blatant criminality is striking.

It’s a blight recalling the high-minded framers of the U.S. Constitution who owned enslaved people. Bush resembled the “gentleman” southern planter of pre-Civil War years whose hands were not often dirtied. An underling enforced the “pushing system” of industrial-scale cotton production. (1) Similarly, Bush himself didn’t perform the dirty deeds against Cuba.

On-call thugs were central to both projects: the overseer with a whip and Luis Posada. On September 7, 1988 Iowa Senator Tom Harkin exposed the connection between Posada’s crimes and Bush’s permissiveness.

Bush was running for president that year. Harkin, speaking in the Senate, announced that “the American voter deserves answers from George Bush to some tough questions about his and his Vice Presidential office’s relationship with a known international terrorist, Luis Posada Carriles.” (2)

He points out that Luis Posada Carriles and Felix Rodriquez were colleagues in a “White House operation” that in 1985 – 1986 delivered weapons from El Salvador to Contra counter-revolutionaries in Nicaragua. He adds that Posada “had spent 10 years in a Venezuelan jail for blowing up a Cuban airliner, killing 73 people, in 1976.”

Observing that Rodriquez was Bush’s “good friend,” Harkin asks Bush – who was not present and who never responded – “did you ever ask him about his associates and whether he had in his employ Posada?” Then as regards Cuba: “Mr. Bush, when you were CIA Director in 1976, did you ever investigate the role of Posada and other Cubans in the 1976 airliner bombing?”

According to Harkin, Bush “took a personal interest in this and a string of related anti-Castro bombings that shook the hemisphere that year, 1976.” He identifies Posada as an operative of the CORU group of terrorists responsible for the bombings. And Posada “worked for the CIA on contract as late as 1975.” Actually Posada “worked virtually full-time for the CIA from the Bay of Pigs invasion in April 1961 until 1967.” So, says Harkin, “the first step is to come clean about Luis Posada, the international terrorist.”

He concludes: “The Posada case demonstrates that you didn’t bother to use your offices and your International Terrorism Task Force to investigate the activities of a known international terrorist. Was it because, Mr. Vice President, of Posada’s ties with your ‘good friend’ Felix Rodriquez? Or was it because of Posada’s role in organizing the secret Contra supply operation run out of Ilopanga airbase [in El Salvador]? Or was it because of Posada’s past ties with the CIA, which you headed in the mid-1970s?”

During his tenure as CIA director Bush could have hobbled Posada the terrorist who had worked for or with the CIA. That didn’t happen. Posada had free rein to plot the airliner bombing, deliver weapons to the Contras, arrange to have hotels in Havana bombed in 1997, and try to kill former Cuban President Fidel Castro in Panama in 2000.

Harkin’s last question lingers, although answers fall short. Fabian Escalante, former head of Cuban intelligence services, provided insight, however. He claimed that Posada joined other Cuban-American assassination experts banded together in the CIA’s “Operation 40,” based in Miami. Escalante cited sources indicating that a few members of that group, Posada included, were present at Dallas’s Dealey Square on the day that President John Kennedy was killed.

Escalante suggested that Posada’s grim deeds go unpunished, because “he has a life insurance policy, which is what he knows about the Kennedy plot.”

In the end, it’s clear that President George H. W. Bush in normal circumstances was accommodating and adept at social niceties. It’s clear also that when the stakes were high – bringing down the Cuban Revolution, for example, or institutional loyalty, or both – opportunism took precedence over ethics.

In any case, dirty war against Cuba was a project far larger than the actions of Bush or Posada alone. Attacks on a wide front have been constant and probably continue. They are bereft of an ethical North Pole.

According to journalist Arthur González, scientists have recently identified the presence in Cuba of a new serotype of hemorrhagic dengue. That potentially fatal infectious disease has been endemic in Cuba ever since the 1981 appearance of a earlier serotype. The outbreak then, widely attributed to biologic warfare at the hands of the United States,sickened more than 344,000 people and killed 159.

González claims that U.S. operatives introduced the currently new microorganism. The purpose, he states, would be to disrupt tourism and force Cuba to spend money on controlling an epidemic rather than on solving current economic problems.

Tried in New York in 1984 for murders and terrorism, CIA agent Eduardo Arocena, a Cuban-American with terrorist associations, confessed to have introduced harmful biologic agents in Cuba. Many think he had a role in promoting the 1981 epidemic. Gonzalez catalogues diseases of pigs, dairy cattle, sugar cane, plantain, citrus fruits, and coffee plants for which he blames the United States.