Diaz-Canel: Cuban medical collaboration will never be for business sake 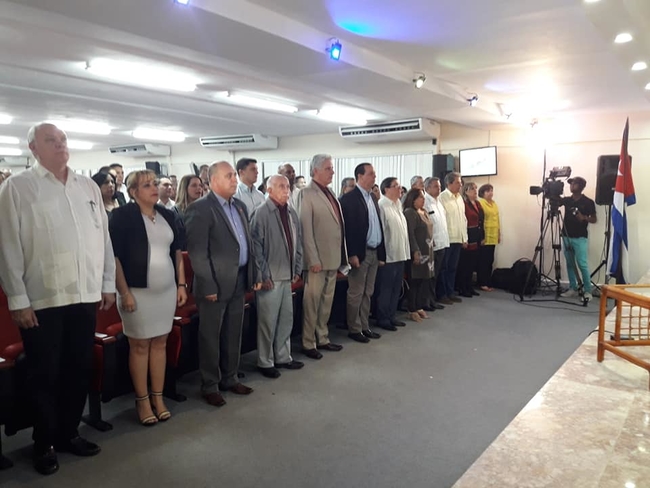 Miguel Díaz-Canel, President of the Councils of State and Ministers, reiterated that Cuba's collaboration in the field of health will never be for business sake; it will always be guided by the values of humanism, solidarity and internationalism.

Summarizing the central act for the culmination of the Cuban Medical Brigade in the More Doctors for Brazil Program, he informed that of the 8,471 collaborators who were in that country when the decision was made on November 14 not to continue participating, 7,635 concluded the mission, more than 90 percent, and so far 836 have not returned.

Diaz-Canel recalled that the initiative was born because of the enormous gaps left by the market in the majority of the poor population in Brazil.

He pointed out that recent news reaffirms that fact, when it was known that only less than 10 percent of the positions occupied by Cubans have been covered by Brazilian professionals; "not everyone is willing to face the noble trade in the worst conditions," he said.

In Cuba, health professionals are trained with an attitude contrary to monetary calculations; altruism, generosity, willingness to save lives without thinking about the cost, is a fundamental principle of professional training, emphasized the president.

What to tell them after everything that has been said in these days under the emotion of their return, whose breadth honors and magnifies the homeland, he expressed to a representation of the doctors who raised the name of Cuba and were consistent with the ideas of Commander in Chief Fidel Castro.

He remembered when Fidel, in a moment that was transcendent for Cuban medicine and historical for the Revolution, and for internationalism: the inauguration of the Victoria de Girón Institute of Basic and Preclinical Sciences, announced what would be the most formidable training program for health specialists in the country, and for cooperation with other nations.
On the island, 35,613 health professionals from 138 countries have been trained free of charge, as an expression of our solidarity and internationalist vocation, said the Cuban leader at the ceremony held at the Central Medical Cooperation Unit, in which he alluded to transcendental moments in this field such as Operation Miracle.

He stressed that the United Nations Development Program and the World Health Organization describe Cuban medical collaboration as an example of good practices in triangular cooperation and the implementation of Agenda 2030, with its Sustainable Development Objectives.
These are the historical antecedents of the mission that took the Cuban doctors to Brazil, he pointed out, but not before clarifying that in the overwhelming majority of internationalist missions, the expenses have been assumed by the Cuban State.

As expressed in the MINSAP declaration of November 14, "the initiative of Dilma Rouseff, former president of the South American giant, had the purpose of assuring the largest Brazilian population, in accordance with the principle of universal health coverage promoted by the WHO," said the President of the Councils of State and Ministers.

He said that in these five years of work, close to 20,000 Cuban collaborators treated 113,350,000 patients in more than 3,600 municipalities, and up to 60 million Brazilians, at a time when they constituted 80 percent of all the doctors participating in the program, since it included Brazilians and foreigners.

Díaz-Canel highlighted the work carried out by Cuban in places of extreme poverty, a service also recognized by the population itself and the Brazilian government.

He explained that some of them formed families with Brazilian citizens and honored their mission and commitment to Cuban public health, even when they were already residents of that country.