US takes its blockade of Cuba to unprecedented levels 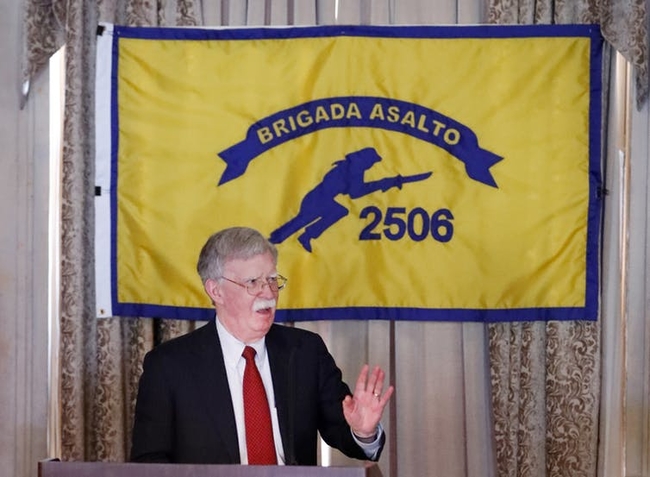 The Trump administration has announced the most severe economic sanctions against Cuba since the blockade was first introduced in 1962.

Speaking in Miami on 17 April, the 58th anniversary of the failed Bay of Pigs invasion, National Security Advisor John Bolton announced the end of virtually all non-family travel to the island and new limits on the amount of money Cuban Americans can send home to family.

He confirmed that the US government would fully implement Title III of the Helms-Burton Act, allowing Cuban Americans to sue foreign companies with investments in any property nationalised after the Cuban Revolution in 1959.

For 23 years, Title III of the Helms Burton Act had been suspended by every US president as a result of opposition from foreign governments. When Helms Burton was enacted in 1996, the European Union filed a complaint with the World Trade Organisation and passed a law prohibiting EU members from complying it. Mexico, Canada and the UK also passed similar laws.

The previously waived Title III allows entities and individuals to launch lawsuits in US courts against foreign companies accused of “trafficking” in property nationalised after the Revolution. Lawsuits had been limited to US citizens with claims to nationalised properties. From 2 May 2019, Title III will include Cuban Americans who were Cuban citizens at the time, despite these not being recognised as legitimate claims under international law. Following the Revolution, Cuba paid compensation to many other countries with claims against nationalised properties in accordance with international law, but the US government rejected this offer. Legal experts anticipate there may be as many as 200,000 cases when Title III is implemented.

The US blockade already constituted the longest economic sanctions against any country in history. It has cost the Cuban economy more than $933 billion dollars since 1962. The new measures increase the threats to deter foreign investment in Cuba and deprive the country of much needed resources.

There is speculation that the move is an attempt to court the votes of Cuban Americans in Florida in advance of the 2020 presidential elections. However, although it will play well with those right-wing Cuban Americans and politicians such as Republican Marco Rubio, polls show that many Cuban Americans want to regularly visit and financially support their families. Reducing family remittances will only directly hurt the Cuban people.

In response to the US measures, Josefina Vidal, who was a key negotiator with the US during the Obama rapprochement process and is the current Cuban ambassador to Canada said:

Miguel Díaz-Canel Bermúdez, the Cuban president recognised that the US had chosen a significant date to make the announcements and tweeted:

“58 Anniversary of Girón: The victory that #US does not forgive.
John Bolton met with the defeated in Miami, to recall the eternal disgrace of these mercenaries. We will make each calendar day a #GirónAlways
Bolton will be an eternal loser. #CubaWillWin”.

According to a statement from the European Union’s foreign policy chief Federica Mogherini and Commissioner for Trade Cecilia Malmström the EU “will consider all options at its disposal to protect its legitimate interests” and Brussels may launch a WTO lawsuit and invoke the EU’s Blocking Statute, which “allows EU companies sued in the US to recover any damage through legal proceedings against US claimants before EU courts.”

The British government said it would work with the EU to protect British companies and that it considered Title III sanctions to be “Illegal under international law, threaten to harm UK and EU companies doing legitimate business in Cuba by exposing them to liability in US courts.”

Canada, China and Mexico also condemned the US action, as did several democrat congresspeople, and the US Chamber of Commerce. Ben Rhodes, the White House official who had been responsible for former president Obama’s Cuba policy tweeted

“the only real consequence of Trump's policy will be to hurt millions of Cubans - denying them resources, drying up remittances, choking off the foreign travel they depend upon to make a living. It's an immoral end achieved by Trump's actions.”

“There can be no doubt that the US objective in Cuba is ‘regime change’”. These new policies are intended to wreck the Cuban economy and cause maximum suffering to the Cuban people. While we welcome the statement by the British government that it will protect British companies wishing to trade with Cuba, it is also vitally important that it stands up to US threats by continuing to positively engage with Cuba, as it did with the visit of Prince Charles and the Duchess of Cornwall in March 2019. We need to ensure that the government follows through on this by proactively encouraging and supporting UK investment in Cuba, and prosecuting any company or organisation that places US blockade laws above our own.

The Trump administration has proved itself to be one of the most cruel and vindictive since the blockade was introduced in 1962. It has reversed every positive step towards rapprochement made under the Obama administration, and dragged relations back into the Cold War era. We will continue to stand in solidarity with Cuba against US aggression and call on all supporters and friends of Cuba to make extra efforts this year to support the Cuban people in the 60th anniversary year of the Revolution.”