Cuban First VP: We come to pay tribute to Sandino 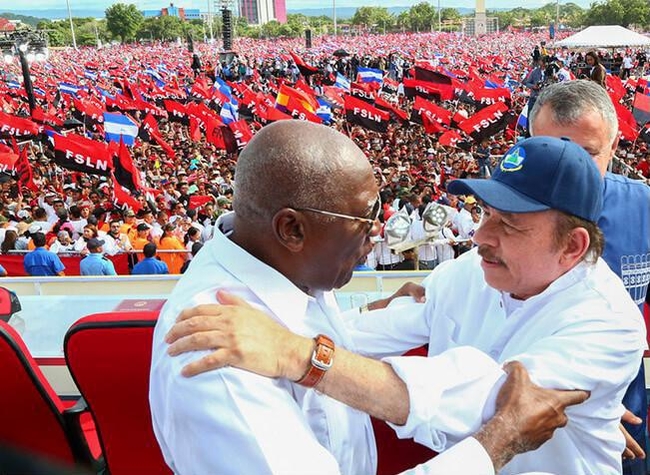 HAVANA, Cuba, Jul 19 (ACN) We have come to pay tribute to Sandino, Carlos Fonseca Amador and the leaders who made Nicaragua's independence possible, said Salvador Valdés Mesa, First Vice-President of the Councils of State and Ministers, on his arrival in Managua, the capital of that Central American country.

At the head of a delegation that also includes Bruno Rodríguez Parrilla, member of the Political Bureau and Minister of Foreign Affairs, and Juan Carlos Hernández Padrón, Cuban ambassador to Nicaragua, Valdés Mesa will participate in the celebrations for the 40th anniversary of the triumph of the Sandinista Revolution, which will be commemorated this Friday.

The cubaminrex website reported that upon his arrival at the Augusto C. Sandino international airport, the First Vice President of Cuba indicated that he had come on behalf of the Communist Party of Cuba, the Government and our people to convey the greeting and recognition for an event of such significance, which brought Nicaragua so much sovereignty, freedom and independence.

He expressed his hope that this Central American country will continue to advance along a path of opportunities and satisfaction for the Nicaraguan people.

He recalled that next Saturday will also be the 40th anniversary of the re-establishment of diplomatic relations between Cuba and Nicaragua.

The bilateral relations that we have maintained have been of a long friendship and solidarity, he added.

This date so significant for you and us will be an important occasion to continue deepening these special relations, concluded the Cuban First Vice President.

In the program for this date, the Cuban delegation laid a floral offering before the mausoleum that holds the remains of the three founders of the Sandinista National Liberation Front: Carlos Fonseca Amador, Santos López and Tomás Borge.

In the last two years, Cuba and Nicaragua have signed eight cooperation agreements in sectors such as education, tourism, trade, culture and communication, which have contributed to the strengthening of bilateral relations.

At the end of last school year, 4,630 Nicaraguans had graduated from Cuba, of whom 1,359 were doctors; 79 students from that Central American nation are currently studying undergraduate and graduate studies in Cuba.

Cuban First Vice President Salvador Valdés Mesa, participated July 19 in the national commemoration of the Sandinista Revolution’s 40th anniversary, in Managua, Nicaragua, stating that the triumph of the Sandinistas represents a victory against foreign intervention in the nation, and reaffirming the willingness of our peoples to struggle and resist imperialism.

Gathered in the Plaza La Fe, more than 500 international guests accompanied thousands of Nicaraguans during the celebration, where the vice president of this sister nation, Rosario Murillo, insisted "The brave and honorable people of our Nicaragua, always blessed and free, never sells out or surrenders.”

"At 40 years, full of glory, youth, history, and future, the Sandinista Popular Revolution marches on successfully and proudly," she said.

Cuba’s Foreign Minister, Bruno Rodríguez Parrilla, recalled the words of Comandante en Jefe Fidel Castro, who said, “The Sandinista victory is not only a victory over 45 years of Somoza; it is a victory over 150 years of foreign domination.”