Moncada: A victory of ideas 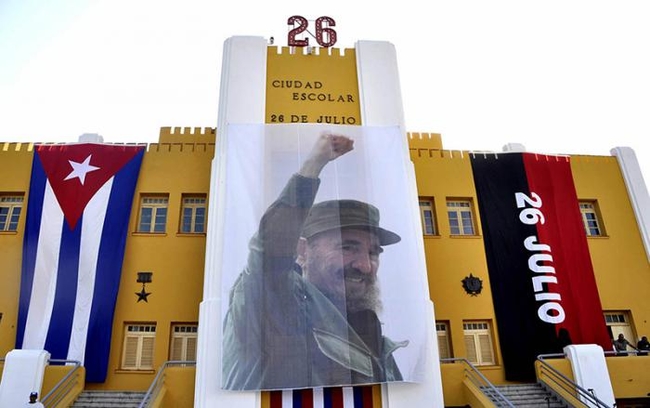 The July 26, 1953, events in Santiago de Cuba and Bayamo changed forever the direction of an entire country, and opened a new stage in the history of Our America

History cannot be forgotten. At a time when U.S. imperialism and its regional allies are intent upon eliminating the idea that “a better world is possible,” the Cuban Revolution and its heroic people are resisting at all costs, convinced of the justness of their ideals, and celebrating the 66th anniversary of the assaults on the Moncada in Santiago de Cuba, and the Carlos Manuel de Céspedes Garrison in Bayamo.

These glorious events changed forever the direction of an entire country, their greatness recognized beyond the nation’s borders, opening a new stage in the history of Our America.

The justness of their revolutionary ideas led the generation of Martí’s centenary, led by Comandante en Jefe Fidel Castro Ruz, to risk their lives to plant the seed of this historic change, which despite the failure of the military action would bear fruit a few years later.

The daring attack on the cruel U.S. backed dictatorship of Fulgencio Batista, allowed the population to gain consciousness of the need for armed struggle to transform the nation’s dire circumstances, with which Cubans retook the road to full independence, that given its projections and significance, became an example for Caribbean and Latin American countries, also battling to win their “second and definitive” independence, as José Martí said.

The armed action was based on a progressive program, in which the most important aspirations for socio-economic and political transformation at that time were outlined masterfully by Fidel in his historic ​​self-defense during the spurious trial that followed the frustrated assault, October 16, 1953, when the Comandante en Jefe ended with the celebrated phrase: "Condemn me, it doesn’t matter, history will absolve me."

The group’s action and program reflected a Marxist-Leninist analysis of the prevailing objective and subjective conditions in Cuba, which had matured extraordinarily following Batista’s pro-imperialist coup, on March 10, 1952, in order to prevent a majority party, of a reformist orientation, from coming to power through an electoral process, convened within the framework of “representative democracy,

” which the bourgeois regime itself, dependent on the United States, did not respect.The tactical setback suffered on July 26, 1953, when the military objectives foreseen in the action were not achieved, did not modify the historical results of the events, which were definitively inserted into the annals of Cuba’s revolutionary history.

A new stage of armed struggle was opened with the assault on the Moncada garrison in Santiago de Cuba, a city with a long tradition in the country’s previous independence wars, and the simultaneous attack on the Batista army’s garrison in the city of Bayamo - a stage that would continue until the dictatorship was overthrown January 1, 1959.

The deep convictions and ideals that motivated the glorious events were strengthened and extended. The Moncada became the antecedent and a valuable experience leading to decisive subsequent events: the Granma expedition, from the sister land of Mexico, and the guerrilla struggle in the mountains, which would be the principle form of revolutionary action, with the indispensable support of an underground movement across the entire country.

Fidel insisted that the Cuban people’s struggle for liberation did not begin that day: "The heroic march begun in 1868 by Céspedes was reinitiated, and later continued by that exceptional man whose centenary was commemorated the same year (1953), the intellectual author of the Moncada: José Martí.

”Sixty-six years after the Moncada, seen by many, inside Cuba and beyond, as an impossible "assault on heaven," the national celebration invites Cubans to reflection on the past, present and, above all, the future of the revolutionary struggle on the road to building a prosperous and sustainable socialist country, in which the greatest possible share of social justice is achieved.