Planning for the future - AGM report 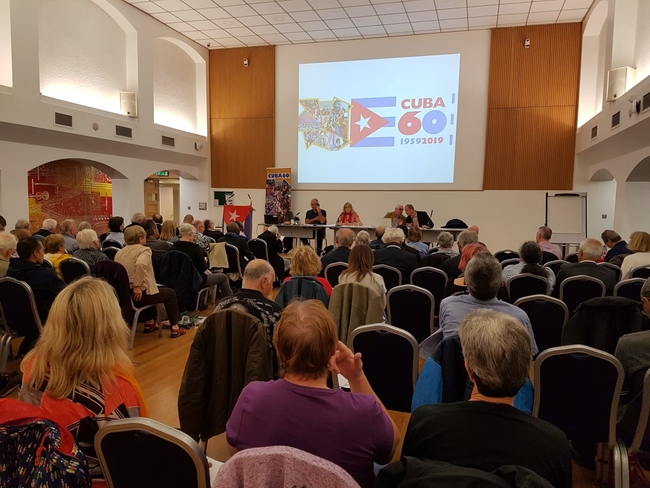 “We need to celebrate the achievements of the Cuban people, as well as campaigning to end the US blockade,” said Diana Holland, Chair of CSC and Unite the Union Assistant General Secretary, as she opened the 2019 Annual General Meeting of the Cuba Solidarity Campaign in June.

“At the NEU we’re proud of our solidarity with Cuba,” he said, and outlined the work the NEU has participated in.

“When you go to Cuba, you see a society where people are put before profit. Our members who have gone on delegations to Cuba come back enthused, and see that another education – and another world – is possible.”

CSC Director Rob Miller gave an overview of the Campaign’s last year of work, including the key role it played in organising the historic visit of Cuban President Miguel Díaz-Canel to Britain in November 2018. He thanked members, local groups, volunteers and staff for their solidarity work, which is even more vital now that US President Donald Trump has tightened the blockade. CSC’s role must be to increase pressure on the UK government to not comply with US extraterritorial blockade legislation, he argued.

CSC National Secretary Bernard Regan described the aggressive way that Trump had spoken at the United Nations, where he reinforced the Monroe Doctrine that the western hemisphere should be managed by the United States. “Trump went on to boast and threaten by mentioning the increase in military spending – waving a gun at nations who want to be sovereign and independent, if you like.”

CSC Executive Committee members Adrian Weir, Lauren Collins, Luis Santamaria, Wendy Emmett and Francisco Dominguez all spoke in support of resolutions on Title III of the Helms-Burton blockade legislation, climate change and solidarity with Latin America. The AGM concluded by electing 35 members onto the Executive Committee to carry out the agreed Annual Plan.

Dr Enmanuel Vigil Fonseca was a special guest keynote speaker for the AGM and for the public meeting that followed.

He thanked the “tremendous work” of CSC and said: “ending the US blockade is something that is difficult, but not impossible.”

Dr Vigil told CSC members about his experience of working as a volunteer in Sierra Leone to fight against the Ebola epidemic: “the crudest and most difficult six months of my life… there were so many people dying all around us – whole families, and children literally dying in your arms. And when you know that it’s a disease without a cure – it’s very difficult”.

After five years as Cuban Ambassador to the UK, Her Excellency Teresita Vicente will return home to Cuba in a few months. CSC presented her with flowers and thanked her for her committed work in Britain.

In an emotional farewell, Teresita thanked CSC for its campaigning work in solidarity with Cuba.

“I’ve made many friends and have learned so much and fell in love with your country,” she said. “There are so many people in solidarity with Cuba all around the country.”

“I’ll never forget René and Gerardo’s visit (Miami Five Freedom Tour), with thousands of people with Cuban flags, in solidarity with Cuba, with the support of the trade unions, and artists playing for them.

“You’ve made such a mark in my life, as a human being, as a Cuban.”

“We will not disappoint you. We believe socialism – real socialism – is the best system ever for human beings, giving them dignity.”

The day ended with six inspiring contributions from teachers who had recently visited Cuba on NEU (NUT Section) delegations. Lucy Coleman, an early yearsteacher from Oxford, compared Cuba’s achievements to the huge cuts and austerity agenda that education has faced for the last decade at home.

“I was humbled and inspired. The experience confirmed to me that I really do want to be a teacher – I do want to change peoples’ lives. Going to Cuba reaffirmed what teaching is – or can be.