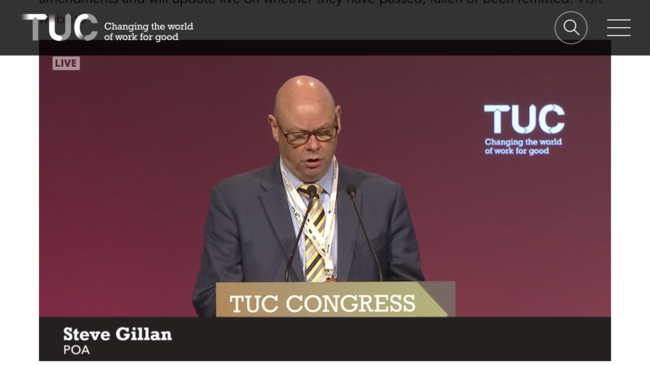 Watch the debate from TUC Congress

Trade unionists condemned US “aggression and cruelty” against the Cuban people yesterday.

Delegates at the Trades Union Congress in Brighton voted to oppose the Helms-Burton Act, legislation that could lead to British companies being sued in US courts for trading with Cuba.

Steve Gillan, general secretary of the POA prison officers’ union, described the Act as “economic warfare” and accused US President Donald Trump of attempting “regime change” as a long-term aim.

After criticising Mr Trump’s tightening of the blockade against Cuba, which has heavily impacted on Cuba’s tourism industry, Mr Gillan said: “These are worrying times for Cuba, and they need our solidarity.

“The country is not perfect — but they have achieved so much against the odds. Imagine what they could achieve without the blockade.”

TUC president Mark Serwotka told Cuban trade union leader Ulises Guilarte De Nacimiento that “he can take back to his colleagues the overwhelming support of conference.”