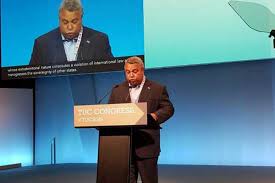 I am honoured in the name of the CTC – The central organisation of the Cuban trade unions, and all our affiliates in expressing fraternal greetings to the 151st TUC Congress, especially your General Secretary Frances O’Grady.

The TUC and the CTC have maintained historical relations of friendship, solidarity and mutual cooperation, which have passed the tests of time based on our traditions of struggle for the defence of workers' rights.

The land where Fidel Castro and José Martí were born, where Che Guevara fought for his ideals of justice, has endured more than 60 years of the criminal commercial and financial economic blockade that the United States government has imposed on us unilaterally, not bowing to the orders of the empire and building a social project flying the flags of socialism and independence. A blockade that has been tightened in a new interventionist escalation with the application of the Helms-Burton law passed in 1996, whose extraterritorial nature constitutes a violation of international law and transgresses the sovereignty of other states.

The blockade causes deprivation to our people, does not allow the acquisition of supplies, medicines and raw materials from North American companies, with consequent interruptions that paralyses our industries. It is the main obstacle to our development programs, limiting access to sources of financing and foreign investment, by exercising political pressures and penalising the banks that carry out commercial operations with our country.

As a result of the blockade, non-state workers involved in catering, running restaurants and guest houses and those who provide taxi services have seen their income and those of their families, reduced due to the closure of their businesses, because of the elimination of cruise and airline travel for American tourists, as well as the drastic reduction in licenses that Americans must obtain to travel to Cuba.

The Helms-Burton Act expresses the absurd idea of ​​establishing claims in US courts, demanding the return of land that before 1959 was in the hands of exploiters and which the revolution handed over to farmers who today produce food. It also enable legal claims on former military barracks used by the old Batista Dictatorship and now converted into schools where today more than 1.7 million children and young people study, and on factories now operated by our workers who own the fundamental means of production and generate the goods that the people require.

The blockade over six decades has caused huge losses to the Cuban economy of more than 138 billion dollars at current prices and 922 billion dollars taking into account the depreciation of the dollar, compared to the value of gold on the international market.

Its main objective is to strangle our economy and fracture the spirit of rebellion that fertilizes our revolution. With criminal eagerness, they never waiver in ignoring the practically unanimous mandate of the General Assembly of the United Nations that every year calls for the end of the blockade.

We need to strengthen the campaign outside Cuba to build understanding of the enormous magnitude of this perfidious aggression by the US against us, which mutates and diversifies daily without legal or ethical limits. We take this opportunity to wholeheartedly thank you once again, for the solidarity that we have received from you during all these years

Together we are sure we will win! The American empire already knows the taste of defeat on Cuban soil, such as the one we gave it in April 1961 in Playa Girón, (Bay of Pigs) in which international solidarity also played a crucial role.

The world of work is changing as a consequence of the rapid pace of technological innovation and the formation of new professional skills, demographic evolution and climate change, together with the progressive and systemic crisis of capitalism and the impact of its neoliberal policy causing the loss of social and labour conquests of large masses of workers.

This sad but real panorama, a reflection of the current unjust, exclusive and decadent international economic order, poses challenges for the international trade union movement, imposing on us the need to articulate more effectively a campaign of struggle and union action that increasingly integrates national, regional and international interests in different multilateral scenarios.

Fellow delegates and guests to this Congress:

Cuba, a small island in the Caribbean continues to be involved in the improvement of its economic model as a sovereign, independent, and socialist nation, a subject widely debated in our recently concluded 21st CTC Congress.

Likewise, as a result of a democratic, participatory and contributory process of popular consultation, the new Constitution of the Republic was approved, where rights that constitute a chimera for many countries of the world were endorsed for workers. With our own efforts, we have achieved world breaking results in global health and education indexes, in the promotion of gender equality, equitable well-being and in the development of international cooperation and solidarity.

These examples confirm that achieving the ideal of a better world goes beyond a national project and is part of an integrationist vision, that Cuba continues to demonstrate with its modest material and human resources.

In this sense we will continue to accompany the heroic resistance of the Venezuelan people, their legitimate president Nicolás Maduro Moros and the military civic union, which has caused the economic siege that they have imposed on him to fail. We demand the release of comrade Lula in Brazil, a prisoner under false charges and legal traps, we denounce the aggressions and lies spread against the Nicaraguan government, and we will work together with the social partners of the region for unity within the diversity of our America as the great Homeland that was the dream of our heroes.

The Cuban delegation expresses its gratitude for the invitation to participate in this Congress.

The international trade union movement can always count on the sincere voice of Cuba in the condemnation of injustice and inequality, while working for the establishment of a world centred on the human being, his or her dignity, and the well-being of workers.

Long live Solidarity among the peoples of the world!

Ever onward to victory.