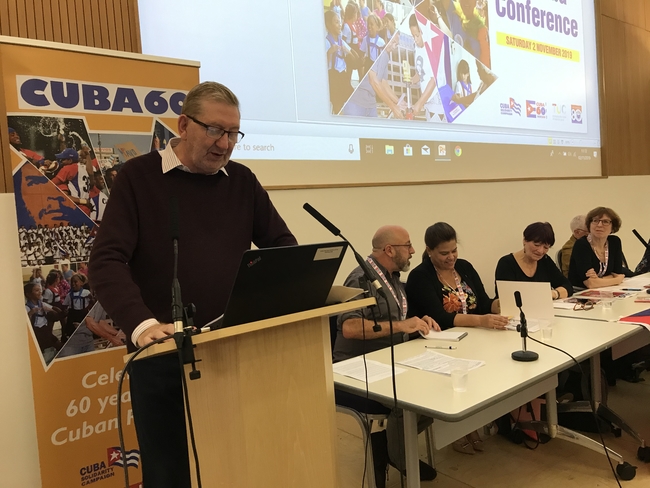 CUBAN trade unionists paid tribute to the “historic friendship and solidarity” between their and Britain’s labour movements at a packed Unions for Cuba conference in central London at the weekend.

Cuban trade union federation CTC deputy general secretary Carmen Rosa Lopez Rodriguez said British workers’ solidarity action in fighting the illegal US blockade of the island and for freedom for the Miami Five had “cemented our traditions of struggle and defence of workers’ rights.”

She led a delegation of 14 Cuban trade unionists, 12 of them women, who are visiting Britain this week to share experiences and build closer links with their British counterparts.

Saluting the internationalist outlook that has led Cuba to send medical workers and educators abroad, Unison London regional secretary Maggi Ferncombe praised Operation Miracle — the cataract-removing mission that has restored sight to 3.4 million people around the world — and the literary Yes I Can campaign that has taught nine million people in poorer countries to read.

Recalling the news of the revolution spreading among Liverpool dockers in 1959, he said: “In the community I come from I remember how welcome that news was.

“It brought to mind stories of the tears of joy shed by British miners at news of the Russian Revolution of 1917.

“The Cuban elite took off for Florida expecting to come back to their mansions and plantations in a few months. How wrong they were!” he said to stormy applause.

Looking to the election campaign now underway that pits a socialist and anti-imperialist Labour leader against Boris Johnson, he wondered “whether we in Britain might be taking steps in that direction.

“We are on the brink of a rebirth of collectivism in Britain,” he said. “And we are inspired by the way you have resisted the US blockade and [Donald] Trump. We are going to give this everything we’ve got — we will bring about irreversible change, irreversible socialism!”

Information and ideas shared at Unions for Cuba conference

Cuba Solidarity Campaign activist Lauren Collins described the three pillars of Cuban politics as the elected assemblies (national, regional and local), mass organisations such as the trade union federation CTC and the Federation of Women and the Communist Party, which does not participate in elections.

The interaction between these three shaped Cuban politics, she said, pointing out that policy in Cuba is decided through mass consultation which are “not like consultations in Britain where it’s over before you realised it’s happening. Everyone takes part.”

In a plenary on health, Labour NEC member and medical student Lara McNeill praised Cuba’s free training of medics — when British medical and nursing students rack up tens of thousands of pounds in debt — and its pursuit of cheap generic medicines to stop giant pharmaceutical companies ripping off the health service, noting that a Labour election win would see a similar approach to drug production introduced here.

But the shadow of the crippling US blockade loomed over the conference, with speakers denouncing the way it deprived Cubans of vital resources from radiotherapy equipment to braille machines.

Cuba Solidarity Campaign director Rob Miller listed fines of hundreds of millions of dollars levied by the US Office of Foreign Asset Control on British banks and companies for trading with Cuba despite Britain and Cuba enjoying full diplomatic and trading relations.