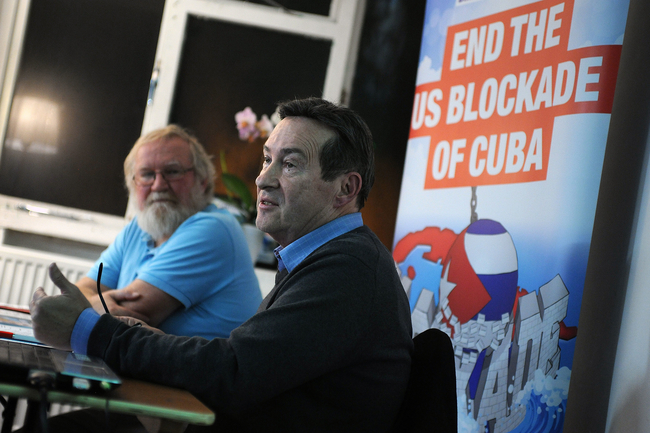 Canadian author and journalist Keith Bolender has spent the past three weeks travelling the length and breadth of the country speaking to CSC groups and community organisations. Keith has focussed his talk on understanding and counteracting the unrelenting stream of misinformation, myths, and outright lies against the Cuban Revolution.

With few exceptions the mainstream media has over the past 60 years endorsed Washington’s objectives to end Cuba’s socialist path and force the country to return into the US’s hegemonic embrace.

Keith began his tour in Scotland where he spoke at public meetings as well as at the Cross Party Cuba Parliamentary group in the Scottish Parliament. In Birmingham almost 40 people came along and 20 stayed after to enjoy a social event with Keith and his wife Magaly. In Shipley over 35 people heard Keith at the meeting, where there were lots of questions and the discussion was informative.

In London Keith spoke at meetings of newly formed CSC local groups in East London, South London and West London. Harsev Bains, the new coordinator of the group based in and around Southall, said that over 30 people came along from across the community and there was great enthusiasm for the new local organisation for Cuba.

Keith said the tour was “definitely hard work but was an amazing opportunity to speak to hundreds of people across the UK about the ongoing aggressions against Cuba. Too often people believe the anti Cuba propaganda that is being pumped out and it is essential that we do all we can to counteract this at every turn.”

Over 100 copies of Keith’s new book ‘Manufacturing the Enemy, the Media War Against Cuba’ were sold around the country. It is available from CSC here.

The tour wasn’t all work though. In Sheffield Keith reported on one of his highlights which was a visit to the Bakewell Pudding Shop where he was able to stock up on one of his favourite foods!