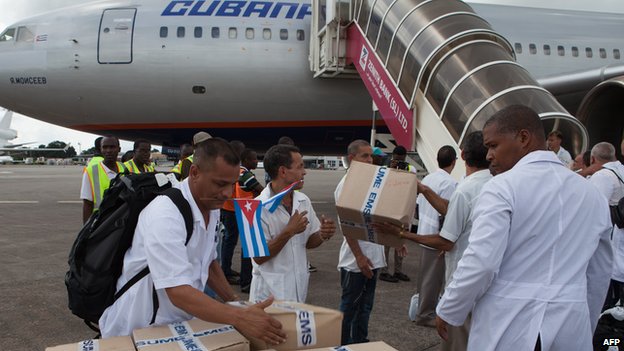 HAVANA, Dec 5 (ACN) The Cuban News Agency transmits the Declaration of the Ministry of Foreign Affairs, denouncing the campaign of manipulations carried out by the U.S. government to discredit the work of Cuban health professionals in different countries around the world.

As warned in the MINREX Statement of August 29, 2019, the United States government has, since last year, launched an intense and injurious campaign against the health care collaboration that Cuba offers, along with the threat of sanctions against Cuban leaders and pressure against recipient states to renounce it.

Directed closely from the National Security Council of the White House, it has the active participation of senators and congressmen associated with the Florida anti-Cuban mafia and frenetic officials of the State Department.

They accuse Cuba of alleged "modern slavery" and "trafficking in persons" who work in the Cuban health system for the purpose of exploitation or alleged meddling by them in the internal affairs of the States in which they are based.

They are also attempting to re-establish the so-called "Parole Program for Cuban Medical Professionals," which existed until January 12, 2017, as the backbone of active management of incitement to desertion, payment of tickets and legal services, provision of U.S. visas and travel documents to aid workers in third countries aimed at sabotaging the bilateral agreements signed with these countries, depriving them of their services and depriving us of highly qualified human resources.

In May 2019, the Secretary General of the Organization of American States(OAS) hosted a conference on the alleged crimes against humanity committed by Cuba in relation to Cuban medical cooperation abroad.

In June, the State Department, in its Report on Trafficking in Persons 2019, denigrated Cuba's international health cooperation and, a month later, imposed visa-restriction sanctions on Cuban officials linked to medical missions.

The U.S. persecution began in Latin America and has forced the termination of cooperation programs in Brazil, Ecuador and Bolivia.

The fascist and servile Brazilian President Jair Bolsonaro vilified and actually expelled our specialist doctors who, under a tripartite agreement with the Pan American Health Organization(PAHO) , from August 2013 to November 2018, treated 113.359.000 patients in more than 3.600 municipalities and permanently assisted 60.000.000 Brazilians.

In our country, 1214 Brazilian students graduated in medicine.

That decision allowed Bolsonaro to be complacent with the U.S. government and to remove a program aimed at low-income families, within a brutal policy of reversing the social gains made during the progressive governments of the Workers' Party.

Senior U.S. officials have used the slander that the Cuban medical brigades in the Bolivarian Republic of Venezuela are military troops, which Bolsonaro repeated like a parrot, in September 2019, during his speech at the UN General Assembly, tripling in a ridiculous manner, out of evil or ignorance, the lying and unfounded figure used by Washington.

Officials from the State Department, the U.S. Agency for International Development (USAID) and U.S. Embassies have approached national authorities, as in Guatemala, to investigate, in a peremptory and suspicious manner, precise data on Cuban medical cooperation in order to find a way to remove it.

In May 2019, the U.S. Embassy in Ecuador asked high-ranking government officials for detailed information on the agreements and services of Cuban aid workers. Five months later, the Ecuadorian government rescinded them, immediately despite their imminent expiration, alleging economic reasons.

Since the beginning of medical collaboration in this country, a total of 3.565 Cuban health professionals have offered their services. There were 6.749.666 medical consultations, 212.360 surgeries, 3.548 births and 100.084 vaccinations. There were 153 workers who participated in " Operacion Milagro ", a program through which 168.543 surgeries were performed. As a result of the "Manuela Espejo" Solidarity Mission, 825.576 people were treated, including 35.257 in specialized neurophysiology and otorhinolaryngology consultations and 21.062 patients received clinical genetic studies.

Besides, 2.093 young Ecuadorians finished their studies in Cuba.

In October, the Ministry of Foreign Affairs of Ecuador requested to know the purpose of the trip to that country of a list of Cuban citizens carrying diplomatic and official passports. Later, the Minister of Government declared injuriously that several Cubans, associated to the cooperation agreements, participated in the protests that the Ecuadorian people carried out against the application of neoliberal measures in that period.

As has been proven, no Cuban was involved in or organizer of these massive popular demonstrations and not a single official or diplomatic passport was improperly used. The manipulators could not present a single piece of evidence.

The Cuban State issues diplomatic, official and service passports, in accordance with the provisions of the Vienna Convention on Diplomatic and Consular Relations, and guarantees that the holders comply with what is established for their proper use.

During the coup d'etat in Bolivia, the United States Embassy in La Paz instigated, conducted and participated directly in hostile actions by police forces and, surprisingly by firefighters, against Cuban aid workers. As was publicly denounced, U.S. officials participated directly in these acts, using the U.S. diplomatic car with license plate 28 CD-17.

During those days, there were 26 serious incidents against our aid workers, including the beating of two of them; the public incitement of coup authorities to violence; brutal searches of their persons, belongings and homes; fake accusations; the arbitrary temporary detention of 50 health workers, four of them for several days.

Faced with this situation, the Cuban government was forced to proceed with the immediate return of our personnel and forcefully rejected the lying statements of the so-called coup-minister of Health who shamelessly exaggerates the amount of stipends of Cuban medical specialists, actually lower than that of Bolivian general doctors; and hides the fact that Cuba did not receive a penny of benefit from this cooperation.

The Cuban Medical Brigade in Bolivia, made up of 54 percent women, was made up of 406 doctors from 32 specialties such as General Integral Medicine, Pediatrics, Internal Medicine, Gynecology and Obstetrics, Anesthesiology and Reanimation, Ophthalmology, General Surgery, Orthopedics and Traumatology, Intensive and Emergency Medicine, Neonatology, among others.

At the same time, 258 graduates in health technologies such as imaging, endoscopy, electromedicine, clinical laboratory technicians, rehabilitators and nursing were also involved.

The persecution and search for information has included attempts to interrogate Cuban personnel by U.S. "diplomats" in the actual health centers where they work abroad, including in North Africa and the Middle East.

It is immoral and unacceptable to question the dignity, professionalism and altruism of the more than 400.000 Cuban health collaborators who, in 56 years, have completed missions in 164 nations.

It is worth mentioning their achievements in the fight against Ebola in Africa, blindness in Latin America and the Caribbean, cholera in Haiti and the participation of 26 brigades of the International Contingent of Doctors Specialized in Disasters and Major Epidemics "Henry Reeve" in Pakistan, Indonesia, Mexico, Ecuador, Peru, Chile and Venezuela, among others.

With the same generosity and dedication, 35.613 health professionals from 138 countries have been trained for free in Cuba.

In the case of nations with more unfavorable economic conditions, Cuba practically assumes the costs of collaboration. Similarly, and in line with United Nations conceptions of cooperation among developing countries, it is offered in other nations based on complementarity and partial compensation for services provided.

The Cuban technicians and professionals who participate in these programs do so absolutely freely and voluntarily. During the accomplishment of their mission, they continue receiving their full salary in Cuba and have, in addition, a stipend in the duty country, along with other benefits.

When Cuba receives compensation for the cooperation provided, these collaborators have the merit of providing a fair and totally legitimate contribution to the financing, sustainability and development of the free and massive health system, accessible to all Cubans, as well as to the cooperation programs that are implemented, without any payment to our country, in many parts of the world.

As we declared last August 29, access to health is a human right. The US quest against international medical cooperation is an infamous and criminal act against people needing medical assistance, which cannot overshadow the solidarity and human contribution of the 29.000 Cuban health professionals who, with the enormous sacrifice and understanding of their families, currently offer services to 65 nations.

The attitude of the Government of the United States in this matter is negligible. Cuba's response is firm: we will continue saving lives and seeking health and well-being for the world, to the limit of our possibilities, wherever requested.