Cuba Ready If US Breaks off Diplomatic Relations: Top Official 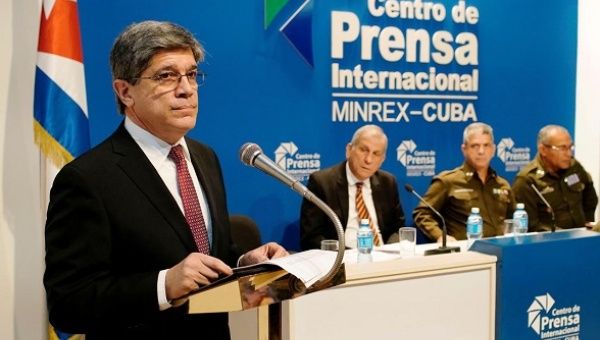 The comments come as this week marks the fifth anniversary of the restoration of diplomatic relations between the two countries.

The Cuban government is prepared for United States President Donald Trump to break off diplomatic relations, although it hopes that this will not occur, a senior Cuban diplomat said Monday.

During an annual academic conference between Cuba and the United States in Havana, Cuban Foreign Ministry’s General Director for the U.S., Carlos Fernandez de Cossio, expressed that "nowadays there are powerful people in the government of the U.S. who want to apply more and more hostile and severe measures in our bilateral relation."

The diplomat added that if that were the case Cuba is "willing to face that reality, but it is not what the people of Cuba want and not what the government of Cuba seeks." The comments come as this week marks the fifth anniversary of the restoration of diplomatic relations between the two countries, after half a century of hostility.

Experts and academics from Cuba and the U.S. dialogued this Monday in Havana to "seek strategies, solutions, and projects that impact the links between the two countries."

Trump's administration has tried to put pressure on Cuba to stop the alleged violations of human rights like the persecution of the opposition and has vigorously campaigned for the release of dissident Jose Daniel Ferrer.

Havana said that the United States does not have the moral authority to lecture anyone on human rights and should not intervene in the internal affairs of other countries.

It was under former Democratic President Barack Obama that the two countries renewed their relations. Washington relaxed restrictions on trade and travel, Obama visited Havana and the old Cold War enemies looked for ways to completely normalize their relationship.

But under the Republican government all that has changed. Washington's aggressiveness is part of the application of its economic, commercial and financial blockade, a policy in force for 60 years, strengthened by U.S. President Donald Trump.

This upsurge has also implied a more intense and punitive application of extraterritorial measures, such as the full activation of Title III of the Helms-Burton Act of 1996.

The article allows U.S. citizens, including Cubans who acquired their nationality, to file lawsuits against foreign companies linked to properties nationalized after the Cuban Revolution in 1959, but it has never been activated. While the Helms-Burton Act's Title IV prohibits entry into U.S territory people being sued under Title III.

The most likely short-term effect is the large-scale withdrawal of foreign investors from Cuba, a country whose economy has around US$2 billion in foreign investments.