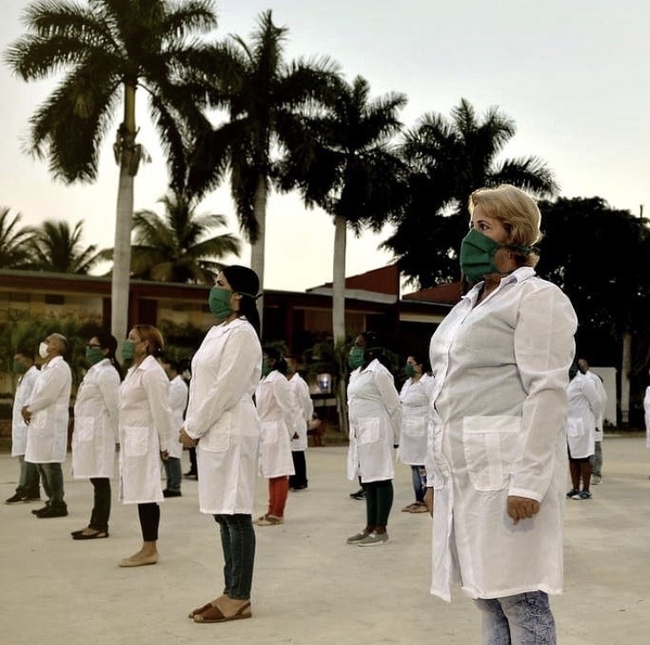 The Cuban Foreign Ministry issued a letter this week that called on the international community to come together to combat the COVID-19 outbreak.

The impact of COVID19 can already be measured and will be assessed in the future by the striking numbers of people infected, the unacceptable numbers of deaths, the unquestionable damages to the world economy, production, trade, employment and personal income of millions of people.

It is a crisis that goes well beyond the scope of health. The pandemic has emerged and spread amidst a scenario previously marked by overwhelming economic and social inequalities within and among nations. With unprecedented migratory and refugee flows, xenophobia and racial discrimination have reemerged. The remarkable advances of science and technology, particularly in the area of health, focus in the pharmaceutical business and commercialization of medicine, rather than in securing the wellbeing and healthy living of majorities.

Covid19 has come into a world overburdened by production and consumption patterns, especially in highly industrialized countries and among the elites of developing countries, that are unsustainable and incompatible with the finite character of natural resources upon which life on the planet depends. Before the first case was identified, there were 820 million people suffering from hunger worldwide; 2.2 billion people with no access to fresh water; 4.2 billion without access to safely managed sanitation services and 3 billion lacking basic amenities for hand washing.

This scenario becomes more inadmissible when it is known that globally around 6.7 billion dollars are spent on a yearly basis only in advertising, while military expenditure amounts to 1.8 trillion dollars that are completely useless in the combat against the COVID19 threat, which has already taken the lives of tens of thousands of people. The virus does not discriminate. It does not distinguish the rich from the poor.

However, its devastating effects multiply there where people that are most vulnerable and get the lowest incomes live, in the poor and developing world, in the pockets of poverty of large industrialized cities. Its impact is specially felt where neoliberal policies and social spending cuts have limited public administration capacities of the State.

Covid19 has taken more lives where governmental public healthcare budgets have been cut. It has caused more economic damages where the State has little or no options to bail out those who lose their jobs, close their businesses and suffer the dramatic reduction or loss of their personal and family income source. In most developed countries the death toll is higher among the poor, migrants and, in the specific case of the United States, among African Americans and Latinos.

To top it all off, the international community has to deal with this global threat while the biggest military, economic, technological and communicational power of the world implements a foreign policy that seeks to incite and promote conflicts, divisions, chauvinism and supremacist and racist positions.

At times when the worldwide combat against the Covid19 pandemic requires boosting cooperation and the leading role of international organizations, particularly the United Nations (UN) and the World Health Organization (WHO), the current US administration attacks multilateralism and seeks to disqualify the established leadership of WHO.

It also insists in its petty strategy of taking advantage of the circumstances to impose its dominance and attack countries whose governments it has discrepancies with. Some examples serve to illustrate that, like the recent and serious military threats against the Bolivarian Republic of Venezuela and the announcement, the day before yesterday by the US president, of the Pan-American Day and Week from April 14 to 18, accompanied by Monroe-Doctrine-inspired neocolonial statements against Venezuela, Nicaragua and Cuba, reminiscing of the Pan-American Conference, condemned 130 years ago by José Martí. Around those same days; but in 1961, the Bay of Pigs invasion took place. Another example is the immoral and persistent attack against Cuba’s selfless efforts to assist countries that have requested cooperation in the fight against COVID19.

Instead of promoting cooperation and a collective response, top officials of the US State Department devote their time to issue statements threatening governments that faced with the drama of the pandemic exercise their sovereignty and decide to request Cuba’s assistance. The United States officials are knowingly committing a crime, when in the midst of a pandemic they attack Cuba’s international cooperation, seeking to deprive millions of people from their universal human right to healthcare services. The magnitude of the current crisis compels us to cooperate and practice solidarity despite political differences. The virus knows no boundaries or ideologies. It threatens the lives of all and therefore it is up to all of us to fight against it.

No country should assume it is big enough, rich enough or powerful enough to defend itself, isolating itself and ignoring the efforts and needs of others. Sharing and providing valuable and reliable information is urgent. Steps have to be taken to allow for the coordination of the production and distribution of medical equipment, personal protection equipment (PPE) and medicines, with a sense of justice. Countries with more available resources should share them with most affected countries that are least prepared to cope with the pandemic.

That is Cuba’s approach. The humble contribution of a small nation with limited natural resources and submitted to a long and brutal economic blockade. For decades we have accumulated experiences in the development of international cooperation in the area of health, as generously acknowledged by the World Health Organization and our counterparts. In the last few weeks, we have responded to cooperation requests without hesitance to consider political coincidences or economic advantages.

So far, 21 brigades of healthcare professionals have been deployed to join in the national and local efforts of 20 countries, that are added or strengthen existing medical collaboration brigades in 60 nations that have now joined efforts to combat COVID 19 in the countries where they were already providing services. We have also shared some medicines produced by Cuba that according to our practice have proven effective in the prevention of or therapy against the disease. In addition, our healthcare personnel has taken part from Cuba and via teleconferences in consults and discussions on specific treatments for patients or groups of patients in several countries.

All these actions are undertaken without neglecting the responsibility of protecting the Cuban population, duty that is rigorously fulfilled despite the huge limitations imposed by the US economic, commercial and financial blockade. Those who are interested may find the data supporting this assertion as they are publicly available. Anyone with a shred of decency will understand that the blockade poses remarkable pressure over Cuba to ensure the material inputs and equipment that support the public healthcare system and those specifically required to address this pandemic.

A recent example was an aid cargo from China that could not be shipped to Cuba because the carrier claimed the US blockade banned it. On that matter, top US State Department officials had the nerve to say that the United States does export medicines and medical devices to Cuba. Nonetheless, they have failed to support those fallacies with a single transaction between the two countries. It is common knowledge and widely substantiated that the economic blockade is the main obstacle for Cuba’s development, prosperity and for the wellbeing of Cubans.

That harsh reality due solely to the obstinate and aggressive behavior of the United States government does not prevent us from providing our help and solidarity. We don’t deny anyone our assistance, not even to the country that causes Cuba so much harm, if necessary. Cuba is convinced that these times require cooperation and solidarity. Cuba pursues a politically unbiased international endeavor that seeks to develop and share the scientific research results and experiences of several countries in the prevention of the disease, the protection of the most vulnerable and social behavior practices that will contribute to shorten the duration of the pandemic and slowdown the loss of lives. Cuba strongly believes the role and leadership of the United Nations and the World Health Organization are indispensable. If we act together, the propagation of the virus will be halted, in a faster and more cost-effective manner.

Then we will have to deal with the economic and social crisis the pandemic is causing, the dimensions of which nobody has dared predict yet. However, we cannot wait for that day to come to join efforts to overcome the huge problems and threats we shall find ahead and deal with those that were piling up before the pandemic took the first lives. If developing countries are not guaranteed access to technologies that are mostly available in highly industrialized nations, especially in the area of health, and if they fail to share science developments and their products in an unimpeded and selfless manner, the vast majority of the world’s population will be as exposed or even more exposed than today in an increasingly interconnected world.

If politically motivated coercive economic measures against developing countries are not lifted and if they are not exempted from the payment of the burdensome and unpayable foreign debt and freed from the ruthless tutelage of international financial organizations, we cannot delude ourselves into thinking that we will be in a better position to respond to the economic and social disparities that, even without a pandemic, kill millions of people every year, including children, women and elders. The threat against international peace and security is real and constant attacks against some countries only made it worse. It can hardly be expected that the eventual end of the pandemic will lead to a more just, secure and decent world if the international community, represented by each country’s governments, does not press forward to agree and adopt decisions that have proven stubbornly elusive so far. Similarly, questions will arise as to how well prepared is humanity to face the next pandemic.

There is still time to act and mobilize the will of those who are responsible. If we leave it up to future generations, it may be too late."