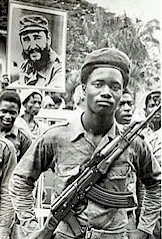 To mark the 45th anniversary of Operation Carlota, we republish this article by Matt Pepe, first published in Counterpunch in 2015.

After 40 years, Republic of Guinea native Alpha Diallo still remembers the emotion he felt as a 20-year-old college student in Cuba when he made a decision that would change his life. The Cuban government had just decided to send troops to Angola to fight the invading South African army, which had crossed the border into Angola several weeks earlier on Oct. 23, 1975. Diallo, who had come from western Africa to Havana on scholarship two years earlier to study agricultural engineering, attended a rally of 800,000 people in the Plaza of the Revolution as Fidel Castro announced the military mission to support the anti-colonial Angolan movement and fight apartheid.

“I followed Fidel’s speech and it was compelling. Among the Guineans, 15 of us decided to give up our studies to go fight,” Diallo recalled recently in a phone interview from his home in Washington D.C. “We were so impressed and we were excited to go.”

Diallo said that as Africans, he and the other students felt a special obligation to help the Cubans fight for the liberation of other African countries. Since the early 1960s, Cuba had provided crucial support to movements throughout Africa seeking to free themselves from colonialism.

In Guinea-Bissau, Cuba had provided military instructors and doctors, enabling the rebels to gain their independence from Portugal two years earlier. After the Portuguese dictatorship fell in 1974 and Portugal prepared to grant Angola independence on Nov. 11, 1975, three local movements fought to take power.

The largest rebel group with the most popular support was the People’s Movement for the Liberation of Angola (MPLA). They had gained a decisive advantage internally and were poised to take control of the government. The MPLA was providing critical training and safe haven to other anti-colonial rebel groups opposed to minority rule from neighboring countries such as (Nelson Mandela’s) ANC of South Africa, SWAPO of Namibia, and FRELIMO of Mozambique.

By early November, the South African Defence Force (SADF) was advancing 45 miles per day toward the capital Luanda. South Africa’s invasion jeopardized not only Angola’s revolution, but the struggle for liberation throughout the continent. The racists were set to install a puppet regime led by former Portuguese collaborator Jonas Savimbi that would be amendable to white rule in South Africa and willing to work with apartheid to crush the liberation movements. The situation in Angola was bleak.

“The MPLA leaders, who had been prepared for a guerilla struggle rather than a full-scale war, then understood that only an urgent appeal for international solidarity would enable them to rout this concerted attack by neighboring states, supported by the most rapacious and destructive resources of imperialism,” wrote Colombian author Gabriel García Marquez in 1977.

The Angolans had only one unlikely country they could turn to: Cuba. The poor Caribbean country, suffering under a vicious economic war waged on them for 15 years by the world’s most dominant superpower, had already provided military instructors to assist the MPLA. But they would not be nearly enough on their own. MPLA leader Agostinho Neto would appeal to Fidel Castro on Nov. 3 for reinforcements to ward off the racists.

The answer came less than 48 hours later on Nov. 5. Yes. “The Communist Party of Cuba reached its decision without wavering,” García Marquez wrote. He noted the date had historical significance for Cubans: “On another such November 5, in 1843, a slave called Black Carlota, working on the Triunvirato plantation in the Matanzas region, had taken up her machete at the head of a slave rebellion in which she lost her life. It was in homage to her that the solidarity action in Angola bore her name: Operation Carlota.”

On Nov. 7, the first 82 soldiers, dressed in civilian clothes and carrying light artillery, set off on a Cubana Airlines flight to Luanda. Over the coming weeks and months, Cuban troops would pour into Angola by air and by sea. By the end of the year, they would number nearly 10,000 . More than a decade later, before the end of apartheid, there would be as many as 36,000 troops throughout the country.

Fidel Castro, Commander of the Cuban Revolution, would immerse himself in the battle.

“There was not a single dot on the map of Angola that he was unable to identify, nor any feature of the land that he did not know by heart. His absorption in the war was so intense and meticulous that he could quote any statistic relating to Angola as if it were Cuba itself, and he spoke of its towns, customs and peoples as if he had lived there all his life,” writes García Marquez. “In the early stages of the war, when the situation was urgent, Fidel Castro would spend up to fourteen hours at a stretch in the command room of the general staff, at times without eating or sleeping, as if he were on the battlefield himself. He followed the course of battles with pins on minutely detailed wall-sized maps, keeping in constant touch with the MPLA high command on a battlefield where the time was six hours later.”

After landing in Angola, Cuban troops went straight to the battlefield and proved decisive in keeping the racist South Africans at bay. On Nov. 10, Cuban troops ambushed the SADF’s Zulu column, inflicting heavy casualties on the apartheid army.

At the Battle of Ebo on Nov. 23, Cuban soldiers attacked the Zulu column as it approached a bridge, according to historian Piero Gleijeses. They killed and wounded as many as 90 racist troops and knocked out seven or eight armored cars. The victory bought Cuba time as reinforcements poured in, and Angola received a shipment of weapons from the Soviet Union. The apartheid army tried to advance, but were pushed back by heavy resistance. By Dec. 27, they were ordered to fall back.

In a June 1975 meeting of the National Security Council, Secretary of State Henry Kissinger told President President Ford he was not “in wild agreement” with the options presented by an interagency task force: “The first is neutrality – stay out and let nature take its course… As for the second course, my Department agrees, but I don’t. It is recommended that we launch a diplomatic offensive … and encourage cooperation among the groups.” The absence of American intervention, Kissinger admitted, would lead to a victory for the MPLA and for Neto to “gradually gain the support of other Africans.” [2]

Secretary of Defense James Schlesinger offered: “We might wish to encourage the disintegration of Angola. Cabinda in the clutches of (Congolese military dictator) Mobutu would mean far greater security of the petroleum resources.” Ford was in agreement that the United States must prevent Angolan self-determination: “It seems to me that doing nothing is unacceptable.” [3]

The most damning evidence, though, was admitted publicly by apartheid South African Prime Minister P.W. Botha in the House of Assembly in 1978. Botha declared that when the SADF invaded Angola: “we did so with the approval and knowledge of the Americans.” [4]

By the end of 1975, Cuban troops had routed the apartheid army and prevented their takeover of the country. There is no doubt that had Castro and the Cuban government declined to confront the apartheid regime on the battlefield, the MPLA would have fallen. A South African victory would have solidified apartheid and devastated the decolonization movements across southern Africa.

“Without the Cuban intervention, the South Africans would have seized Luanda before anyone reported that they had crossed the border. The CIA covert operation in Angola would have succeeded,” Gleijeses writes. [5]

Diallo and his fellow countrymen in Cuba would not, in the end, join the fight against apartheid. When the Cuban government found out that the African students wished to take part in the military mission, they informed them through the university that they should stay in Cuba.

Even though he had never been to South Africa, Diallo said he understood the injustices black South Africans faced under the apartheid system. “I was aware of that, the humiliation of people telling you that you weren’t as good, telling you where you could live and restricting your ability to move around,” he said. Ridding Africa of apartheid, what Castro himself called “the most beautiful cause,” was worth fighting for. [6]

But Diallo is glad the Cubans made it clear that the students should serve in a civic capacity, rather than a military one. “They told us: ‘Your country needs you. We appreciate your offer, but let us handle this. Stay here and finish your studies and then go back and help your own countries,’ ” Diallo said. 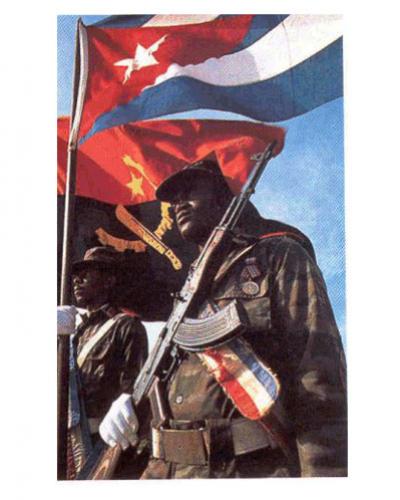