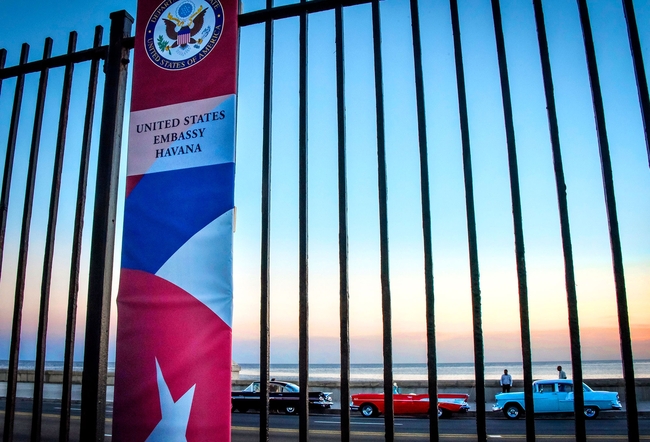 More than four years after personnel at the U.S. Embassy in Havana began reporting sudden, debilitating illnesses, with severe headaches, hearing loss and other brain injuries, there are still no definitive answers as to what caused the outbreak.

The Trump administration did not reveal the incidents until they appeared in news reports many months later. Despite the State Department’s initial reticence to assign blame, President Donald Trump quickly labeled the Cuban government guilty of “attacks” on the diplomats, charges that were used to buttress his administration’s reversal of much of the Obama era’s normalization with Cuba.

Cuban diplomats in Washington were expelled; the recently reopened American embassy in Havana was shrunk to a skeleton staff, with the consulate virtually closed. Most categories of U.S. travel eventually were banned, and remittances by Cuban Americans were slashed.

But a long-classified assessment ordered by the State Department indicates that what it characterized as the Trump administration’s slow and chaotic response to the incidents increased the likelihood that it may never be known who or what was responsible.

The June 2018 report by the Accountability Review Board found “serious deficiencies in the Department’s response in areas of accountability, interagency coordination, and communication, at all levels,” that “contributed to the confusion surrounding the events, and delayed effective, coordinated action.”

The lack of answers could weigh on President Biden’s plans for U.S. relations with Cuba. Although the new administration appears to be in no hurry to move, Biden said in September as a candidate that he would “try to reverse the failed Trump policies. They inflicted harm on Cubans and their families” and have “done nothing to advance democracy and human rights.”

Scientists can’t explain why diplomats in Cuba are suffering from ‘traumatic brain injury’
The 35-page ARB document, with heavily redacted appendixes, was obtained under the Freedom of Information Act by the National Security Archive, a Washington-based, nonprofit research organization, which provided it to The Washington Post.

Outlining many problems, the report cited the administration’s failure to nominate officials to senior-level slots — including an undersecretary of state for management, a position unfilled until May 2019 — along with its practice of leaving “acting” officials with uncertain authority in other positions. “No senior official,” it said, “was ever designated as having overall responsibility,” a situation the board found to be “the single most significant deficiency in the department’s response.”

“As a result, a whole-of-government comprehensive effort to identify the mechanism of injury and perpetrators, to understand the universe of potentially affected individuals, to treat and rehabilitate the injured employees . . . never emerged,” it said.

No task force was ever formed, and communication was lacking between the department’s upper echelon and everyone underneath it. At the same time, the report said, “both at [Havana] Post and in Washington, response to the incidents was characterized by excessive secrecy that contributed to a delayed response.”

“Many communications related to the incidents did not travel in the usual Department of State channels, and therefore there may be documentation that has not been made available,” the board said.

A 60 percent reduction in U.S. Embassy staff ordered in September 2017 by Secretary of State Rex Tillerson “does not appear to have followed standard Department of State procedures and was neither preceded nor followed by any formal analysis of the risks and benefits of continued physical presence of U.S. government employees in Havana,” although such an assessment is required by Foreign Service rules, the report said.

“No one can explain why this has not happened,” it said. A department-compiled timeline included in the document noted the embassy drawdown announcement came about two weeks after the CIA withdrew its personnel from Havana.

The Cuban government has repeatedly denied any knowledge of what might have caused the illnesses.

The convening of the board itself, headed by veteran diplomat Peter Bodde, was delayed for nearly a year, despite being legally required within 60 days of a security-related incident. By the time it completed its report, Tillerson had been fired for running afoul of Trump on other matters.
His replacement, former CIA director Mike Pompeo, sent a redacted version to Congress more than two months after receiving the classified, “Secret” document. At the same time, Pompeo publicly released a two-page fact sheet, saying the investigation had found that the department’s “security systems and procedures were overall adequate and properly implemented” and citing “challenges with information sharing and communication.” It said the department was addressing a number of board recommendations.

Pompeo clings to Trump’s legacy with an eye toward inheriting the MAGA base
“The ARB did not find any U.S. government employee engaged in misconduct or performed unsatisfactorily in a way that contributed to these incidents,” the fact sheet said.

But while technically correct — the full ARB report did not indicate any U.S. official caused or contributed to the still unexplained incidents themselves — the report unequivocally concluded that administration actions, including its failure to organize timely and comprehensive care for those affected, and to make pertinent information available to investigators, undermined its response.

Similar conclusions were drawn by subsequent assessments of various aspects of the response by the Government Accountability Office, the Centers for Disease Control and Prevention, and the National Academies of Sciences, Engineering and Medicine.

At least 24 U.S. personnel initially reported a variety of symptoms. “For some,” the National Academies reported in December, “their case began with the sudden onset of a loud noise, perceived to have directional features, and accompanied by pain in one or both ears or across a broad region of the head, and in some cases, a sensation of head pressure or vibration, dizziness, followed in some cases by tinnitus, visual problems, vertigo and cognitive difficulties.”

But others reporting similar long-term symptoms recalled no specific event. Problems in defining an illness were further complicated by the fact that different patients had been evaluated by different clinicians over a period of a year, using different tests and drawing differing conclusions. Only the CDC was permitted to review all patient records — although not to interview all the affected individuals — and it did not receive the records until nearly a year after the State Department requested it investigate in late 2017.

According to the CDC report, not made public until last month after the National Security Archives and BuzzFeed obtained copies, 15 of the 95 people whose medical records it evaluated met the criteria of defined symptoms, with 31 others defined as “possible cases.”

“As of December 2018,” it said, “among the 15 presumptive cases, 9 (60 %) reported improvement and none reported worsening in their clinical course.” Forty-nine potential cases were ruled out from what had become known as “Havana Syndrome.”

Speculation on the exact cause of the Havana events, as well as similar incidents reported in China and Russia, has varied widely.

The symptoms have been attributed to intentional sonic attacks, pesticide, Cuban crickets, infectious diseases and psychological factors. Although cautioning that “evidence has been lacking, no hypothesis has been proven, and the circumstances remain unclear,” the National Academies found the symptoms “consistent with the effects of directed, pulsed radio frequency energy.”

Pompeo was asked in late October about possible political motivations for the administration’s reaction — including a soft-pedaling of reports from China, whose leadership Trump was courting at the time, compared to the sharp response to Cuba. He called such suggestions “patently false, clearly false, unambiguously false.”

He said he had nothing new to add to questions surrounding the cases. “It’s a very complicated situation, and there is not yet any complete U.S. government analysis which definitively tells us precisely how these all came to be,” Pompeo told reporters. “We have — there are multiple theories, and you should know there are significant U.S. government resources now, what, three-plus years on, devoted to getting to the bottom of this and then holding those responsible accountable, should that be required.”