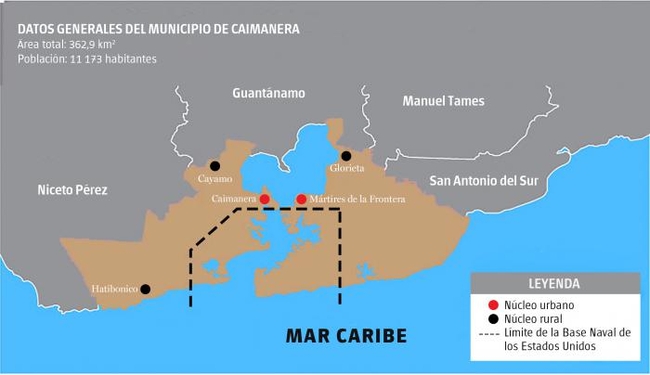 The return of the land occupied by the Naval Base has been a permanent claim of the Cuban Revolution since 1959, and has the support, not only of the Cuban people, but of the international community. It is a thorn in the heart of the country

The administration of President Joe Biden intends to close the US jail at the illegal Naval Base in Guantánamo (BNG), before the end of his term, according to reports confirmed by Jen Psaki, White House press secretary, reported by news media from Washington.

The closure of the prison was one of the unfulfilled promises of former President Barack Obama (2009-2017), a center inaugurated at the beginning of 2002, which came to retain, outside the judicial system, some 780 inmates at the beginning, generating worldwide outrage for the torture and mutilation that took place there.

It represents a symbol of the excess of the US government in its supposed response to international terrorism, after the attacks of September 11, 2001 against the Twin Towers in New York and the Pentagon building.

Today only 40 prisoners remain in that enclave, while a month ago a group of UN human rights experts called for the closure of the prison.

According to a statement published by eight special rapporteurs of that highest world authority, "this is a place of arbitrariness and abuse," and it should have been closed a long time ago, Prensa Latina said.

HISTORY OF A TAX AND BETRAYAL
It was on February 16, 1903, when the then President of Cuba, Tomás Estrada Palma, betrayed the ideals of José Martí and the Cuban Revolutionary Party (PRC), which he helped found, by signing the cession of the territory of Caimanera to the United States. To establish a naval base against the popular will.

The area itself has 117.6 square kilometers and has been usurped from Cuba for more than a century.

The meddling agreement for the establishment of coal and naval stations on the island was signed by then-president William McKinley in March 1901, and became known as the Platt Amendment, while the country was occupied by the US army.

The Platt Amendment was an appendix of eight articles to the draft of the Yankee Army Budget Law, approved by the United States Congress, and imposed on the first Constitution of the Republic of Cuba, prepared by the Constituent Assembly of 1901, under the threat of that, if he did not accept it, Cuba would continue to be occupied militarily.

Article VII established the transfer of portions of Cuban soil dedicated to naval stations "to enable the United States to maintain the independence of Cuba and protect the people from it, as well as for its own defense."

Even more insulting was Article III, which granted "the United States the right to intervene militarily on the Island when life, property or individual liberties were endangered (in its opinion)," and warned the mediated government that the power could " exercise the right to intervene for the preservation of Cuban Independence, the maintenance of an adequate Government for the protection of lives, property and individual liberty and to fulfill the obligations that with respect to Cuba have been imposed on the United States by the Treaty of Paris and that must now be assumed and fulfilled by the Government of Cuba.

In their Article VI, they took advantage of the geographical error of the Treaty of Paris, by referring to Cuba as an island and not as an archipelago, to provide that the status of Isla de Pinos (current special municipality of Isla de la Juventud) would be determined in the future agreement with the United States.

Estrada Palma, after the death in combat of Martí, remained as Delegate of the PRC, and later he was appointed agent abroad of the Republic in Arms in the Assembly of Jimaguayú. It remained in the territory of its neighbor to the north until long after the island was occupied by the US army. In this period, one of its few public actions was the unilateral, irresponsible and unconsulted decision to dissolve the PRC, in December 1898, considering the objectives that led to its creation have been met.

He was president of the Republic of Cuba from 1902 to 1906 in the first elections held in the Republic under North American supervision, and he governed with extreme austerity, but with absolute servility to the interests of Washington.

Near the end of his term, he decided to aspire to re-election, for which he used the force of power and fraud, which motivated the followers of the opposition Liberal Party to take up arms. When he realized that the popular revolt threatened to overthrow him, he preferred to request the Yankee military intervention. Shortly after, he resigned the presidency to facilitate the delivery of the country to the Americans, who occupied Cuba for the second time.

The return of the land occupied by the Naval Base has been a permanent claim of the Cuban Revolution since 1959, and has the support, not only of the Cuban people, but of the international community. It is a thorn in the heart of the country.