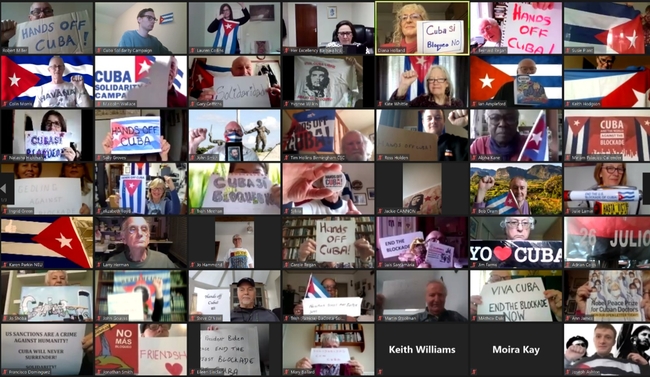 More than 140 members of the Cuba Solidarity Campaign joined the All Members Forum on 20 March. Participants heard from Miami Five hero and president of ICAP, Fernando Gonzalez, who recorded a special video message for the event which set out the challenges faced by Cuba at the present time. He spoke of the need to focus our efforts of the campaigns against the US blockade and the upcoming vote on Cuba’s resolution at the United Nations General Assembly.

Her Excellency Barbara Montalvo,Cuban Ambassador, thanked CSC members and affiliates and introduced a special award video where CSC was presented with the prestigious 60th anniversary medal from ICAP. It was an emotional moment from many in the meeting. The medal was a fitting recognition for so many activists who have worked so tirelessly for many years campaigning in solidarity with Cuba.

Kevin Courtney, National Education Union Joint General Secretary and International spokesperson for the TUC said he was honoured to be part of the international solidarity movement. He spoke of the deep commitment of trade unionists here to stand shoulder to shoulder with their Cuban brothers and sisters.

The meeting heard a presentation from specialists Professor Susan Michie and Dr Lauren Collins on Cuba’s fight against coronavirus at home and abroad, which Professor Michie compared to the response in the UK.

There were also updates on CSC’s campaigns and fundraising as well as the organisations membership and finances through the challenging past year of the pandemic. CSC is currently lobbying Members of Parliament to sign Early Day Motion 1550 - Cuba and the US blockade that already has the support of 36 MPs. The campaign is also organisaing a series of online meetings to explore the history and impact of the US blocakde in detail before the 2021 UN vote. On Monday 29 March, Pedro Luis Pedroso Cuesta, Cubas ambassador to the United Nations will join us live from the UN headquarters in New York.

Participants took part in an online protest against the US blockade of Cuba holding up banners and flags to illustrate their opposition to the cruel and illegal policy which is appraoching its 60th year.. The protest was part of the International Caravan against the Blockade which takes place on 27/28 March.

You can watch the All Members Forum Here