Against the odds, Cuba could become a coronavirus vaccine powerhouse 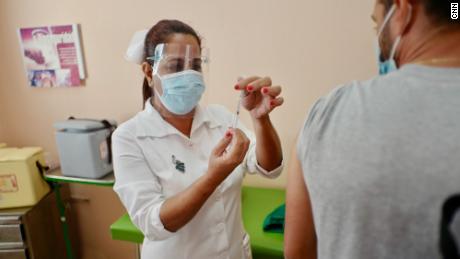 Cuban leader Fidel Castro vowed to build a biotech juggernaut in the Caribbean, advancing the idea in the early 1980s with six researchers in a tiny Havana lab.

Forty years later, the communist island nation could be on the cusp of a singular breakthrough: Becoming the world’s smallest country to develop not just one, but multiple coronavirus vaccines.

Five vaccine candidates are in development, two in late-stage trials with the goal of a broader rollout by May. Should they prove successful, the vaccines would be an against-the-odds feat of medical prowess — as well as a public relations coup — for an isolated country of 11 million that was added back to the U.S. list of state sponsors of terrorism in the final days of the Trump administration.

Cuban officials say they’re developing cheap and easy-to-store serums. They are able to last at room temperature for weeks, and in long-term storage as high as 46.4 degrees, potentially making them a viable option for low-income, tropical countries that have been pushed aside by bigger, wealthier nations in the international scrum for coronavirus vaccines.
AD

They could also make Cuba the pharmacist for nations lumped by Washington into the “Axis of Evil” and “Troika of Tyranny.” Iran and Venezuela have inked vaccine deals with Havana. Iran has agreed to host a Phase 3 trial of one of Cuba’s most promising candidates — Soberana 2 — as part of a technology transfer agreement that could see millions of doses manufactured in Iran.

“We have great confidence in Cuban medical science and biotechnology,” Venezuelan Foreign Minister Jorge Arreaza told The Washington Post this week. “It will not only be fundamental for Venezuela, but for the Americas. It will be the true solution for our people.”

That could bring prestige to a government under fire for a crackdown in recent months on free-speech protests led by artists, poets and gay rights activists, known as the San Isidro movement.

“In the public eye, it would soften the image of a country that’s being accused of doing some pretty bad things,” said Eric Farnsworth, a critic of the Cuban government and vice president of the Council of the Americas and the Americas Society. “It undermines the message that Cuba is a broadly authoritarian country that can’t produce anything good.”

If Phase 3 trials are positive, Cuban authorities said this week, they would move to a vast “intervention study” that would inoculate almost all the residents of Havana, or 1.7 million people, by May. By August, they would aim to reach 60 percent of the national population, with the rest getting doses by year’s end.

If reached, that ambitious target could rank Cuba — a country where the average scientific researcher earns about $250 a month — among the first nations in the world to reach herd immunity, putting it in a position to lure vaccine tourists and to export surpluses of what officials claim could reach 100 million doses by year’s end.

“The main contribution will be to immunize the entire Cuban population and control the transmission of the virus,” Eduardo Martínez Díaz, president of BioCubaFarma, the state conglomerate overseeing Cuba’s vaccine development, said in a written response to questions from The Washington Post last week. “The country will be able to return to normality and it will be safe for those who want and decide to visit the island.”

For Cuba, it would happen at a critical time. Following relatively low infection rates last year, the island’s coronavirus numbers have been spiking in recent weeks, making it one of several new hot spots in hard-hit Latin America. But some critics warn the government might be moving too fast, pushing an experimental vaccine on a broad populace in an effort to quickly regain lost tourist dollars.

“This is not a proven vaccine,” warned Norges Rodríguez, co-founder of YucaByte, a website on Cuban affairs. “They are using the people to try this out, and then have tourists come and get it. It’s very odd they want to do this on such a large scale so soon.”

As sanctions bite in Cuba, the U.S. — once a driver of hope — is now a source of pain
Cuba is an authoritarian, one-party state with strict curbs on free speech, political activism and economic freedoms. But investments in education and health care planted the seed of what is today an unusually sophisticated biotechnology apparatus for a small developing country, with at least 31 research companies and 62 factories with over 20,000 workers.

Cuba expanded its ambitions in the early 1980s, when Castro — known for devouring bimonthly briefings on the New England Journal of Medicine — became intrigued by the notion of producing interferon to fight an outbreak of dengue fever. Today, Cuba produces eight of the 11 vaccines mandated domestically, and it exports them to more than 30 nations. In 2017, clinical trials of Cuba’s Cimavax immunotherapy treatment against lung cancer launched at the Roswell Park Comprehensive Cancer Center in New York.

“Even by Western standards, there are some really nice labs in Cuba,” said former Cuban lab researcher Amilcar Pérez Riverol, now a fellow at the São Paulo State University in Brazil. “The problem is always other things. Like Internet connections.Problems with parts and equipment.”

Cuba’s most advanced coronavirus vaccine candidates — Soberana 2 and Abdala — require two to three doses. “The levels of immunity that both vaccines are generating are high,” Martínez said. He said Cuban scientists were in the midst of preparing clinical data on their vaccines for international release.

Jarbas Barbosa, assistant director of the Pan American Health Organization, suggested this week that it could take up to six months for World Health Organization approval of the Cuban vaccine candidates — that is, if they prove effective.

“We welcome all the developments of vaccines, but all vaccines in the world … need to achieve the same criteria to ensure quality, safety and efficacy,” he told reporters.

Should Cuba’s vaccines succeed, its researchers will have overcome even more hurdles than their peers in Western labs — including shortages of equipment, spare parts and other supplies, due in part to U.S. sanctions. Franco Cavalli, president of MediCuba Europe, a cluster of nonprofit organizations that assist Cuba’s biotech research, said the group provided Havana last year with a $500,000 piece of equipment it needed to assess coronavirus vaccine effectiveness.

“There are times when even we have problems buying anything for them as soon as we tell [suppliers] it’s for Cuba,” Cavalli said. “Even in Europe, after Trump, anything we tried to do for Cuba got harder.”

A successful vaccine could become a vital new source of revenue for Cuba, which has been suffering a brutal economic crisis that has citizens waiting hours in line to buy scarce food, soap and toothpaste. The economy worsened under Trump-era sanctions that tightened the long-standing U.S. economic embargo of Cuba by curbing remittances, scaling back U.S. flights, ending cruise ship passenger traffic and further complicating Cuba’s access to the global financial system. President Biden has called for renewed detente, but he has made no such moves yet.
Biden wants to re-thaw relations with Cuba

A coronavirus vaccine could also prove a literal shot in the arm for other nations under U.S. sanctions, particularly Venezuela and Iran. Iran’s supreme leader announced in January that he had banned the import of U.S.- and British-made coronavirus vaccines, calling them “completely untrustworthy.” Iranian officials nevertheless ordered more than 4 million doses of AstraZeneca’s vaccine, while omitting mention of the vaccine’s British ties in public announcements. British-Swedish pharmaceutical firm AstraZeneca jointly developed its coronavirus vaccine with Oxford University.

Days later, Cuba and Iran jointly announced that Havana’s top vaccine candidate would be tested on 55,000 Iranian volunteers as part of a wider agreement to scale up immunization in both countries. A spokesman for Iran’s health ministry said the agreement would allow technology transfer to Iran and joint production of doses. Iranian health officials have suggested as many as 40 million doses could result.

Asked about Cuba’s vaccine alliance with Iran, the U.S. State Department said in a statement, “the United States supports the rapid rollout of any effective vaccine that meets standards of efficacy, safety, and manufacturing quality as part of national and global strategies to combat the pandemic,” but it cautioned that “robust regulatory and scientific reviews are critical to the confidence of the global community.”

Cuba has suggested it will provide its vaccines free or at cost to poorer nations. But it could charge a premium to others, making money in a manner similar to the profits it reaps from its medical brigades, or emergency teams of doctors and nurses experienced in combating global outbreaks and dispatched in large numbers last year to aid hard-hit countries in the coronavirus fight.

U.S. allies, encouraged by Washington, said goodbye to their Cuban doctors
Ronald Sanders, ambassador of Antigua and Barbuda to the United States, says Western vaccines have been priced out of the reach of smaller nations, and Covax, the multilateral effort to develop and distribute coronavirus vaccine doses, hasn’t moved fast enough.

“We would do a bilateral arrangement with Cuba,” he said. “Europe, the U.S. and Canada bought up the all the vaccines already. So if Cuba does pass its trials, and the WHO does approve it, yes, we will be in line for it, and gratefully so. And I would be surprised if the Cubans charged us more than cost and a minor amount of money.”

Having a population almost fully vaccinated — and offering doses to foreign visitors — could also help Cuba offset a dramatic drop in tourism receipts during the pandemic. A vaccine triumph could also elevate Havana’s diplomatic clout, engendering goodwill with nations that receive its vaccines.

The names of its most advanced vaccines — Soberana 2 suggesting Cuban sovereignty, Abdala taken from a poem by the Cuban independence hero José Martí — appear intended to stir Cuban hearts and minds.

“Cuba thinks that this vaccine will give them political credit,” said Michel Matos, a member of the San Isidro movement. “If anything, this will serve as [more] propaganda.”