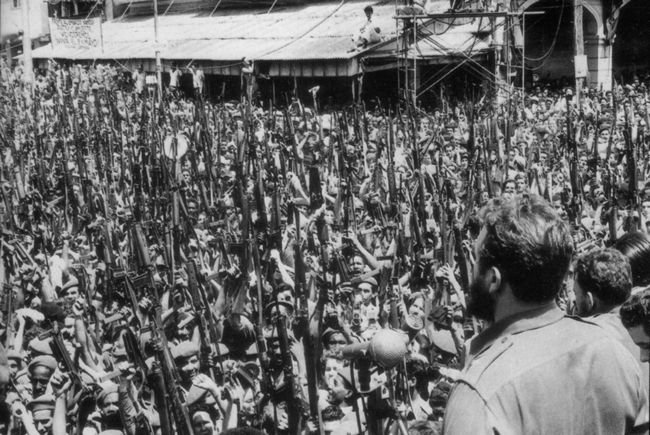 Following the attack on Cuban airfields on 15 April 1961 to prepare the way for the Bay of Pigs invasion two days later, Fidel Castro’s gave a speech on 16 April to honor the seven Cubans killed during the attack. During the speech he talked publicly for the first time of the socialist character of the Cuban Revolution.

Read the full speech below, and register for our meeting on 22 April to mark the 60th anniversary.
https://bit.ly/Giron60

This is what they cannot forgive: the fact that we are here right under their very noses. And that we have carried out a socialist revolution right under the nose of the United States!

Workers and peasants, humble men and women of our country: Do you swear to defend this revolution of the humble, by the humble, and for the humble, to the last drop of your blood?

Compañero workers and peasants of our country: Yesterday’s attack was a prelude to a mercenary aggression. Yesterday’s attack, which cost seven heroic lives, aimed to destroy our planes on the ground. But it failed. They only destroyed two planes while most of the enemy planes were damaged or shot down. Here, before the tomb of our fallen compañeros; here next to the remains of the heroic young people, children of workers, children of the humble, we reaffirm our resolve that just as they exposed themselves to the bullets, just as they gave their lives, we too, all of us, proud of our revolution, proud of defending this revolution of the humble, by the humble and for the humbler shall not hesitate, whenever the mercenaries come, no matter who is against us, to defend it to our last drop of blood.