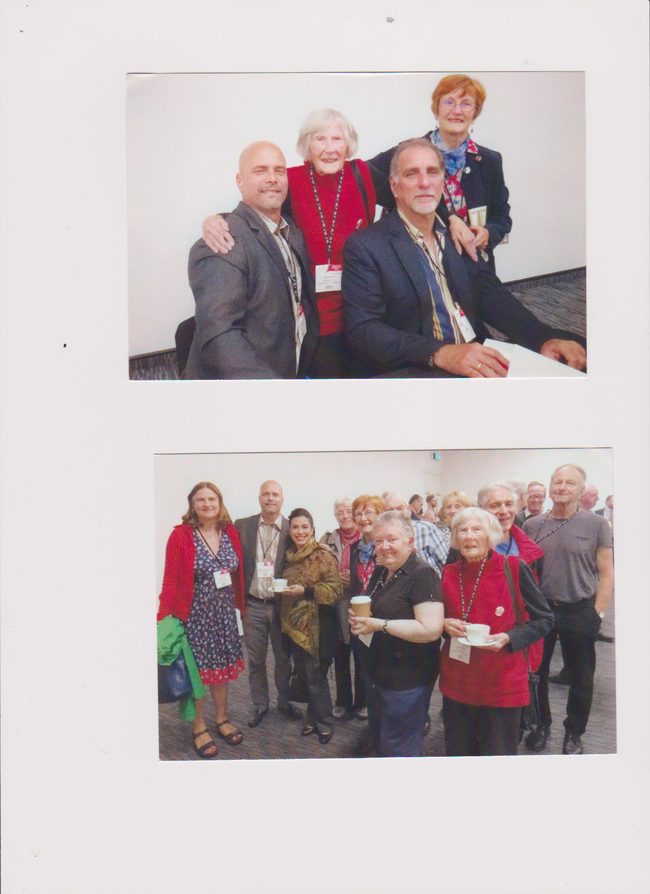 My wonderful mother, Con Fraser, sadly died at 10.25pm on the evening of Friday 26th March 2021, at the age of 99. She left us peacefully, in no apparent pain or discomfort. I was with her at the end.

How to sum up such a long and eventful life? Con was born in the East London suburb of Goodmayes, Ilford, the youngest of a family of four. Her father was the manager of a small stockbrokers in the City. He read the Daily Telegraph and voted Tory, while my grandmother came from a Labour family and read the Daily Herald.

Con wrote poetry from an early age and had some of her work published in Poetry Review while still in her teens. She joined the YCL and Communist Party of Great Britain when she was going on 17 and took an active part in CPGB events in Ilford, where she sold the Daily Worker and performed in agit-prop theatre. It was while practising for one of the local agit-prop shows that she met my father, former International Brigader Harry Fraser. They were married in October 1940, just short of Con’s nineteenth birthday.

During the Second World War Con trained at a government training centre as a blue-print bench-press fitter, cutting out one-off specialist parts for the RAF’s fighters and bombers. When she completed her course and was looking for a job, she told the Training Centre manager that she had been trained for a man's job and would have a man’s pay. Needless to say, she got it. While at work, she stood up for the rights of Jewish refugees, who were being swindled out of their rightful rations.

Con joined the Labour Party in the late 1950’s, and twice stood for the parish council in Chalfont St. Peter where the family then lived. Unfortunately it was a Tory stronghold, so local people were deprived of the opportunity of having a councillor who would have stood up for the interests of ordinary people. Con remained a Labour Party member until the Iraq War, when she left in protest like many others who opposed that bloody imperialist invasion.

In the 1960's, she became a member of the Royal Court Writers' Group, and had plays put on there and at the Questor's Theatre, Ealing. In the early 1970’s, she took a two-year course at the Co-operative College in Loughborough, having left school with no formal qualifications. Then she enrolled at Sussex University where she completed a B.A. in social anthropology. She became a tutor at the Open University where her students thought very highly of her. She also taught creative writing for the WEA. My parents moved to Brighton, where Con took on a local Morning Star round, and was active in the peace movement and the British-Soviet Friendship Society. It was after the collapse of the Soviet Union that Con became active in the local Cuba Solidarity Campaign in Brighton.

Local Brighton members may remember Con from the beach front days, where Brighton CSC put on dance performances and sold food. She set up and ran stalls at the Hanover Festival and at venues in central Brighton. She was a leading light at the annual garden party and took on most of the officer jobs over the years, from social secretary through to treasurer. She wrote letters to the Miami 5 Heroes during their long years of incarceration in US prisons, in particular to Antonio
Guerrero who shared with Con a mutual passion for poetry. She wrote two poems for or about Cuba, which are reproduced below. In later years she wrote a different poem in praise of Robbie Burns each year, which she read out at the annual José Marti lunch. Some of them were quite saucy!

In 2002 Con made a brief visit to Cuba, with daughter Pauline, when she was eighty. There she met two of the Cuban International Brigaders who Pauline had met earlier in the year at an International Brigade reunion in Madrid. Con and Pauline visited a special school in Havana where they donated items for the children there and visited the FMC, the Cuban Women’s Federation. Con found her week on the island all too short and endlessly interesting and a report of their visit was published in ‘Cuba Si!’

A great internationalist and a lifelong campaigner for peace, justice and socialism, Con was an inspiration to many and will be sadly missed by family and friends. 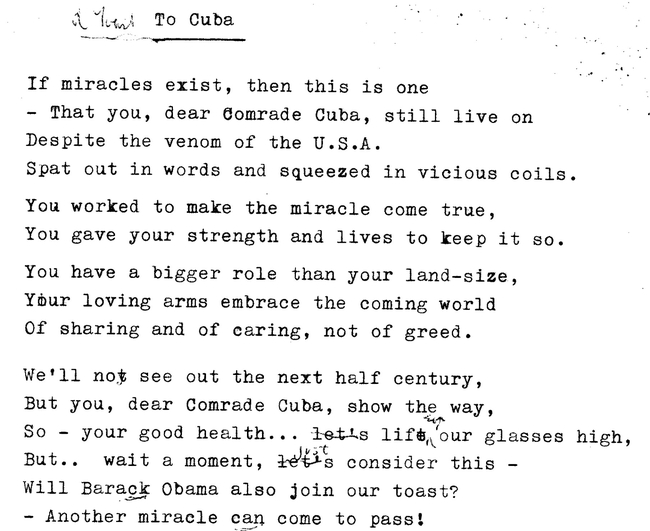 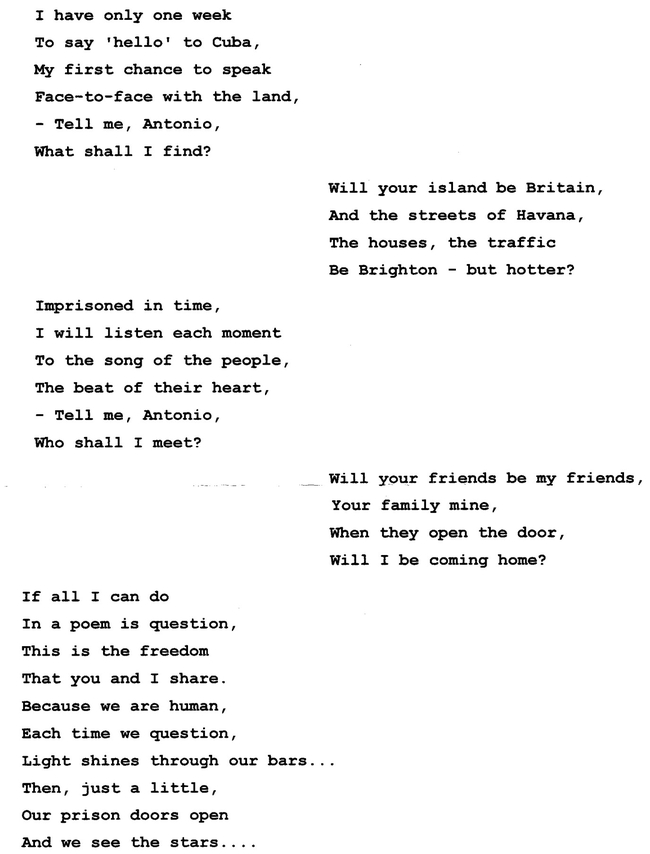