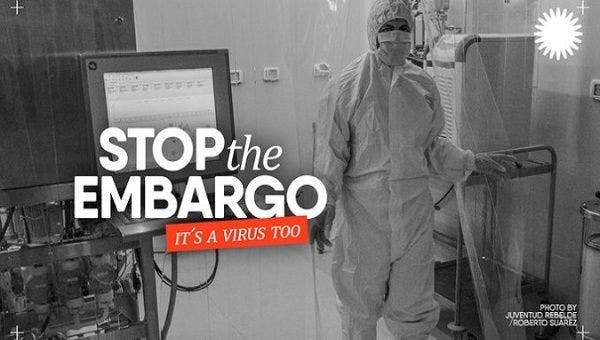 Regular suppliers refuse to trade with Cuba, fearing retaliation from the United States

In his Twitter account, the Cuban Minister stated that the 60-year-old embargo against the Caribbean country seriously harms Cuba's ability to face the worst world crisis in a century.

Cuba's Biotechnological and Pharmaceutical Industries Business Group (BioCubaFarma) stated U.S. inhuman sanctions against Cuba and Iran, have hampered cooperation with Iran's Pasteur Institute for the development and production of Sovereign 02, one of the Cuban vaccines against COVID-19.

"The usual suppliers refused to sell to us, fearing the impact that the brutal embargo could cause to their companies," the group stated, referring to the essential materials required to manufacture Soberana 02.

The effects of the embargo are not only quantified in the billions of dollars it costs to the Cuban economy but in the suffering caused to over 11 million Cubans and thousands of families on both sides of the Florida Straits, who cannot help each other or reunite due to the hate of a small group of anti-Cuban U.S. politicians such as Senators Marcos Rubio and Ted Cruz.

The Trump Administration (2017-2021) passed 243 sanctions against the unstable and already damaged Cuban economy with the explicit purpose of fostering chaos and misery among the Cuban population.

Of them, Fifty-five were enforced during COVID-19 times, which proves the lack of humanism of some U.S. politicians, to whom current President Joe Biden keeps paying ears.

Despite promising a change in his policy toward the island, Biden has not lifted a finger in that direction and continues to turn a blind eye to his voters and U.S. senators' frequent statements on the need for an immediate change.

Donate to our COVID-19 Medical Appeal for Cuba here: